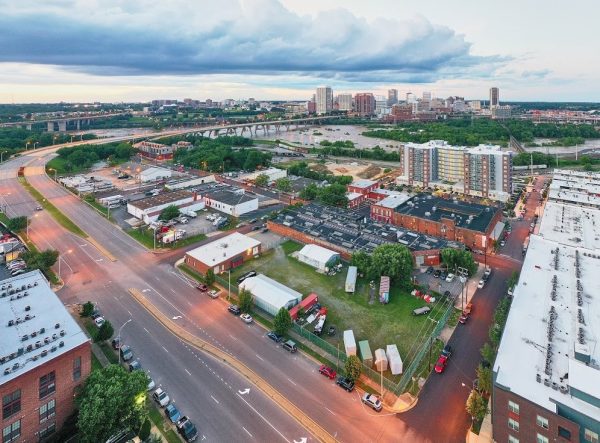 The center property is subjected to a rezoning from B-7 to B-4 to allow for more density and taller buildings. (Dan Price Photography)

What is now an industrial yard filled mostly with construction trailers and sheds soon could give way to a mixed-use development high-rise in Manchester.

Brent Graves of Manchester Properties LLC is seeking to rezone a collection of properties at 710 Perry St.; 201, 209 and 213 W. Commerce St.; and 715 Porter St. to B-4 Central Business District, which allows for greater density, taller building heights, flexibility with parking requirements, and a mix of residential and commercial uses.

The nearly 1-acre property mostly fronts West Commerce Street and sits in front of the Trolley Lofts Apartments on the same block bounded by Perry, Porter and West Seventh streets.

The site houses the office of Taylor & Parrish Construction, a century-old business that Graves and his family had a stake in until last year and which has had a presence at the site since the 1960s.

Graves sold his controlling interest in Taylor & Parrish last year, while maintaining his ownership of the real estate. Taylor & Parrish is preparing to vacate the Manchester site for the suburbs after leasing about 4,400 square feet at 3942 Deep Rock Road in Henrico.

“Before they moved to Manchester, they were at Second and Canal streets,” Graves said of Taylor & Parrish’s history in the neighborhood. “They built the Downtown Expressway through the city of Richmond, and had to relocate to this neighborhood roughly around 1968.”

Graves was a 4-year-old at the time his family’s business relocated and he recalled how the neighborhood has changed in the face of nonstop development.

“It’s certainly no place for a general contracting storage yard,” Graves said. “Maybe decades ago when you had so much industry on this side of the river, but not now.”

Time for a change 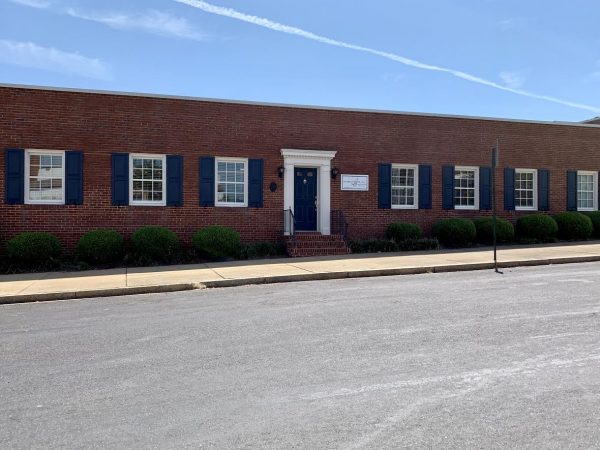 Taylor & Parrish Construction offices have been a mainstay in Manchester for nearly 51 years. It’s preparing to move to Henrico County as the site could be redeveloped into a mixed-use high-rise development. (J. Elias O’Neal)

He said now is the time to transform the site into something more useful to the neighborhood given its rapid transformation from an industrial hub to a residential area.

“There’s been so much growth in Manchester that it seemed like the right time to get this started,” Graves said. “There is a lot of opportunity for something meaningful to be developed on this site … but before we can consider anything, we’ve got to address the zoning.”

While no development plans have been submitted for the site, Graves envisions a mixed-use project with garage parking on-site, street-level retail with an anchor tenant, office uses and residential units above.

“The potential is there for an office user, potentially even a grocery store,” Graves said. “I think there’s no question residential has to be a part of this, but the market will dictate how many units are part of the project.”

All five parcels are zoned B-7 business district, a designation they have had for about 10 years that allowed residential development to occur around it.

“The B-7 is a transitional district,” said Lory Markham, a local land-use consultant and One South Commercial agent who is handling Graves’ rezoning request with the city. “B-7 allowed for existing industry to stay, but also allowed residential uses, which is very unusual in zoning.”

It worked, ushering in a wave of residential development into Manchester, while limiting new industry from moving in next door.

While B-7 would allow for mixed-use development, it also would limit the height of the building and place parking requirements on the future project.

The B-4 zoning, Graves said, “is the highest and best use to transition the property.”

B-4 zoning has caught on with several prominent developers in Manchester, including with Richmond-based Lynx Ventures’ $68 million, two-building office, retail and residential project dubbed The Current, which will rise on a 2-acre surface lot at 400 Hull St.

Both the city Planning Commission and City Council are slated to take up Graves’ rezoning request around year-end, Markham said.

If granted, Graves plans to develop the site through his Manchester Properties. He added he is working with Commonwealth Commercial’s Kit Tyler to help him explore potential development and leasing options.

“I’m exploring several possibilities, and have been approached by several people interested in the site,” Graves said.

Graves is no stranger to development, given Taylor & Parrish’s hand in helping construct projects such as Markel | Eagle Partners’ GreenGate in Short Pump and Cary Street Station in Carytown.

“There’s a bigger narrative happening in Manchester that makes whatever happens on this site so important,” Graves said. “I think Manchester will eventually become a ‘City of the Future,’ … and hopefully this in turn will allow the neighborhood to continue to evolve into an integral part of the overall future of Richmond and downtown.”

Looks like an excellent plan to achieve highest and best use! This could make a beautiful entrance to Manchester from Downtown.

Whatever they do it’s going to be an improvement. Let’s hope it’s something remarkable.

Seems like Brent’s got a great vision for this site. Can’t wait to see how it turns out.

One of these days the “retail” for the project will actually occur! City View promised 36,000 sq ft plus a grocery store in 2016 (named Whole Foods, Fresh Market as examples they said) and now the leasing is for under 14,000 sq ft retail /restaurant space amid 375,000 sq ft of office and probably 1 million sq ft in apt space. This retail is three SMALL storefronts that equal the interior size of three McDonald’s. And 2 acres for a “grocery store parcel” is not even planned for a spec build out. Now we are talking about this as a… Read more »