TRP purchased the 0.6-acre property at the corner of Broad and North Thompson streets in July 2018 for $831,000, city property records show. 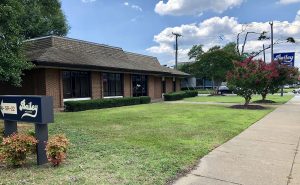 Preliminary plans filed Aug. 30 call for the existing one-story structure, which previously housed an auto insurance office, to be razed and replaced. Much of the clinic would occupy about 8,000 square feet on the first level of the building with several dialysis stations, a lobby area, nurse stations, offices and a conference room. The second level would include a 530-square-foot office.

An employee-only entrance would front Broad Street, according to site plans, while a patient entrance is planned along Thompson Street. Much of the facility’s 36 parking spaces would be located on the east and south sides of the property.

Fresenius Kidney Care, a division of Fresenius Medical Care, based in Germany, provides kidney dialysis through a network of more than 2,000 clinics across the U.S., including seven centers in metro Richmond. The company could not be reached for comment about the project.

Fronting Broad Street along the Pulse rapid transit bus line, the property was rezoned TOD-1, or “transit-oriented nodal district,” a couple years ago. The zoning designation was created to entice developers to construct taller, midrise development along the Boulevard, Myers Street and Broad Street corridors that border Scott’s Addition to the east and south.

TRP principal Jason Guillot said the firm envisioned a denser office project on the site when it purchased the property last year. But limited street parking, existing power lines, and the lot’s size and shape made it difficult to add height and width to the development — forcing the group to scale back its desired density, he said.

Guillot said Fresenius is entering into a long-term lease to operate on the site once the building is constructed. Construction could begin during the first quarter of 2020, Guillot said. He did not disclose a project cost. 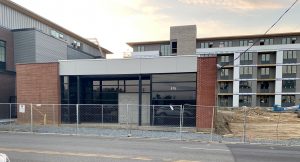 Thalhimer Reality Partners purchased the the building at 515 Hull St. as part of its City View Landing development in Manchester. (J. Elias O’Neal)

The project adds to TRP’s growing list of developments around the city, including at its City View Landing development underway along Hull Street in Manchester.

As part of its $25 million expansion of that development, which includes 161 apartments and 13,300 square feet of ground-level commercial space, TRP recently acquired a one-story, nearly 4,000-square foot building at 515 Hull St. for $775,000, according to city property records.

The transaction was recorded Sept. 23. The vacant building at one time housed Big River Advertising.

It’s a shame a development using so many parking spaces and with such a small footprint at 8.5k sq. ft. is going here. We don’t necessarily need more apartments in this vicinity but it would have been great to see the site built out and up more given the pulse being right there.

Agreed and sorry one could relocate the power lines. This is a cheap design and major under use of this property. And no public entrance on Broad? This to me is almost as bad as the newer McDonalds at Hull and Commerce!

GRTC reduced the frequency of many routes and eliminated a lot of stops in my neighborhood to make the Pulse possible. A recent study revealed the Pulse is hemorrhaging money at an alarming rate because so many people apparently choose to ride without paying. A more appropriate name for this zone would be the “entitled millennial-oriented district”.

A recent study said if you reference a “recent study” you really should link to it to support the validity of your statement.

Agreed.
People who are “using Pulse without paying” are VCU students and faculty, and VCU paid to have them on board.
Mr. pugh, Im sorry bus service was curtailed in your area, but do you really want millenials and breweries in your neighborhood?

There are almost monthly articles in Richmond regarding fare evasion, low income rider targeting and adding inspectors or not.

I don’t know if the losing money overall has been shown, but a significant number of riders choosing to ride for free “ie stealing” is monthly news on most major Richmond outlets

I didn’t see that mentioned , although with that poor lady getting hit the results are skewed

there is nothing wrong with a millenial district. Speaking as someone who is way too old to be a millenial.

I don’t mind the architecture, but the fact there is no entrance on Broad is the worst of modern architecture – it’s an attack on the streetscape. I hope they improve that with some thought about the built environment. A bit of an embarrassment for Fultz & Singh from whom I would expect better

Thanks for the comment and observation. We iterated several schemes on this, and ultimately are responding to program needs here. Their main entry is a drop off for patients, which in this scheme is the rear which is more protected. We built in flexibility with the window and storefront module so that any future street retail use could easily be incorporated if needed, as we hope the building will be built to last. The glass corner also has another entry not visible in the rendering.

I understand the programmatic needs, but still feel this building ignores the street as depicted here. Good architecture should enhance the built environment, especially in an urban area. Currently this looks like it belongs in a nice office park.

ha check out the classic Mustang in the rendering

…and the smoke coming from the rear tires. LET’S GO BRO!