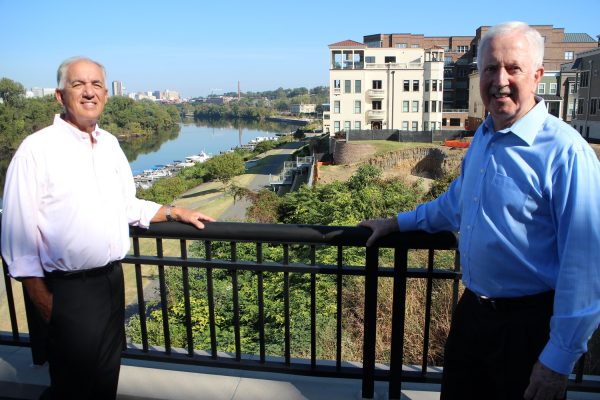 From their riverfront condos in Rocketts Landing, Ken Aspinall and Grant Grayson have had a front-row view of nothing happening with a roughly quarter-acre tract in the heart of the massive mixed-use development.

So, they took it upon themselves to change that.

Aspinall, a former paper company executive, and Grayson, a lawyer at Whiteford Taylor Preston, are developing the land for five new townhomes that Grayson said will finish out the first phase of Rocketts, which has been going gangbusters of late with new residential development.

The neighbors formed an LLC and struck a deal over the summer with Rocketts developer WVS Cos. to purchase the land for $1 million, and they’ve enlisted Eagle Construction of VA to build the homes, which are each set to be priced above $1 million. 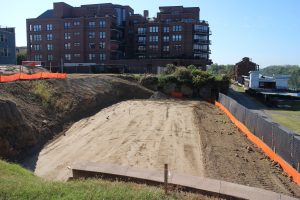 Site work for the townhomes started in recent weeks.

Site work got underway a few weeks ago, and four of the five homes are already sold, with Grayson among the buyers – he and his wife will be swapping their condo next door for one of the new units.

While they’ve done their share of investing over the years, Grayson said this is the first go at residential development for him and Aspinall, who owned paper manufacturer Manchester Industries before selling the company last year.

“We do lots of different kinds of investing, but we certainly didn’t know how to build homes like that,” Grayson said. “I had always been good friends with the folks at Eagle and have a great respect for them.

“I contacted them and said, ‘Would you guys be interested in taking a look at this?’ They said that they certainly would, especially because they were about ready to move into the city and had some property in Manchester.”

Referring to McRae & Lacy, a 26-townhome development that Eagle is building along Seventh Street in Manchester, Grayson noted the timing was opportune for Eagle, which has been making inroads into the city with projects downtown after decades of suburban development, such as its GreenGate mixed-use development near Short Pump.

Eagle President Josh Goldschmidt said the company jumped at the chance to build townhomes at Rocketts, a decade-old redevelopment that has picked up steam in recent years on its 50 acres that straddle the Richmond-Henrico County line.

“Their awareness of GreenGate made us a viable candidate,” Goldschmidt said, referring to Grayson and Aspinall. “It was a really good opportunity to take what we’ve been doing at GreenGate, and we’ve started to look at some of these smaller infill projects in Manchester and the city. This one’s Henrico County, but this was the first one that was the furthest along, so the timing was really good.”

The homes will range from 3,300 to 4,000 square feet, with varying numbers of bedrooms and bathrooms, rooftop decks, and terraces with accordion walls for indoor-outdoor living spaces. Each unit also will have a rear-loaded two-car garage. 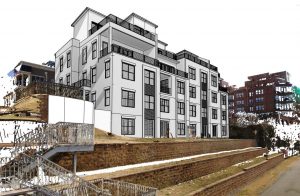 A renderings of the townhomes, which will feature rooftop decks, rear-loading garages and terraces with accordion walls. (Eagle Construction of VA)

Grayson said they were able to line up the three other buyers through prospects who had signed on for a previous development that never went forward. They’re seeking a buyer for the fifth unit, which Aspinall does not expect will be difficult.

“With the Capital Trail in now and with the marina here, this has got to be one of the best parcels of property on the north side of the river,” Aspinall said. “You’re not obstructed by a flood wall; you no longer have the train tracks. The amount of activity down here on the weekend is just phenomenal. I think it’s just going to add to it.”

Added Grayson: “In the Richmond market, there aren’t at any one time that many houses at that price point, so it was a leap of faith taking on the project that we could have those homes sold in that price range. We were delighted we had all four of those under contract before we closed on the purchase of the land.”

Positioned on a bluff at the foot of Rocketts Way, overlooking the river just uphill from the Virginia Capital Trail, the site has proven a challenging location to develop, Grayson said.

“There’s almost no room to work around the property, because it’s fully developed, so staging construction has been very difficult,” he said. “Fortunately, WVS has been really accommodating to help us figure out where we can store materials and what we do about parking and access.” 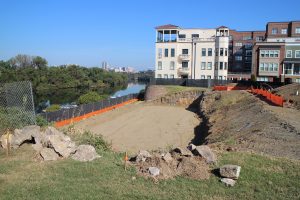 The history of the site, particularly its waterfront location, has factored heavily into the development process.

Grayson said the history of the site – dating back to marine industrial use in the 1800s – also has factored into the project.

“You’re dealing in soil that has been on the waterfront and been in some sort of use for a couple hundred years, so we didn’t know what we would find when we started digging the hole and haven’t had any unpleasant surprises,” he said. “The logistics of it are pretty interesting.

Grayson said they’re aiming for construction to be completed in April 2020. He said they’re happy their project is contributing to the rebirth occurring at Rocketts and across the city. Just south of their site, HHHunt is preparing to build a new apartment building, and Stanley Martin Homes has started work on a block of condos called Riverwalk at Rocketts Landing.

“These houses are actually in Henrico, they’re right over the line, but it’s been really interesting to watch the city and the immediate surroundings of the city develop,” he said. “To have a chance to be a part of it and help deliver a product that is in demand and people will enjoy it, it’s really been pleasing for me to see that and play a little role in something like this happening.”