The view from the south of the Rocketts Landing development, where the next phase of development is planned. Photo by Jonathan Spiers.

Following months of apparent inactivity, preparations are progressing for the next phase of development at Rocketts Landing.

Construction plans filed in recent weeks with Henrico County show the next group of townhomes to be constructed by HHHunt Homes, which built the first wave of townhomes at the riverside mixed-use development that straddles the Henrico-Richmond line along Route 5, where East Main Street turns into Old Osbourne Turnpike.

Some of the 47 new townhomes will be similar to those built in 2014, with three-bedroom units 20 feet wide and ranging from 1,800 to 2,100 square feet. The three-level units, which will include garages accessible from an adjacent alley, will start in the mid-$300,000s. Plans show some units will include balconies and rooftop terraces.

The rest of the three-bedroom units will be larger – 24 feet in width – ranging from 2,600 to 3,000 square feet and starting in the low $400,000s. To be built on a downslope, those units will total four levels and underground garages accessible from the rear – a new product for HHHunt, said division manager Patrick McCarthy. 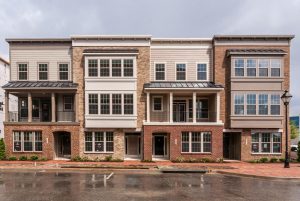 Some of the 47 planned townhomes will be similar to those built in 2014 along Route 5. Credit: HHHunt Homes.

McCarthy said the townhomes built thus far have been well received by buyers, and he said about 50 prospective buyers have requested to be notified of the new units.

“They’ve been very successful for us. We sell them as quick as we build them,” he said. “It’s a unique product and they’re really catching on.”

The townhomes cannot be built, however, until the development finalizes a water and sewer utility agreement with the City of Richmond and Henrico County – a process McCarthy said has delayed the project about a year.

“It’s put us behind schedule around 12 months,” McCarthy said. “But the developer’s done a great job of keeping us abreast of developments as they happen.”

Richard Souter, executive vice president of Rocketts Landing developer The WVS Companies, said the process for securing water and sewer utilities for the next phase of the development, which calls for an additional 156 apartments, has taken longer than anticipated. But he said an agreement with the city on the sewer utilities specifically could be finalized in the next two to three months.

“Until we get the water and sewer resolved, we’re not in a position to push the project forward,” Souter said, adding that the project is on track to get underway by the end of this year.

Started in the mid-2000s, Rocketts Landing remains less than halfway built-out. When the first wave of townhomes was built two years ago, only 12 of its 50 acres had been developed.

Recent construction has included the higher-priced Riverbank Terraces at Rocketts Landing townhomes, the first phase of which wrapped up last year with the sale of the priciest unit for $1.87 million.

In addition to the apartments and next group of townhomes, plans call for additional riverfront restaurants, other retail and more dwellings, according to a map on the development’s website. Late last month, Urban Farmhouse opened its doors as the latest retail addition at Rocketts Landing.

A master plan approved in 2012 for the next phase of development – an 8.6-acre area called Land Bay 5, bordered on the south by Old Hudson Street – called for as many as 310 residential units and 120,000 square feet of commercial and office space.

McCarthy said development on the townhomes portion is set to start within the next few months, with the developer starting site work and HHHunt purchasing lots by November or December and starting construction by the end of the year. He said units would be built as buyers purchase them, and he said build-out is anticipated within an 18-month period.

Noting the 50 or so names on the waiting list for the townhomes, McCarthy said: “A lot of people are just waiting for the project, so we’re excited about the product once we get out there.”

Yet another article extolling the rebirth of Richmonds East End. Bring it on! We need both for-sale and Class A rentals in that part of the City. We were fortunate such a strong and responsible landlord took control of that development prior to the recession.

Absolutely correct, we need more luxury apartments and high end living in that area, about time the respectable people of Richmond reclaim such a wonderful part of our city. I applaud this developers bravery and courage, this is what America is all about.