The bank this month received approval from state and federal regulators to establish a branch at 5205 W. Broad St., the long-dormant Extra Billy’s Barbecue site at Willow Lawn.

The Virginia Bureau of Financial Institutions and the federal Office of the Comptroller of the Currency each signed off on the bank’s application on Oct. 8.

Chase, according to plans filed this summer with Henrico County, would look to raze the aging restaurant building to make way for a from-scratch, 2,900-square-foot bank branch fronting Broad Street.

The company has yet to comment in detail about its plans and it remains unclear whether Chase would purchase the property or lease it from its current owner, Eastern Shore Real Estate Co.

The 0.8-acre site most recently was assessed at $806,000. That property has been dark since Extra Billy’s closed in spring 2018 after 33 years in business.

The Willow Lawn branch would include a two-lane drive-thru with an ATM and 31 parking spaces. The bank can build the branch by right, as the property is already zoned B-2, which allows for bank branches. 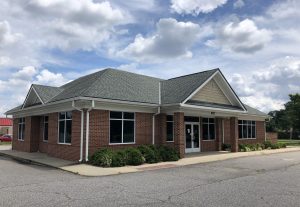 Chase Bank is looking to take over the former BB&T branch at the corner of Staples Mill and Parham roads. (Michael Schwartz)

The Broad Street site is one of two branches Chase has in the works locally. Last month it received regulatory approval for its planned location at 8727 Staples Mill Road, in a long-vacant BB&T outpost.

Chase’s parent company, the $2.6 trillion J.P.Morgan Chase & Co., has had a commercial banking presence in Richmond for about 10 years, but has yet to establish a retail branch location. Its push into Richmond is part of broader plans to open 50 retail locations in five years in what it calls Greater Washington, which includes Richmond.