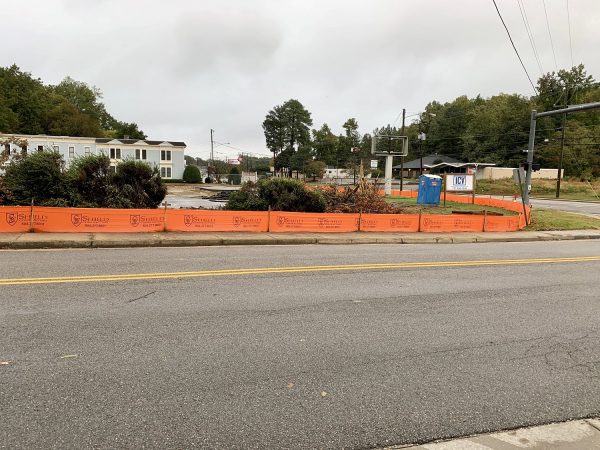 Construction on a new Starbucks with a drive-thru is underway on Forest Hill Avenue. (Photos by J. Elias O’Neal)

A national burger joint soon will be stuffing itself into a Southside shopping center, taking over for a coffee shop chain that is moving across the street.

Five Guys Burgers and Fries will fill about 2,700 square feet that Starbucks occupies at 7017 Forest Hill Ave. in the Publix- and Target-anchored Shops at Stratford Hills. 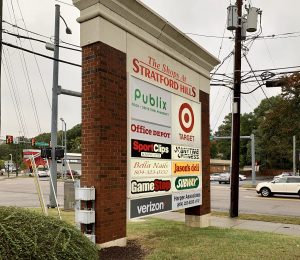 Five Guys Burger and Fries is opening up at The Shops at Stratford Hills.

Starbucks will vacate the storefront in favor of a 2,600-square-foot standalone store with a drive-thru that’s under construction at 6980 Forest Hill Ave., where a BB&T bank branch previously stood.

The Forest Hill location would be Five Guys’ only spot South Richmond and second in the city, adding to its location near VCU at 931 W. Broad St. And it marks a return for the chain to the Shops at Stratford Hills. It was one of the shopping center’s earlier tenants but moved out a few years ago.

Thalhimer’s Jim Ashby and Reilly Marchant represented the landlord in the deal. Ashby said the burger joint would begin moving into the space after Starbucks leaves, although he could not disclose when that may occur.

Five Guys, along with Shops at Stratford Hills owner Harper Associates, could not be reached for comment Friday afternoon.

A long-term lease for the future Starbucks site was completed by Thalhimer brokers Nicki Jassy and Pete Waldbauer.

“The Forest Hill location would be Five Guys’ first in South Richmond and second in the city.” – Not exactly; they were in the same shopping center before and vacated four years ago when they moved to Chesterfield Towne Center. Nice to see them coming back! They’ve been missed.

What Dan said…It was in that shopping center when it opening and I hear it relocated the same reason Tropical Smoothie, Moes, Cold Stone, SweetFROG and other chains left the immediate corridor. the foot traffic just was not there to support the location. Hope it does better this time around.