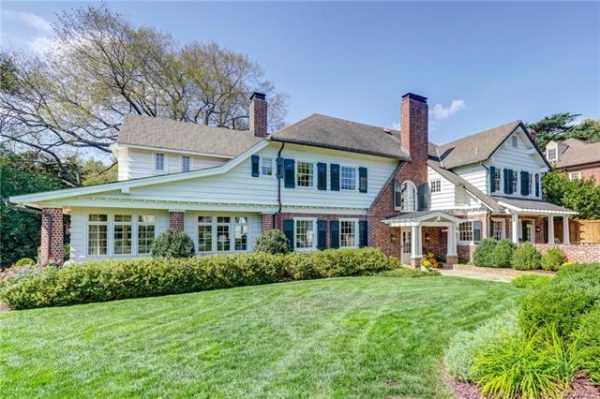 A CCV-area residence that until recently was tied directly to members of a prominent Richmond family wasted little time in lining up a buyer.

The 6,000-square-foot house at 5900 Three Chopt Road, between the Country Club of Virginia and St. Catherine’s School, went under contract the day after showings began for the $2.1 million listing. It hit the market Sept. 30 with a no-show period that expired Oct. 15.

Until August, the four-bedroom, 4½-bathroom home had been owned directly by Matt and Kirsti Goodwin, who purchased it in 2009 for $1.4 million, city property records show. Ownership of the property then was put into an LLC. 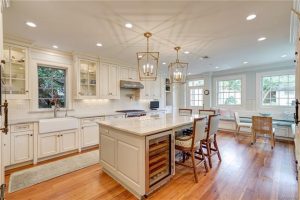 The kitchen at the Three Chopt home.

Matt is a son of local philanthropists Bill and Alice Goodwin, and a principal at his father’s Riverstone Group, whose holdings include The Jefferson Hotel and the James Center. Kirsti has worked in investment management and serves on the board of trustees for The Virginia Home.

The couple has built a new house beside Bill and Alice’s 12-acre estate near the University of Richmond, on land where an 80-year-old mansion was demolished after it was purchased in 2016 for $5.5 million. The off-market deal was one of the priciest home sales in the Richmond area in years.

The new house, totaling 12,000 square feet, had an estimated valuation of $2.72 million when plans were filed with Henrico County in 2017. 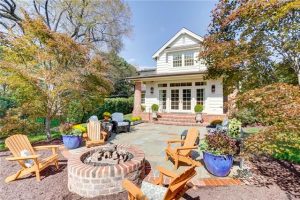 Totaling 11 rooms, the two-story, three-level house is on three-quarters of an acre, on a corner lot at Three Chopt and St. Catherine’s Lane.

Built in 1909, the 100-year-old house has a master suite with walk-in closets, adjoining office and bathroom with steam shower, jetted tub and separate vanities. The house includes a top-floor rec room, three fireplaces, two wet bars and a sunroom. The grounds include a bluestone patio with gas firepit and a two-car detached garage.

The latest city assessment valued the property at $1.8 million.

The house was one of several multimillion-dollar listings to hit the market in recent weeks. Earlier this month, a 7,800-square-foot home at 1825 Monument Ave. was listed at $2.15 million, while a 7,100-square-foot Georgian Revival at 5111 Cary Street Road was listed at $3.15 million the next day. The Monument house has since been taken off the market, while the Cary Street Road listing remains active.

Also on Cary Street Road, the 10,000-square-foot Windemere mansion, listed in March at $3.42 million, was put under contract this week. SRMF Real Estate’s Mahood Fonville has that listing.