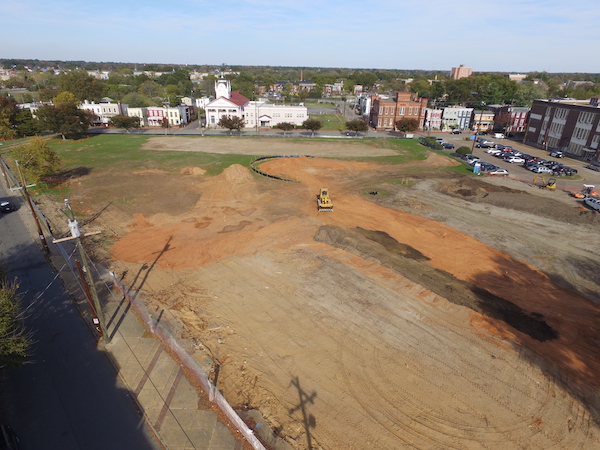 The site of an old gazebo is pictured in the foreground. It’s being replaced with a pavilion. (Michael Schwartz)

With fencing up and bulldozers humming, the renovation of a Jackson Ward park is underway.

Abner Clay Park at 501 Brook Road is getting a $1.3 million renovation that will include a new grass field, pavilion and basketball court.

The city began work on the 4-acre site in September with the demolition of a gazebo that was near the intersection of West Clay Street and Brook Road.

Crews also have begun tearing up the park’s main feature – a large field that’s being replaced with new grass to be used as a multi-use sports field and lawn event space. A public art display is also part of the renovation project. 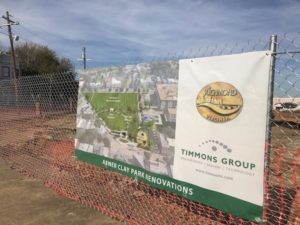 Work on the park is set to be completed in Sept. 2020. (Mike Platania)

Tamara Jenkins, spokeswoman for the Richmond Department of Parks, Recreation and Community Facilities, said the project is scheduled to be finished by September 2020.

The renovation of Abner Clay Park has been in the works for years but started gaining steam last year when local engineering firm Timmons Group submitted plans to the city.

While much of the park has been closed and fenced off during construction, its children’s playground along West Clay remains open.

Another complete waste of tax dollars; it will looks a improved as Monroe Park, Kanawha Plaza, and 17th Street Market space. The only change post construction will be no mature trees and a pavilion instead of a gazebo. Who starts a park renovation but gutting it down to dirt. And like the other three I am sure it will end over budget and be closed for 2-3 years.

Sweeping generalization??? And many, many times the City has screwed up our parks and open spaces. One can argue on Monroe but Kanawha Plaza and 17th Street are disaster with millions spent and very little to show or any use. And I haven’t heard about anybody being rescued from Abner Clay Park during a flood but I do know that people have to be rescued from their cars in Southside. Why is the priority to spend limit capital fund dollars to close another park for rehab over say addressing street flooding/storm drainage in neighborhoods? Do they really know this problem… Read more »

From the 2018 article linked in the story above:” The project’s cost has not yet been determined, but the application estimates it will be between $850,000 and $1 million. Some of that will be covered by $556,000 that’s readily available in Abner Clay’s progress account with the city…. ”’ “He [Jay Som}added that with the bulk of the funding already in place, the timeline for construction depends on securing the remaining money, which may come from private sources. “It’s completely contingent on financing,” Som said. “(The city’s parks department) thinks it’s a very doable project with a budget. We’re trying… Read more »