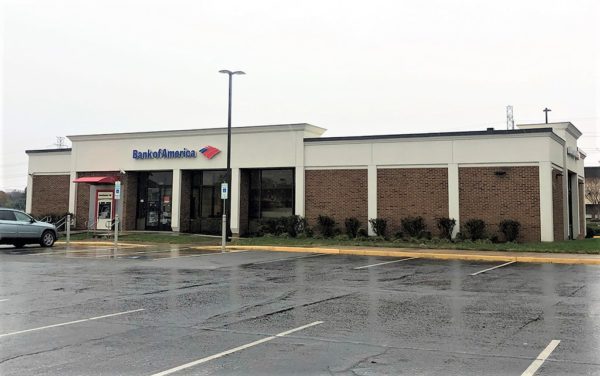 The Bank of America branch at 7203 Midlothian Turnpike is slated for closure. (Michael Schwartz)

Another bank is trimming its branch count in Chesterfield.

Bank of America plans to close its location at 7203 Midlothian Turnpike, a stand-alone outpost in the Stonebridge development, where the Cloverleaf Mall once stood.

BofA spokesman Andy Aldridge said the branch is being closed in favor of other nearby locations, including two miles south at 7101 Hull Street Road and four miles west at 10700 Midlothian Turnpike.

The Stonebridge branch is BofA’s smallest in the region by deposits. It held $36 million as of June 30.

The bank did not disclose the closing date for the Stonebridge branch, but has given advance notice to the Office of the Comptroller of the Currency.

BofA would have 21 branches remaining in the Richmond region following the pending closure. While that’s fewer locations than its largest competitors, the Charlotte-based bank still maintains the largest market share of local deposits, by far.

Its 22 current branches held a combined $16.27 billion in deposits as of June 30, the most recent numbers from the FDIC. That’s $10 billion more than its nearest competitor, Wells Fargo.

Beyond the closure, the future of the Stonebridge property remains unclear.

The property is owned by SLMC Richmond LLC, which state records show is tied to Shelby Loan & Mortgage Co. in Shelby, North Carolina. A message left for the ownership group was not returned by press time.

BofA’s closure is at least the third bank branch closure to be announced in recent weeks.

Last month, Midlothian-based Village Bank closed its branch at 1120 Huguenot Road in Midlothian, across from Chesterfield Towne Center. And Henrico-based Virginia Commonwealth Bank announced it plans to close its location at 1118 Courthouse Road in Chesterfield.