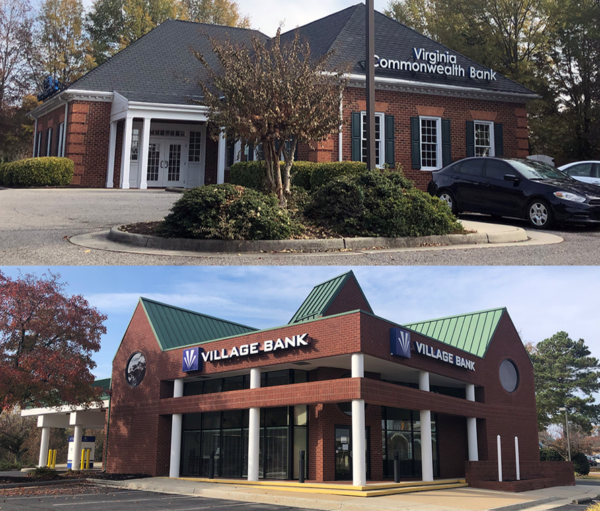 Two locally based banks each are trimming their branch counts in Chesterfield County.

Village Bank, a $559 million institution based in Midlothian, this month shut down its branch at 1120 Huguenot Road in Midlothian, across from Chesterfield Towne Center.

CEO Bill Foster said the location’s operations were consolidated into the bank’s branch at 13531 Midlothian Turnpike, about two miles west.

Foster said Village plans to continue using the Huguenot Road building for other parts of its business, just not as a retail branch.

“We own the real estate that housed the branch we closed, and we are planning to use the highly visible location for other needs of the company,” Foster said in an email. “We are currently working on those plans.”

The bank has owned the property since 2007.

The Huguenot branch held just $32 million in deposits as of June 30. That makes it the bank’s second-smallest branch based on deposit count.

A few miles south of Village’s Huguenot closure, Virginia Commonwealth Bank is planning to close its outpost at 1118 Courthouse Road.

That location is being consolidated into another VCB about four miles away at 11450 Robious Road. It’s expected to close at 3 p.m. on Feb. 6, 2020.

VCB Chief Executive Randy Greene said the consolidation is a matter of making its branch operations more efficient and cost effective. He said it costs an average of $350,000 annually to operate a branch.

The Courthouse Road branch holds $39 million in deposits – the fewest of any of the bank’s branches in the Richmond region, according to FDIC records

Greene said the bank owns the property and will put it up for sale. The branch sits on 1.3 acres and most recently was assessed by the county at $929,000. VCB has owned it since 2000.

VCB will have 17 branches after the closure next year, but that will jump up to 18 next summer when it opens its new location in Scott’s Addition, which is under construction in the new Scott’s View development.

The bank also recently expanded into the Southside of Hampton Roads with a branch at the Virginia Beach oceanfront.

And last month the bank completed a $25 million capital raise. It was a private debt offering sold to institutional investors.

The closings come at a time of shifting bank strategies as they relate to retail branches in the age of mobile and internet banking.

There were 26 banks operating a total of 302 bank branches in the Richmond region as of June 30, according to the most recent FDIC figures. That’s down from 317 at the same point last year and from 379 a decade ago.

Greene noted that banks across Virginia have closed 33 branches thus far in 2019.

That trend has included Henrico-based Essex Bank, which in recent months closed locations in Cumberland and Fairfax.

But banks aren’t completely turning their backs on branches.

In addition to VCB’s Scott’s Addition spot, locally based C&F Bank is opening its first branch in downtown Richmond in the new phase of The Lochs development along the canal. And giant Chase Bank is making its first retail push into Richmond with at least two full-service branches in the works, as well as a walk-in ATM storefront.