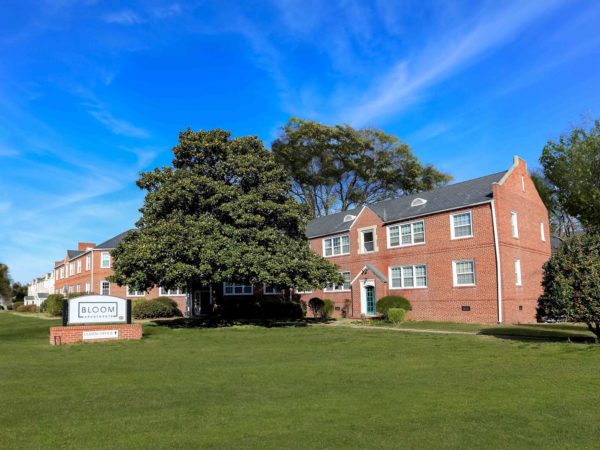 An apartment portfolio along a stretch of Chamberlayne Avenue has been rehabbed and rebranded as the Bloom Apartments. (Jonathan Spiers)

In the midst of rehabbing nearly 700 units, the owner of an apartment portfolio along a stretch of Chamberlayne Avenue is testing the market a year after picking up the properties in a court-ordered sale.

Miami-based Equishares, which has spent the past year rehabbing the 692-unit portfolio it has rebranded as the Bloom Apartments, listed the properties for sale in October through Cushman & Wakefield’s Tysons office.

Offers were due Nov. 12, and the firm is in talks with several respondents, said Cushman & Wakefield’s Jorge Rosa, who has the listing along with Anthony Liberto and Matthew Collins with the brokerage’s Mid-Atlantic Multifamily Advisory Group.

Equishares principal Matt Press said he’s exploring options while continuing to rehab the apartments, formerly known as The Flats at Ginter Park. The firm has rehabbed nearly 300 of the 692 units, with 160 rehabs currently underway and 250 remaining, Rosa said. 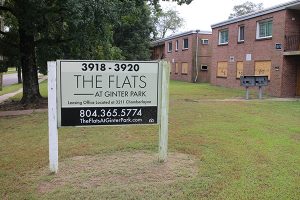 The apartments when they were branded The Flats at Ginter Park. (BizSense file photo)

“We’re exploring other options right now, including finishing off the remaining units or just selling off some of the smaller buildings,” Press said. “We’re going to make that decision probably within the next month or so.

“The neighborhood is great, and we’ve made a tremendous amount of progress. We’ve gotten many of the buildings back online.”

Press wouldn’t say how much has been spent on the upgrades so far. Rosa described the project as a multimillion-dollar effort.

Equishares placed the winning bid of $16.75 million and has been improving the properties with updated exteriors, unit upgrades and mechanical system replacements.

Rosa said the units were 50 percent occupied when Equishares took possession, then dropped to about 8 or 10 percent and now stand at about 40 percent occupancy. Totaling more than 458,000 of rentable space, the units average 664 square feet in size, with average monthly rents of $693. 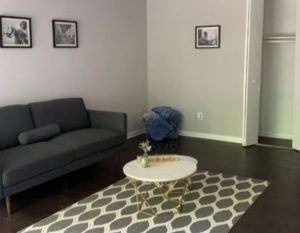 The interior of one of the apartments. (Courtesy Cushman & Wakefield | Thalhimer)

Rosa said the properties have garnered considerable interest from both local and out-of-town parties.

“We’ve had a number of national groups that have been looking at it as well as local, so it’s been a really good mix,” Rosa said. “I’d say the interest has been one of the strongest from the deals that we’ve marketed in Richmond and southern Virginia.”

If a sale goes through, he said a closing likely would occur in the first quarter of next year.