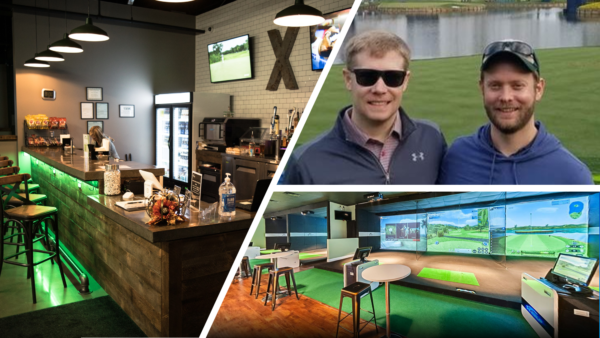 The trend of indoor golf venues continues to spread throughout Richmond, with two brothers bringing a new-to-market brand to the area.

Kyle and Josh Engelken are opening the region’s first location for X-Golf, a California-based company that sells its own brand of golf simulators, and pairs them with a food and beverage concept for franchising.

The Engelkens’ location will be housed in Westchester Commons at 15800 WC Main St. Construction is underway in the 6,000-square-foot storefront, which has been vacant since it was developed.

The Engelken brothers, who grew up in New Jersey before coming to Virginia for college, are co-owners. Josh, a 35-year-old JMU alum, is planning to work full time on the new venture. Kyle, 34 and a UR grad, will continue in his day job as CFO of local broker-dealer WealthForge. 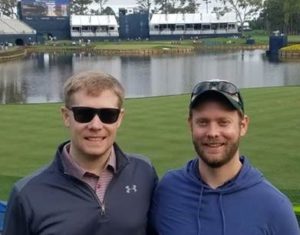 Josh said the business brings together two of their interests.

“Kyle and I have always wanted to get into business together somehow and golf has always been a passion,” he said. “We’ve been playing together most of our lives.”

He said they stumbled upon the X-Golf website two years ago and were intrigued. Then they visited an X-Golf location in Michigan before striking a deal for a territory that allows them to open franchises in Richmond and elsewhere in the state.

The Westchester Commons location will have six simulators, a full service bar and a small kitchen serving what Josh described as “better than typical bar food.”

Unlike other local golf simulator venues that often purchase popular Trackman-branded simulators, X-Golf franchises use simulators the company developed itself. They use infrared, lasers, cameras and impacts sensors to track and measure a player’s swing, while allowing users to play virtual versions of 50 well-known golf courses from around the world. 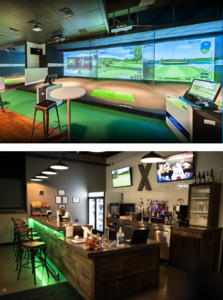 The Westchester Commons location will have six simulators, a full service bar and a small kitchen.

“It measures so many different things when you’re taking a swing, over 6,000 calculations,” Josh said.

The Engelkens and X-Golf enter a competitive Richmond golf market. In addition to golf courses and country clubs, the market is now home to at least two simulator venues, as well as the recently opened Drive Shack and Topgolf driving range and entertainment complexes.

Josh said they’re betting their location will appeal to avid golfers looking for a break from the weather and to those looking to learn the game without the pressure and at a faster pace than playing a full course outdoors.

Josh said they looked at potential locations across the region, including Scott’s Addition and Chesterfield Towne Center, before deciding on Westchester Commons. He said they were lured in part by the growth of new apartment developments nearby.

He said they’re hoping to be open in late February or early March, while the weather is still cold and before the full golf season reopens.

Josh said they’ve budgeted between $500,000 and $700,000 to open the business. They’re using an SBA loan from Atlantic Capital Bank and putting money in themselves.

In addition to Josh as full-time general manager, the new venue would employ a full-time golf pro. Once open, they’d look to hire eight to 10 part-time workers during the busier seasons.

X-Golf has 14 locations, according to its website, nine of which are in Michigan.

Josh said he and his brother may look to add to that count beyond their first location.

“Our goal, if we do well, we’ll probably expand out,” Josh said. “Not necessarily the Richmond market. Our (franchise) territory expands down into Williamsburg and up through Charlottesville.”

Love the idea, I think from a social aspect incorporating food and drink is something the other indoor simulator facilities in town are lacking. Would have loved to see it in Scott’s Addition or closer to the city, but Westchester Commons is a great location as well with easy access off of 288. Best of luck to Kyle and Josh, I will be a customer for sure!

Love it as a golfer.. but sadly will not have enough folks to turn a profit.

I will say the non-traditional golf space does seem a bit crowded. This year alone we’ve seen the opening of The Edge, Tee it Up, Drive Shack and Top Golf… The Edge and Tee it Up are going more for serious golfers looking to improve their game, whereas Drive Shack and Top Golf are clearly more in the social gathering entertainment space. X Golf seems to be a nice blend of the two. I hope you’re wrong for their sake but your skepticism is understandable!