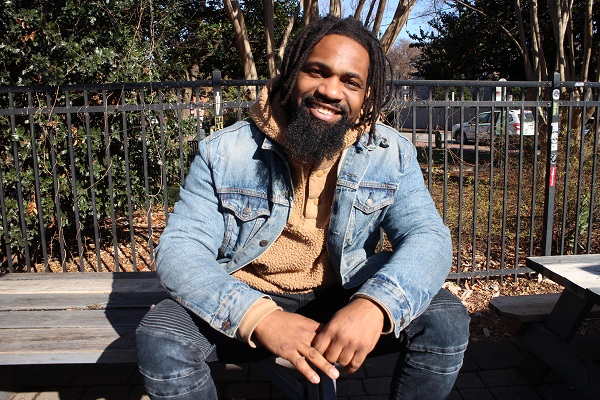 Jones’ gig crafting copy for the Fan-based ad shop isn’t so far removed from his hip-hop alter ego, who has drawn the attention of high-profile collaborators such as Drake and landed a spot on the lineup for this year’s Something in the Water, Pharrell Williams’ second annual Virginia Beach music festival.

His way with words and knack for rhymes not only feed Jones’ latest collaboration with agency head Dave King and their colleagues; it was his rapping that led Jones to a career in advertising, returning to school at age 30 to enroll in VCU’s undergraduate program.

“I got into that track, advertising, because I was working with a lot of advertising students on my music,” said Jones, now 37. “A lot of the guys who were helping me put together my album covers, shoot music videos, come up with album rollouts, they were all in the advertising school.

“I ended up seeing them do their work and it just seemed cool. I was like, this sounds fun and it’s something I would like to do,” he said.

Picking up a bachelor’s degree in strategic advertising two years ago, Jones, a father of two sets of twins, started sending out applications in search of a full-time gig that could provide a steadier stream of income than his more-sporadic paychecks from recording and performing. 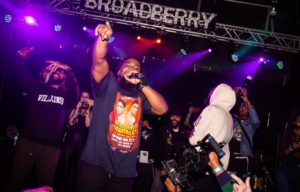 Nickelus F, aka Daniel Jones, on stage at The Broadberry. (Till Infinity Multimedia)

The same day he graduated, Jones said, he dropped his album “Stuck” – the title, like his lyrics, reflecting how he felt at that moment in his life. The title turned out to be ironic, Jones said, as the album’s tracks started picking up traction.

“Right after that, I went on three different tours all over the United States,” he said. “But the whole time I was touring, I was sending out applications and resumes.”

One of those applications made its way to The King Agency, where Jones started as a copywriter last fall.

“Dave saw some things on my portfolio that he liked, and noticed, I guess, my ability for emotional writing, and thought that was something that he might be able to use,” Jones said. “He’s also been teaching me how to sell things through writing and do good advertising, convert what I do into something that I can use to solve business problems.”

Since joining the agency, Jones has worked on accounts that include Virginia Family Dentistry, McGeorge Toyota, and First Team Auto in Virginia Beach, where King has a satellite office. His efforts have included writing blogs, social media posts and other content; as he put it: “Everything that requires words.” 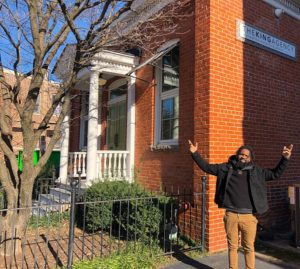 Along the way, he said his day job has informed – and inspired – his writing outside the office.

“I like the different tasks and challenges that we’re posed with, and also the deliberate thinking and planning and mood-making,” he said of his agency work. “The attention to nuance behind every word that’s required in advertising has helped me musically as well.

“Finding a job and steady income has given me a well of new inspiration, new thoughts, different outlooks and things that I could speak to,” he said. “Since then, I’ve really ramped up my recording, just writing every day and trying to really think to myself, what am I feeling right now, what are my thoughts on everything going in the world, how can I articulate them.”

That recent surge in productivity continues what Jones described as an up-and-down, off-and-on musical output since he started writing lyrics in the mid-1990s. He said he wrote his first rap in sixth grade, learned piano in high school and started recording what has since turned into a catalog of 21 recordings, including albums and mix tapes.

A military brat, Jones was born in Portland and said his family moved from city to city before settling in Richmond. A Monacan High School graduate, he initially enrolled at VCU but dropped out after a semester to pursue music – encouraged in large part by having been named in The Source magazine’s Unsigned Hype column, recognizing standout hip-hop artists without record deals.

Jones said he was lined up to get signed with record label Def Jam before an executive shakeup made the deal fall through. Despite the near-miss, he said changes in the industry and technology have allowed him to record music himself, using digital software programs such as Logic Pro, without needing to pursue a record deal. 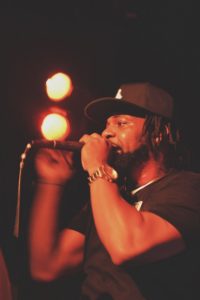 “It was disappointing, but the internet was becoming more prevalent and hip-hop websites were popping up, so there were still ways to get exposure and be heard. All of that kept it exciting,” he said. “Once I learned how to monetize myself and make money off of my music without a label, really, that’s what I wanted.”

When he’s ready to release new material, Jones said he does so via his website and social media channels.

“Instagram became my storefront,” he said. “It comes in waves, because I create in waves. I let life inspire a lot of my music, so between projects, I have to allow life to happen.

“There might be a whole year when I’m not very active publicly. I’m always creating, but publicly I’m not very active as I’m putting together the next project,” he said. “But when I drop it, I see an uptick in social media response and streaming and calls for shows, calls for features. People call me to jump on their songs a lot. That comes with a fee.”

While he no longer needs to solely rely on such fees to pay the bills and support his family, Jones said his copywriting job also is allowing him to continue playing with words, which in turn plays out in his music.

“When I started learning things like multisyllabic rhyme patterns, punchlines, incorporating metaphor and simile and alliteration – it’s always a different sort of writing device that I could play within rap that I always found fun,” Jones said.

“Whether it’s making an entire stanza rhyme with the next stanza below it, syllable for syllable – being that technical with it, it’s just fun to me,” he said. “It’s like putting together puzzles, but the words are the pieces.”

As for that stage name, Nickelus F, it’s a variation of Jones’ favorite Marvel character, Nick Fury – one of several names he’s performed under through the years.

“I picked that character because he had no actual superpowers. He couldn’t shoot beams out of his eyes or fly anything,” Jones said. “What made him special was that he was smart, he took advantage of technology, and he had an anti-aging serum.

“I like to think that I have all of those attributes,” he said, laughing. “I consider myself pretty smart, I definitely take advantage of technology, and I don’t think I look as old as I actually am.”