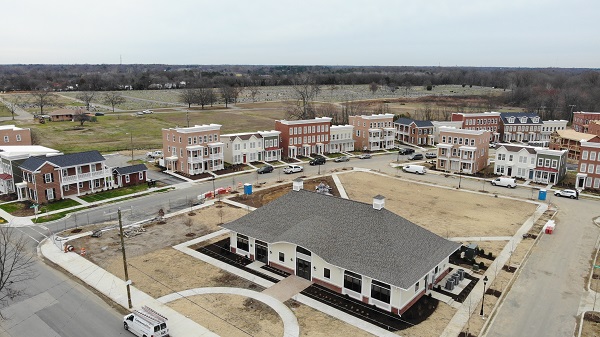 A massive redevelopment of the former Armstrong High School site in Richmond’s East End is approaching the halfway point, en route to a targeted buildout next year.

The 22-acre Church Hill North project, recently branded as Armstrong Renaissance, is taking shape on the site along North 31st Street, just south of Nine Mile Road. A mix of townhome buildings, apartments and other structures with varying facades fill the first of what’s planned to be a multiphase development totaling 256 mixed-income rental and for-sale homes.

Years in the making, the public-private project is part of a larger revitalization of the nearby Creighton Court and surrounding area, with $100 million in improvements planned for the former school site and 30-acre public housing complex, where a one-for-one replacement of 504 units is planned along with 1,000 new market-rate homes for lower-income residents. 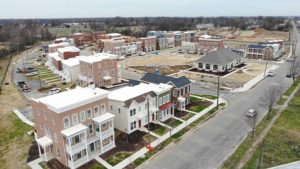 Church Hill North got underway with a groundbreaking in fall 2018 and is now 40 percent complete, with about a year and a half remaining to reach its target completion of summer 2021, said Will Paulette, project manager with contractor KBS.

The first phase has wrapped up with the completion of a 45-unit apartment building for seniors, who started moving in late last year. As of last week, the units were nearly fully occupied, Paulette said. 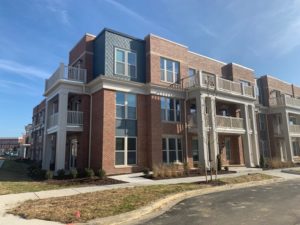 Work is nearing completion on an initial wave of townhome apartments, with 20 buildings consisting of 60 units, about half of which are occupied. A second section of 70 apartments in 25 buildings got underway in November, adding more floor plans that include one-, two- and three-bedroom layouts.

About 50 more apartments are planned to start in late summer, along with the project’s homeownership component, which is planned for 36 single-family homes. Overall, the site is planned to consist of a mix of housing types, including one-story bungalows, two-story detached homes, duplexes, townhomes, two- and three-story stacked flats and two three-story apartment buildings with elevators. 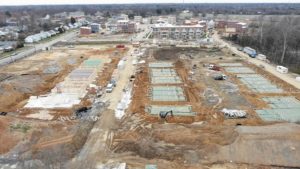 About 50 more apartments are planned to start in late summer.

Amenities include a 20,000-square-foot community center, recently completed, as well as a memorial garden, three playgrounds and additional common areas. Remnants of the former Armstrong school are being worked into the project, with a mantle from the school placed within the community center and school pavers slated for re-use as a memorial sign.

KBS won a bid put out in 2017 by The Community Builders, the Boston-based nonprofit co-developing the project with the Richmond Redevelopment and Housing Authority. Other firms involved include locally based Timmons Group, which is handling engineering work, and Maryland-based architecture firm Torti Gallas and Partners.

S.L. Nusbaum Realty Co. is leasing the rental units and handling property management, and The Community Builders is working with Better Housing Coalition on the single-family homes for purchase.

Apartments listed for Armstrong Renaissance on S.L. Nusbaum’s website include one-bedroom units ranging from about 650 to 750 square feet, with monthly rents at $1,100. A two-bedroom townhouse unit with nearly 1,000 square feet rents at about $1,500.

Funding for the project involves a mix of city, state and federal sources, including tax credits and other funding from the Virginia Housing Development Authority. Others involved include RBC Capital Markets, Chase Bank, BB&T and Federal Home Loan Bank of Atlanta.

Honest question, is $1,500 / month for a 2 bdr unit affordable for low-income residents? Are rents for these units subsidized by RRHA?

I’m assuming the prices listed are market rates. From what I understand there will be subsidized housing (I don’t believe all of the money comes from RRHA however) and market rate housing. $1500 still sounds like a lot for a small two bedroom house to be honest though.

I thought I knew every corner of the City until the moment I arrived at Armstrong North. I’d driven by Creighton Court once in 25 years but I wanted no part of it. That social engineering project of the 70’s has failed miserably. this community has the promise of something so much better. It all comes down to solid active management. That’s where the rubber meets the road in any community, owner occupied or rental, in which the management company keeps the residents engaged in making the community safe and livable. People want to live in clean, safe neighborhoods. Let’s… Read more »

Great work, as always, Jonathan. You drew out a lot more information than was offered at the Timmons event last week.