A new memorial shrine dedicated to Virginians who have been killed in several decades-long wars in the Middle East is the centerpiece of a new expansion to the Virginia War Memorial. (Photos by Jack Jacobs)

Nearly two and a half years after construction began, the Virginia War Memorial has largely polished off a multimillion-dollar expansion, marking the occasion with a dedication ceremony Saturday.

The memorial has added another 28,000 square feet of commemorative and parking facilities, with the focus on the Shrine of Memory for the Global War on Terrorism and Beyond. The shrine honors Virginians who have died since 1982 in incidents such as the Marine barracks bombing in Lebanon the following year, as well as 21st-century wars in Iraq and Afghanistan.

The project follows the memorial’s last major expansion in 2010, when it added the 18,000-square-foot Paul and Phyllis Galanti Education Center. 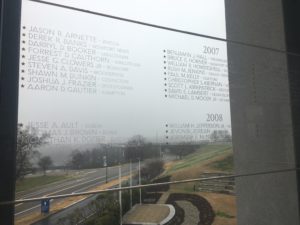 The names of close to 200 Virginians killed while serving are etched in glass at a memorial installation at the Virginia War Memorial.

Opened in 1956, the memorial honors the Virginians who have died in America’s wars. With 175 names on the glass panels of the Shrine of Memory, the addition means that almost 12,000 people are commemorated between the memorial’s two shrines, the other being the original one that features the names of those killed from World War II to the Persian Gulf War.

Memorial director Clay Mountcastle cast the expansion as a necessary step to keep it connected to Virginians’ experience of recent conflict – one that also explores the stories of Virginians at war.

“What we’re trying to be is a full, complete, living memorial. In order to do that, we have to do things like what we just recently accomplished,” he said during a media tour of the memorial Wednesday.

“This replicates the Shrine of Memory for the 20th century,” operations manager Chad Arcand said, referring to the memorial’s original shrine. “Unfortunately, we didn’t have enough space over there for additional names, and that was really the main reason for the expansion.” 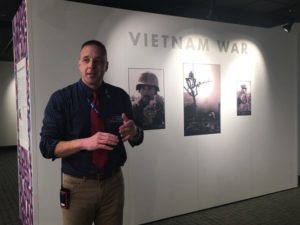 The project was funded mostly with state money. The expansion also includes the C. Kenneth Wright Pavilion, which features a 350-seat lecture hall and auditorium, more exhibition space, a gallery about Virginian Medal of Honor recipients, a distance-learning center and a veterans’ art gallery. A parking deck and underground garage also were built as part of the expansion.

KBS was the contractor for the project, and SMBW Architects designed it.

The project fell several months behind schedule. When it began in 2017, it had a target of late spring or early summer 2019 for completion.

Memorial spokesman Jeb Hockman said construction delays and a desire to stage the dedication ceremony on a noteworthy date – Saturday is the 64th anniversary of the memorial’s original dedication – were factors in the holdup.

Saturday’s ceremony starts at 10 a.m. The memorial is located at 621 S. Belvidere St.