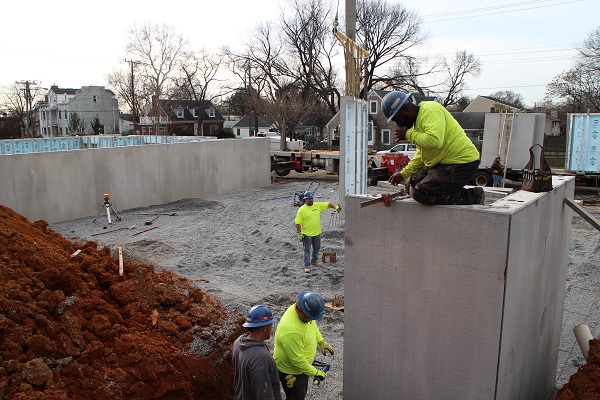 Construction has been ongoing at the Williams Townes project site as of late February. (BizSense file photo)

As the Richmond region has quieted to a hum in the last two weeks, one constant has been construction sites, many of which have stayed active.

Those sounds of heavy machinery can continue, as construction made the list – along with healthcare, food and beverage, retail and other industries – of essential businesses able to maintain onsite operations following the governor’s order to shut down non-essential businesses and schools.

On Monday, Gov. Ralph Northam signed an executive order for the closure of entertainment and recreation businesses, but exempts healthcare, grocery stores, construction firms, retail shops and restaurants, which will remain open under new guidelines as the state battles the COVID-19 pandemic. 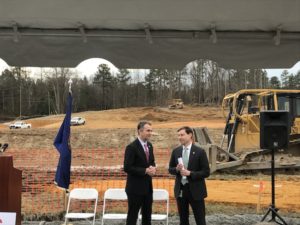 Northam also ordered all Virginia schools to be closed through the academic school year. The guidelines for business took effect (today) Tuesday and will last 30 days.

At a press conference Monday, Angela Navarro, Virginia’s deputy secretary of commerce and trade, said the constrictions do not affect the construction industry and that construction product retail stores are considered essential businesses.

Many local general contracting firms have continued site work, but have been trying to adapt as national and state guidelines rapidly change.

Monday’s announcement gives them a sense of direction, even if it’s not completely business as usual.

Mike Bell, founder of M.L. Bell Construction, said his firm had been operating as business as usual last week, but uncertainty arose when local governments began closing in the middle of last week. However, with many employing digital measures to keep inspections and permits moving, Bell said things have picked up.

“As of late last week, both the city and the counties are all doing a pretty good job of getting through their backlog, issuing permits and doing inspections,” Bell said.

“Some of our projects that we’re working on, like industrial kitchens, medical labs, manufacturing and even housing, are parts of market segments that could be critical to the recovery. … To be able to move forward with those is fantastic.”

Riverstone’s Amanda Wheeler said the reality of the pandemic’s effect hit the construction company last week after a $300,000 contract for a fitness studio was cancelled. Wheeler said she’s been watching policies in states such as New York and California to help her plan locally.

“I’m trying to stay ahead of it without hitting the panic button, and still bidding work. The great news is that the jurisdictions are staying open,” Wheeler said.

Otherwise, she said they’re trying to keep site and office work moving and staying nimble throughout the uncertainty.

“With construction, we’re so schedule-driven, and we focus on the end goal, but now everything’s a moving target. We want to make sure we’re staying on top of everything day to day,” Wheeler said.

“The contract cancellations are fear-driven and based on the unknown. What we can do is say, ‘We’re here when you’re ready,’” Wheeler said.

Non-essential retail shops can remain open but must adhere to social distancing guidelines and have 10 or fewer people inside at a time.

Northam added that the list of what’s considered essential and non-essential is not exhaustive and subject to change. The full list is available on the governor’s website.

Those required to close include entertainment and recreation services such as movie theatres, gyms and museums, as well as personal care and grooming shops such as beauty salons and barber shops, tattoo shops and spas. Though gyms and fitness centers will be shut down, Northam encouraged people to go outside and exercise.

“People have to go out, and should go out and walk around the neighborhood, go to a park, etcetera,” he said.

Northam said the point of the executive order is to limit the places where people gather in groups and that states have been left to figure out handling the pandemic on their own.

“We do not make these decisions lightly. … There is no playbook for this,” Northam said.

“The sooner we take these necessary steps to slow the spread, the sooner we will all get through this. We need to take care of each other from afar.”

Here’s some tips on how to handle yourself safely on the jobsite.
http://polycreteusa.net/polycreteusa/2020/3/17/covid19-jobsite-health-tips-1

Utilities (sewer and water) of Chesterfield County and I am sure of the other counties and RVA are still working as essential personnel. While Chesterfield has most of the County workers at home, paid for it too, my husband and others in Utilities are going to work everyday. They are there to make sure the sewers, pump stations, stay working, and water keeps flowing for customers.