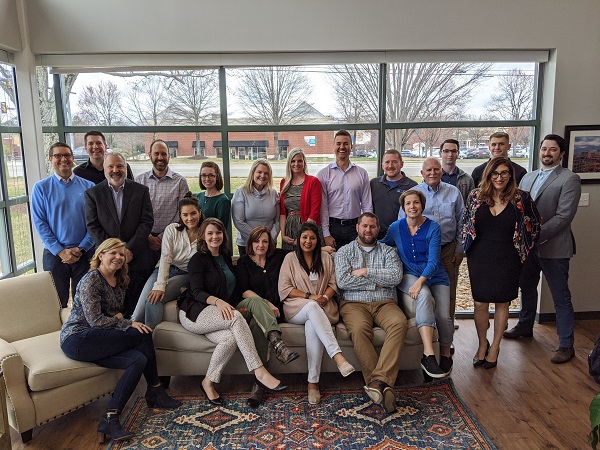 A residential real estate team backed by an online brokerage has found a brick-and-mortar home in western Henrico, less than a mile from where a new player in the market is planting its own flag near Short Pump.

Mission Realty, led by Clayton Gits, has set up shop in the former Truliant Federal Credit Union branch building at 3701 Cox Road, on the corner beside the Henrico County fire station on Westerre Parkway.

Gits, an agent with eXp Realty who formed his team while he was with Keller Williams, purchased the 3,600-square-foot building in early January for $1.5 million. The latest county assessment valued the 1.5-acre property at $2.32 million. 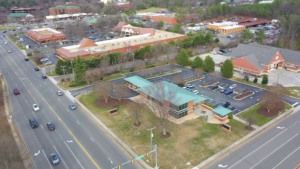 The building is on the corner of Cox Road and Westerre Parkway, across Broad Street from Innsbrook. (Mission Realty)

Truliant had operated there since 2001, when it purchased the site for $1.13 million and built the building, county property records show. The branch closed last year.

Gits, 45, said he’d been looking for a new office for a year, having previously leased space in the Glen Forest office complex off Forest Avenue. He worked with CBRE agent Matt Hamilton on the Cox Road purchase, which he said followed a higher offer on the property for a convenience store-style business that didn’t go through.

With that offer off the table, and another one rejected due to contract contingencies, Gits said they were able to stick to their lower offer and negotiate the purchase at $1.5 million. Commonwealth Commercial’s Jamie Galanti and Russell Wyatt represented Truliant in the negotiations.

Gits’ team of 20 agents and four support staffers moved into the building in late January, gutting the interior and redesigning the space with new paint, flooring and carpet, as well as a coffee bar. Gits said he’s planning a second phase that will replace the building’s five drive-up teller bays with a 2,500-square-foot addition. 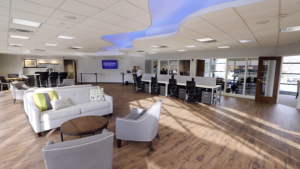 Gits, who has been selling homes locally since 2005, said he was able to afford the building after selling off just over half of his shares of eXp stock that he had acquired in his three years with the company. He was among the earliest local adopters of the online brokerage when it entered the Richmond market in 2017.

“The company has committed to sharing 50 percent of the revenue with its agents, and it’s a publicly traded company, so there are six ways for us to acquire stock as eXp Realty agents, in one of the fastest-growing real estate companies on the planet,” Gits said, adding that the company’s agent count – 1,800 when he started – recently surpassed 28,000 nationwide.

“In three years, I’ve been able to acquire roughly 40,000 shares of eXp Realty stock without purchasing a single share, just through selling houses,” he said. “I cashed in about 28,000 shares, and that offset the cost of this commercial acquisition.”

While eXp bills itself as a virtual brokerage, with traditional infrastructure costs cut out of its business model, Gits said his team wanted a physical location that they could make their own. 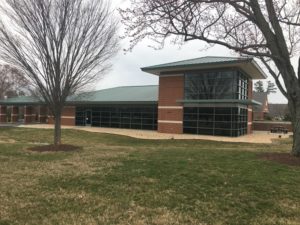 “We did it because we have a very large team,” he said of the office move. “It has a lot to do with us wanting to control the culture and scalability.”

Gits formed Mission Realty upon joining Keller Williams in 2006, when he was recruited from Long & Foster. He said the team closed 275 transactions last year, representing about $80 million in sales.

A newcomer opens up the street

The brokerage, which focuses on residential resales, totals 16 agents with five support staffers. Keeton started building the team while an agent with Henrico-based Neumann+Dunn Real Estate.

A Goochland County native, Keeton, 36, said he’s on a month-to-month lease and said the plan is to ultimately have their own office, having recently eyed a space in Innsbrook. But, he said, his agents say they’re happy with the coworking setup. 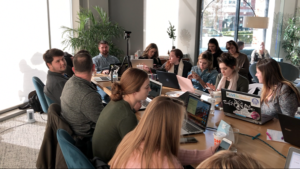 The Keeton & Co. team in their office earlier this year. (Keeton & Co.)

“It was initially supposed to be a short-term thing, but the agents are liking it,” Keeton said. “We’ve got a place in Innsbrook that we’re looking to potentially sign a lease, but I’m just holding off on it right now because of the feedback that I’m getting from this place.”

An agent in Richmond for nine years, Keeton said he started building his team about five years ago.

“With our model … we have six different compensation plans,” he said, describing their commission split structure as closer to 50-50 than the more-traditional 80-20. He said the firm also sets itself apart with an “a la carte” staff support service, in which agents can request staff assistance based on workload and pay for it as they need it.