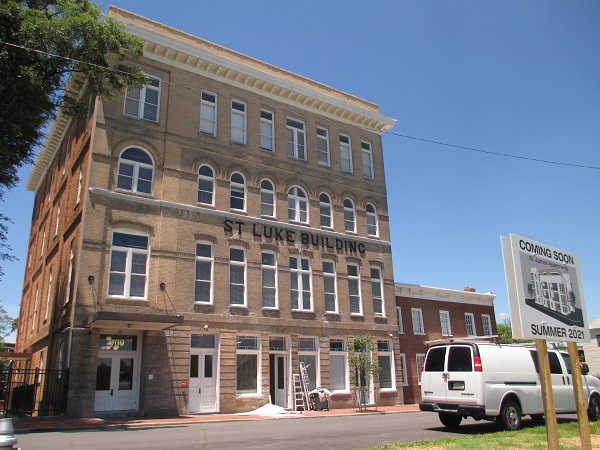 The renovated St. Luke Building on St. James Street. A sign across the street hints at more apartments to come. (Jonathan Spiers)

Ayers’ River City Ventures recently wrapped up a $4 million conversion of the St. Luke Building at 900 St. James St. into 14 one- and two-bedroom apartments. The century-old building, which housed the bank and other businesses of pioneering entrepreneur and activist Maggie Walker, includes a ground-floor commercial space that has been leased. 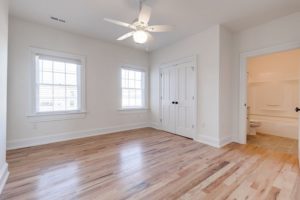 An interior of one of the units. (Courtesy Dodson Property Management)

The two-year-long project brings back to life the four-story, 1900s-era building that stands out among smaller structures and primarily vacant tracts on the north side of the interstate across from Jackson Ward. The building is adjacent to Gilpin Court and a block east of the former Baker School property, where another apartment conversion is underway.

While the St. Luke conversion went about $1 million over Ayers’ initial budget, he said the project allowed him to check off several firsts in his construction portfolio, which until then had focused on residential properties primarily in Church Hill.

“It feels great,” Ayers said of the project’s completion. “It’s my first elevator, my first sprinkler system and my first historic renovation.” 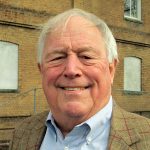 Dodson Property Management is leasing the units, which rent from $900 a month for a studio apartment to $1,850 for one of the two larger units in a two-story wing adjoining the main building.

Taking the commercial space is A New Legacy Family Services, a behavioral health agency based in Jackson Ward. Ayers said principals Korinn Carter and Sherron Shaw-Buchanan signed a five-year lease with a five-year option for the 3,700-square-foot space. 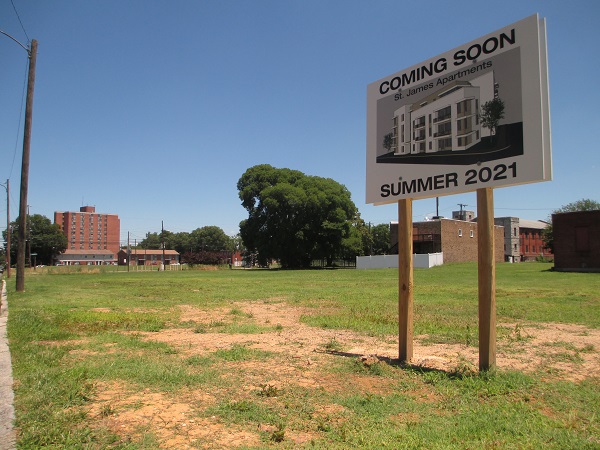 Ayers is planning the first of five new buildings that would ultimately house 120 apartments on the bulk of a nearby block. RRHA’s Fay Towers is visible in the background. (Jonathan Spiers)

With the rehab wrapped up and two of the apartments rented so far, Ayers is now turning his attention to his next project: a new 24-unit building on the other side of St. James Street that he’s planning to be the first of five similar structures totaling 120 market-rate apartments.

The first of those buildings, to be called St. James Apartments, is being modeled after 3900 Monument Ave., a modern-design apartment building developed by a group led by Yogi Singh, who turned around and sold it last year for $4.85 million.

Where that three-story Monument building totals 15 units, Ayers said his buildings will be four stories high with six apartments per floor: four two-bedroom units and two one-bedrooms. He’s enlisted the same architect, Johannas Design Group, to adapt its Monument design to his buildings. 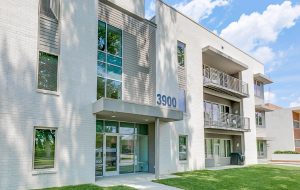 The St. James Apartments are being modeled after this building at 3900 Monument Ave. (BizSense file)

“I like it,” Ayers said of the building’s appearance. “It’s modern, but it’s not modern.”

St. James Apartments would rise across the street from the St. Luke Building, on part of a city block largely owned by the family of Margaret Stallings. Ayers is working with the family to develop nearly 5 acres that they own in that area. He said the five new buildings would fill out the family’s holdings in that block.

Ayers said he’s also planning to renovate an existing structure at 916 St. James St. into a 24-hour day care center. He said the Stallings-owned building at the corner of St. James and Charity streets once served as the first black orphanage in Virginia.

Ayers has an operator lined up for that property, Cindy Williams-Bey, who runs Heaven Sent Child Care off Laburnum Avenue. Ayers said he’s finalizing plans and hopes to have the property under lease in 30 days.

The commitments add momentum to a corridor that’s beginning a long-planned transformation.

Richmond Redevelopment & Housing Authority, which manages Gilpin Court, has been working with Community Preservation and Development Corp. on the nearby Baker School redevelopment – one in a trio of projects aimed at relocating residents of RRHA’s nearby Frederick A. Fay Towers, which are eyed for redevelopment. 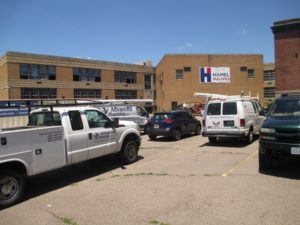 Work on the nearby Baker School rehab started earlier this year. (Jonathan Spiers)

Those projects include the recently completed Jackson Place development across the interstate from Gilpin, as well as the senior apartment conversion of the old Highland Park School. The Baker School property is likewise planned for senior apartments, totaling 50 units.

CPDC, now the real estate development arm of Maryland-based Enterprise Community Development after a merger in January, started work on the Baker School conversion in the first quarter of this year with contractor Hamel Builders.

The $16 million project, designed by Commonwealth Architects, is scheduled for completion in mid-2021.

Congratulations on the completion of this project. Good to see this building come back to life.

I am highly intrigued as to who will be paying $900 to love in Gilpin.

Perhaps this is a speculation renovation since rumors are Gilpin is slated be demolished within a decade.