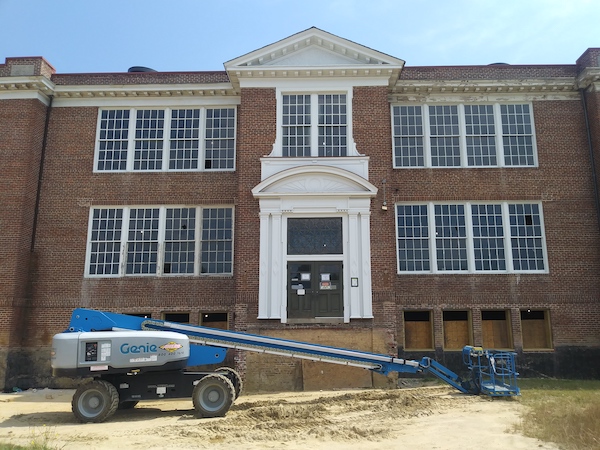 The Westhampton School will cost more than expected to renovate for office space, and those repairs contribute to a higher overall price tag for the development underway in the West End. (Photos by Jack Jacobs)

A local investment firm has signed a deal for a new office at the old Westhampton School, making it the first tenant to sign on in the midst of the property’s $73 million redevelopment.

Spider Management, an investment firm owned by the University of Richmond, leased the entire top floor of the three-story former school building at 5800 Patterson Ave. 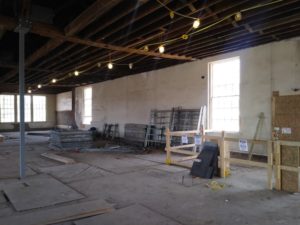 Spider Management is the first tenant to nab a spot at the Westhampton School development.

The building is undergoing a complete rehab at the hands of Thalhimer Realty Partners, which was tapped to oversee the redevelopment of the 6-acre, city-owned property in the West End. The project, upon completion, will consist of four buildings with a total of 250,000 square feet of apartments, retail and office space, plus a 134,000-square-foot parking garage.

“There was a desire for the folks at Spider Management to move closer to campus and their team loves the Westhampton neighborhood,” TRP principal Jason Guillot said.

Spider Management, which manages about $4.4 billion in assets for mainly endowments and charitable foundations, signed on for the 9,100-square-foot space late last year. The firm currently is located at 6802 Paragon Place in Henrico.

A University of Richmond spokeswoman didn’t respond to a request for comment. 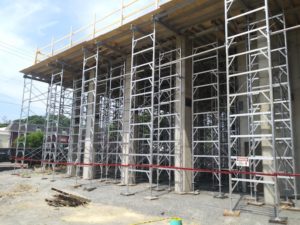 A new mixed-use building is being constructed next to the school at the Westhampton School development.

Spider Management is slated to move into the building in December, where it eventually will be joined by other office tenants. The new-construction building that’s currently underway next to the school will house a mix of uses, consisting of retail, office, multifamily and restaurant space. Additional apartments will be built into an L-shaped building attached to the development’s parking garage, Guillot said.

Crews also have been erecting the parking garage, which will hold 444 parking spaces. And a Bon Secours medical office building is also planned, though the future use of that building is in flux.

The renovation of the school building is expected to be completed in December, while the new building and apartment space attached to the parking structure are expected to wrap up next year.

A rendering of the Westhampton School development, which will feature residential, office and retail uses as well as a Bon Secours medical facility. (Courtesy Thalhimer Realty Partners)

The cost and size of the overall Westhampton School project have increased since its groundbreaking about a year ago.

The project cost has risen from a previous budget of $53 million to $73 million. In part, that’s because of unanticipated costs associated with renovations at the school, which was built in 1917.

Guillot said there were structural problems discovered after initial interior demolition and additional expenses tied to unsuitable soils on the property.

“The (school) building was significantly worse off than anyone expected,” Guillot said. “We needed a way to recoup that cost.” 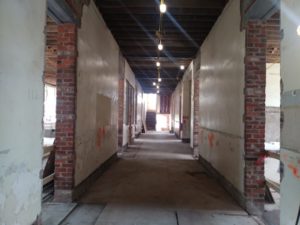 A view of ongoing renovation work inside the historic Westhampton School.

Guillot noted that financially speaking, it would have been a better move to demolish the school and build a new structure. However, the project called for a commitment to preserve the school. Historic preservation projects typically are subsidized by historic tax credits, but that wasn’t an option for the school because it isn’t in a designated historic district.

To offset the increased costs, the developers sought and received approval to add a fifth floor of leasable space to the design of the new-construction mixed-use building. The additional floor is allowed by right and the city planning department approved it earlier this year.

Guillot said the project still fits well within the goal of an agreement for the property struck by the city EDA and Bon Secours, which set a minimum capital investment threshold of $24 million.

Bon Secours signed a 60-year lease on the property in 2013 as part of a deal that brought the Washington Redskins’ training camp to Richmond. Bon Secours rents the property from the city for $5,000 per year and has two 20-year options to extend the lease.

TRP subleases from Bon Secours, declined to disclose the terms of the sublease. Bon Secours and Thalhimer share costs for site work associated with the construction project as well as the parking garage.

“Parking has been a hot-button issue for the neighborhood. We were able more than double the parking that the code requires,” he said.

Thalhimer is in talks with other tenants for the development but Guillot declined to name them. He said interest has come from downtown firms looking to move to a more accessible and walkable part of town. Particularly with the pandemic in play, firms seem interested in smaller offices away from large buildings with many other tenants.

“They are looking for scaled-down buildings that you can control as your own domain,” he said.

Guillot declined to share rental rates for the forthcoming 128 apartments included in the project, but added that he sees it as filling a void in the rental market in that part of the city.

The project contractor is Whiting-Turner. The architect is Glave & Holmes Architecture.

The pandemic has prompted Bon Secours to revisit some of the details of the development’s 55,000-square-foot medical building, which would sit on the northern side of the site closer to St. Mary’s Hospital.

The health system still plans to finance and build it, though it’s still working out the building’s use. Previous plans called for an outpatient pediatric facility in collaboration with VCU Health.

“At this juncture in the COVID-19 pandemic, Bon Secours continues to re-evaluate clinical programming, tenants and partners in many properties across the Richmond market, including in the Westhampton (medical office building),” Bon Secours spokeswoman Jenna Green said.

What the building will look like is expected to be announced in the coming months, she said.

So Bon Secours signed a 60-year lease on the property in 2013 as part of a deal that brought the Washington Redskins’ training camp to Richmond. Bon Secours rents the property from the city for $5,000 per year and has two 20-year options to extend the lease. And TRP subleases from Bon Secours who declined to disclose the terms of the sublease.
Question . . . What does Bon Secours, as a non profit, pay taxes on ? What tax benefit Is the city getting from this?