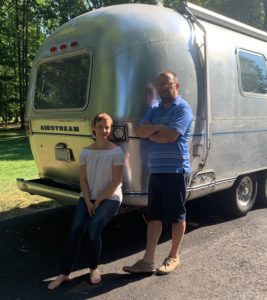 It took a global pandemic for Heather Grutzius and John White to do what they’ve been trying to do for years: restore their ’73 Airstream.

The local couple behind Scott’s Addition-based 510 Architects bought the vintage, aluminum-clad trailer years before COVID-19 caused them, like many others, to work from home, forsaking for a time their 10-person firm’s office in the HandCraft building.

But being homebound has meant they finally had the time to commit themselves to the project, which also has served as a welcome distraction.

“We realized that if we stayed home, we’d just work all the time, so we wanted an activity where we could get off-grid, and our boys love the outdoors and so do we,” White said.

“As business owners, we’re stressed – from the PPP stuff, to clients aren’t calling you as much – so it’s been a nice after-work distraction where we’re focusing on something that’s fun, versus sitting around being like, ‘What’s going to happen tomorrow?’” he said. “It wasn’t a great time, but we’re hoping to bring something good out of it.”

Experienced metalworkers and woodworkers from their days running 510 Fabricators, a sister company they operated for a time in tandem with their architecture firm, the couple purchased the trailer with the game plan of eventually renovating it. But running two businesses, and raising two boys, made finding time to work on the project a challenge, Grutzius said.

“We were working on it just on the weekends. We’d have to go pick it up from its storage, bring it home, have it in the street for two days, bring it back. It was nearly impossible to get done,” she said.

By White’s count, the couple has put more or less 650 hours and $15,000 into the hobby so far. Work up to this point has focused on the interior, which they said is about 90 percent complete. They also worked with local truck repair shop Ashby’s Inc./Crenshaw Corp. on frame repair and axel replacements, and picked up recycled countertops from local firm EcoSupply. 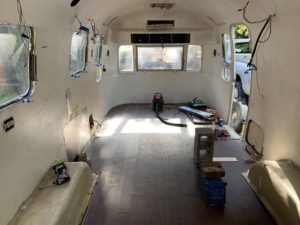 The interior of the trailer prior to the renovation.

“It would’ve cost a fortune to have this thing done by somebody else,” White said, noting savings from handling labor themselves, as well as from help they’ve received along the way from people they know and some they didn’t.

Posting their progress on social media, White said, “We had a whole outpouring of people from the community helping us out. Suppliers helped us out with different materials, and we had people on Facebook who were like, ‘Oh, I used to be an auto mechanic; I’ll come over and help you.’” 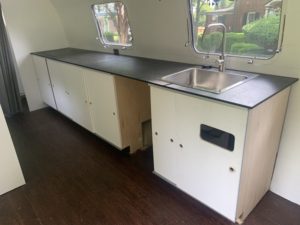 The couple designed and made custom cabinetry for the trailer.

Laughing, he added, “People with sailboats who are like, ‘I totally understand how the plumbing works, so send me a picture and I can tell you how this works.’ It’s been like a jigsaw, but it’s been fun.”

Still to do is the exterior, which they’ve started with some body dent repair but will require a considerable amount more elbow grease, White said.

“Eventually we’re going to fully polish it, like a mirror polish, but they say it’s 250 hours to polish it, so we’re thinking that may be next summer,” he said.

Already usable when they bought it, for $5,000 – “We came in front of the Airstream craze,” Grutzius said, noting the trailers’ high demand and prices today – the family has taken a couple trips with it since the pandemic hit, and plan to continue to do so between now and next summer. Having a way to travel amid a pandemic without staying in a hotel was another perk of the project, White said.

“We have two boys, and they’re chomping at the bit,” he said. “They haven’t really been out of the house in four months, so they’ve been the ones really pushing, like, ‘When are we going to go camping?’”

‘This could have never happened if it wasn’t for COVID’ 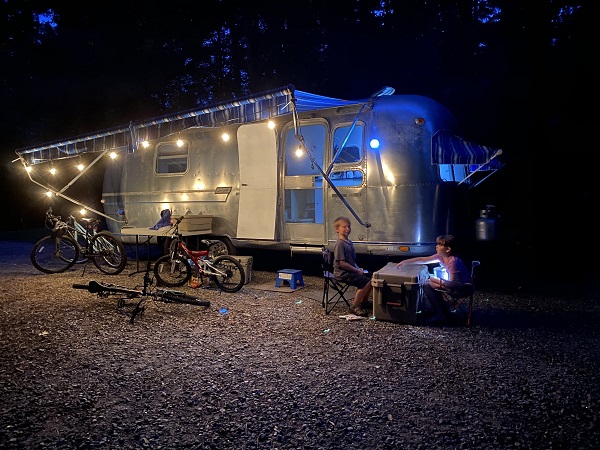 The renovation has been a welcomed distraction for the couple, and for their sons and their friends.

For the couple, both Hokies with master’s degrees from Virginia Tech’s School of Architecture + Design, the project also has provided a welcome opportunity to revisit their skills from their 510 Fabricators days.

“Honestly, this has really been the first time that we’ve actually done a project where we’ve both worked on it,” White said. “It’s been nice to actually build it for ourselves and not for clients. It sounds awful, but there were just no constraints of ‘How are we going to do this?’ We just did it.

“Obviously Heather and I work together all day, so it’s not like, ‘Hey, we’re more connected.’ But I think one of those things that’s been interesting to us is that this could have never happened if it wasn’t for COVID.”

If the pandemic goes the distance and they’re still in lockdown, White and Grutzius have more than one Airstream to keep them busy. They also own the shell of a ’79 model, which they picked up for $1,500 – likewise pre-“craze.”

Asked if a second renovation is in store, the couple laughed at the prospect.

“I don’t know,” White said. “After this one, we’re kind of like, ‘It’s expensive’ and blah-blah. But I don’t know. I’ve been already back there just looking at it saying, ‘Oh, what do we have to do here?’ So I think eventually.”

This is the latest installment – and the first amid COVID-19 – in our Downtime series, which focuses on business people’s pursuits outside the office. If you, a coworker or someone you know around town has a unique way of passing time off the clock and getting through the pandemic, submit suggestions to [email protected]. For previous installments of Downtime, click here.

Once again Bizsense, you failed us. Why can’t you post original sized images, I’m sure these were larger images presented to you for this story? If you can’t provide larger images for us to see, then don’t make them clickable, your users think they are going to see a larger image, one where we can actually see details.
This couple’s project ends up being a words-only thing, and to some extent, a waste of everyone’s time.

Great job! Timing is everything!