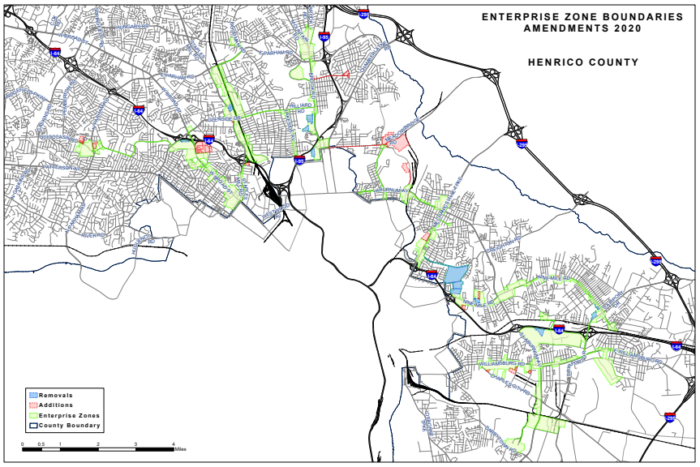 A map of the proposed enterprise zone changes in Henrico. (Henrico County)

More than 200 acres’ worth of property in Henrico soon could be eligible for local and state development incentives through a proposed adjustment to the county’s enterprise zone boundaries.

Henrico is looking to update properties included in its zone with an amendment that would add 219 acres. The amendment also would remove 273 acres identified as not being able to benefit from the program, such as publicly owned properties, land rezoned from business to residential use, and environmentally sensitive and protected areas.

The update is the first to involve removals of properties since Henrico launched its enterprise zone program two decades ago as a way to help stimulate economic development, and encourage business investment and revitalization in struggling commercial corridors.

Businesses located within the zone are eligible for 14 county incentives ranging from grants for building façade or landscaping improvements to partial tax exemption for property rehabs. Businesses in enterprise zones also can receive financial assistance from the state through the overarching Virginia Enterprise Zone Program.

Henrico’s update would add several notable properties, the largest of which includes 115 acres straddling Richmond-Henrico Turnpike between Richmond Raceway and Azalea Avenue, and nearly 70 acres comprising the Brookfield Commons business center on Broad Street, where reinvestment in some buildings has been seen in recent years. 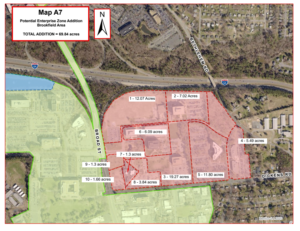 Other additions include the 11-acre Quioccasin Station Shopping Center near Regency, the nearby Ridge Shopping Center on 8 acres fronting Parham Road, the nearly 12-acre Chamberlayne Farms Shopping Center at Wilkinson and St. Charles roads, 15 acres in the industrial Klockner Drive area off Williamsburg Road, and 1.5 acres at the northeast corner of Brook and Wilkinson roads, where site work is underway on a retail development.

The additions reflect a mix of county revitalization and economic development priorities, as well as requests by businesses and property owners to be added to the zone, said David Sacks, Henrico’s community development manager.

While the boundaries are updated every so often, Sacks said this latest amendment is the first to involve removing properties from the zone, which he said is needed to stay below the state’s cap of 3,840 acres, or six square miles. 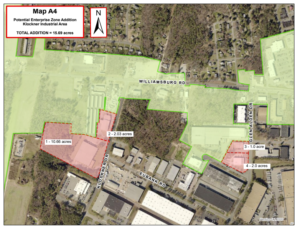 Proposed additions in the Klockner Drive area are shown in red. (Submitted)

“We review the zone boundaries pretty much annually, and we get requests from businesses to be added to the zone. Sometimes it’s as we identify land use changes,” Sacks said. “It’s routine. We just haven’t done the routine in a few years.”

While “zone” suggests a specific, individual area, Henrico’s enterprise zone, which technically is part of a shared zone with the City of Richmond, consists of property clusters across the county that appear disjointed but actually are all connected by various roads. The public right-of-way of those roads are considered part of the zone, while properties fronting those connectors are not included.

“It’s one zone, and it has to be contiguous,” Sacks said. “You’re allowed a certain number of discontiguous components to the zone. That’s why you have these arms kind of stretching out and grabbing areas.”

Proposed deletions from the zone include 187 acres in the Creighton Road area, 9 acres owned by Amtrak near its Staples Mill Road Station, and nearly 29 acres at Brook Run Shopping Center where Stanley Martin Homes is building new townhomes and condos. The shopping center would remain in the enterprise zone.

Ten acres rezoned for an expansion of Westminster Canterbury would be removed from the zone at the former Azalea Mall site, the rest of which would remain in the zone. Other deletions would include 13 acres near Highland Springs High School, 13 acres off Nine Mile Road near Dabbs House Road, and 21 acres’ worth of retention ponds at Reynolds Crossing and White Oak Village. 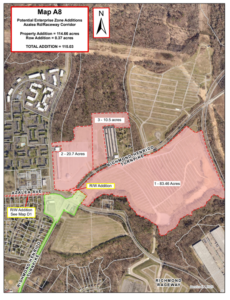 More than 100 acres in the Azalea/Richmond Raceway area are proposed to be added. (Submitted)

The amendment also would include revisions to three of the 14 county incentives that Sacks described as minor changes. He said the most substantial among them is to the off-site utilities improvement grant, to include broadband extensions among eligible improvements.

A public hearing on the changes is scheduled to be held at Henrico supervisors’ board meeting tonight. Because the zone – officially named the City of Richmond North/County of Henrico Enterprise Zone – is shared with the city, Richmond City Council would need to sign off on the changes, and is scheduled to do so next month. Sacks said Henrico’s amendment would not involve any property additions or deletions within city limits.

Very good for Henrico. I wonder if the City will take similar action. Several parcels in the City probably need to be removed from our maps for similar reasons.

Michael;
If a building is mixed use, such as aprtmetns upstair and retal on the ground floor, how are they impacted?