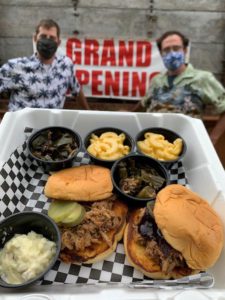 A new food touring company hopes to give local barbecue its due – and it has thought up a way to work social distancing into the mix.

RVA BBQ Tours launched this month, roaming around the Richmond area to introduce tour-goers to lesser-known purveyors of smoked meats.

Founders Greg Hofbauer and Ryan Martin established the startup to better elevate the region’s barbecue restaurants, a segment of the restaurant scene they thought has been left out of the hype that surrounds Richmond’s growing reputation as a culinary hub.

“As Richmond’s food scene got bigger and bigger, I noticed barbecue wasn’t represented as much,” Martin said.

With the coronavirus making their initial plan of bus tours unappetizing, the company created a caravan-style model in which tour participants provide their own motor transportation. The guided tours feature stops at several local restaurants, where tour members sample barbecue. Along the way, people on the tour listen to podcasts with the featured restaurants’ pit masters.

Tickets are $25 per person for people 11-17, and $59 for people 18 and up. Tours last about two or three hours based on their size, and include three restaurants.

The company declined to name the specific restaurants, partially because the eateries are subject to change and the experience of visiting lesser-known spots is part of the pitch to customers.

The concept had been in the works since last year, before the arrival of the coronavirus pandemic in March this year made bus tours a tough sell. That almost killed the idea until the company created the caravan concept.

“I almost shelved the business because we figured no one would want to be on a bus, and then the lightning bolt hit,” Hofbauer said.

The company’s first public tour took place July 18. Tours take place weekly on Saturdays, and Hofbauer said they’re interested in expanding the frequency if the demand is there. 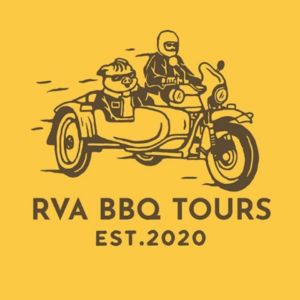 RVA BBQ Tours was founded to give people a taste of the Richmond area’s barbecue scene. (Courtesy RVA BBQ Tours)

Hofbauer said part of the draw for restaurants is that the tours take place 1-3:30 p.m., bringing in business during otherwise quieter hours. The company pays full price for the food tour-goers eat.

Martin and Hofbauer are the only employees, and hope to add one or two more tour guides by year-end. They’ve invested a little less than $5,000 in the company so far.

Martin works as a home inspector for Advance Home Inspections. He said since his day job entails a lot of driving around town, he learned about the region’s restaurants during lunch breaks. Martin spent 15 years working in the restaurant business before that.

Hofbauer owns the web design firm Hofbauer Consulting and also teaches at VCU. He previously served as director of innovation at ChamberRVA and ran the Small Business Development Center.

Elsewhere among barbecue restaurants, Hogshead Cafe moved into a larger space not far from its previous location on West Broad Street in Henrico County earlier this year. Jadean’s Smokin’ Six O, a mobile kitchen, made the jump into a brick-and-mortar restaurant in March.