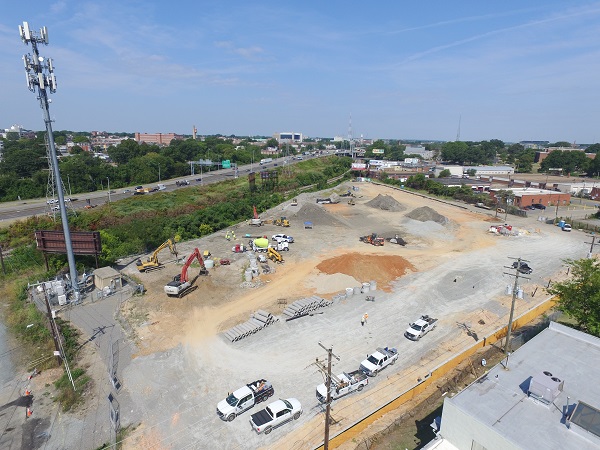 An aerial shot of the construction site beside Interstate 64-95. (Michael Schwartz) 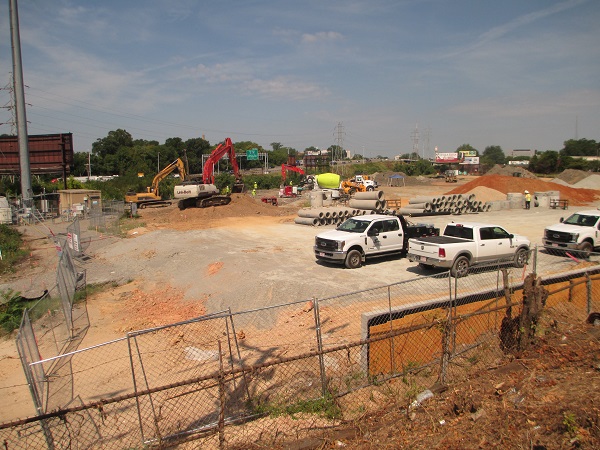 Months after a fire turned heads toward the site, prep work for new apartments near Virginia Union University is likewise getting the attention of drivers along the interstate.

Site work has started on The Foundry apartments, a 200-unit complex by Virginia Beach-based The Lawson Cos. near School Street and Brook Road, a couple blocks southeast of VUU.

The $40 million project will consist of four five-story buildings housing a mix of one-, two- and three-bedroom income-based apartments, with median monthly rents initially ranging from $850 to $1,200. Floor plans will range from 630 to 1,120 square feet on average, said Kris Knepper, director of development and acquisitions for Lawson.

Visible from Interstate 64-95, the 5.3-acre site beside the railroad tracks was previously home to a recycling facility, where a two-alarm fire broke out in February. Smoke from the fire, which occurred during afternoon rush hour, could be seen from across the city. 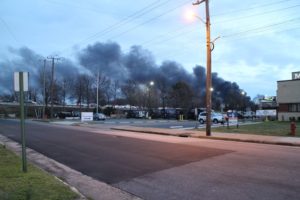 The fire in February could be seen from across the city. (Jonathan Spiers)

Knepper said the City of Richmond continues to investigate the fire.

“It was an unfortunate event and we are extremely grateful that nobody was injured,” he said.

Lawson closed on the property two months earlier, paying $2.7 million for the two parcels that make up the site at 1207 and 1207-A School St. The sale closed Dec. 20, city property records show. The latest city assessment valued the parcels at $983,000 combined.

The seller was 1207 School Street LLC, which purchased the site in 2008 for $1.7 million. The group had lined up Spy Rock Real Estate Group to develop the site, but that project fell through when it wasn’t approved for low-income tax credits.

Knepper said the Foundry is a 4 percent Low-Income Housing Tax Credit project, meaning Lawson can claim a tax credit equal to about 4 percent of the project’s cost of construction. Lawson worked with Virginia Housing (formerly VHDA) as its lender, with financing provided by Townebank.

“Our due diligence of the market indicated that income-based 4% LIHTC would best serve the community needs,” Knepper said in an email. “We will reserve the right to rent to tenants from a wide mix of income levels.”

The Foundry will consist of 36 one-bedroom units, 88 two-bedrooms and 76 three-bedrooms. Planned amenities include a clubhouse, pool, fitness center, grilling area, playground, business center, and indoor and outdoor bicycle storage. The complex also will include surface parking for residents and guests. 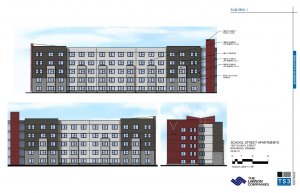 A rendering of The Foundry. (The Lawson Cos.)

Site work got underway this spring, and Knepper said Lawson is aiming to complete construction by the first quarter of 2022.

The project is Lawson’s second multifamily development in Richmond. The company also is developing a 96-unit low-income apartment development at 1100 German School Road in the Southside.

The Foundry adds to other multifamily projects planned in the VUU area.

A few blocks north across Brook Road, MVP Equities is signed on to develop a 224-unit complex between the post office and adjacent Spectrum apartments. Across the interstate along Lombardy Street, Stanley Martin Homes is looking to build 90 of its “two-over-two”-style condos across from Maggie L. Walker Governor’s School.

New developments have finally crossed I-95 again, bringing housing opportunities to a convenient locale. It’s wonderful to see that old junkyard and metal heap replaced. Lawson is a solid builder/low income housing operator and they are welcome in our city. their German School Road community is coming along nicely.

That area has a bunch of businesses that were forced out of Scotts Addition by astronomically increased rents, problems with parking, and disrespectful residential neighbors. Will that happen here again? I’m sure some of the business owners that are renting are looking at this with a tinge of uncertainty.