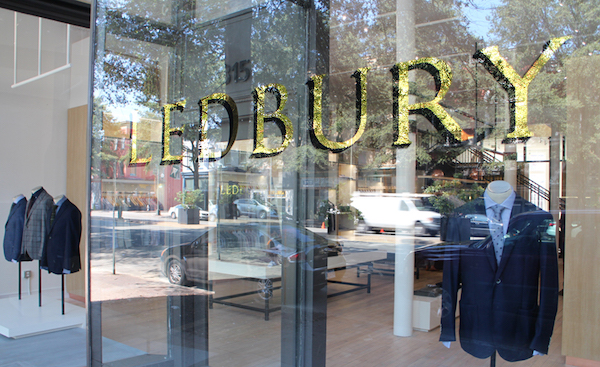 Ledbury recently reopened its store in downtown Richmond after being closed temporarily due to the coronavirus pandemic. BizSense file photo.

Unable to rely as heavily on sales of its signature button-down shirts, Richmond clothing company Ledbury’s COVID-era pivot to mask making has been fruitful.

The downtown-based firm has sold about 500,000 face masks since it began production in March, according to co-founder Paul Trible. The masks have been a big revenue driver and helped offset declines in its shirt sales. Dressy high-end workwear has had less demand because office workers have spent months working out of their homes.

“The last two weeks in March, first week of April were eerily quiet,” Trible said. “Very quickly, we realized there was a need for masks. It enabled us to keep our people busy and keep our factories open.” 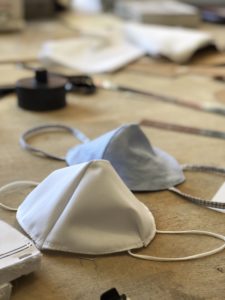 Ledbury turned its production facilities over to protective face masks and has found success supplying companies with masks just as it has seen sales for its mainstay dress shirts fall. Photo courtesy Ledbury.

Ledbury’s mask production began as a response to protective equipment shortages at VCU Health. It would later add other large clients such as Capital One, Altria and Atlantic Union Bank. The company made masks available to individual consumers in May, though large clients account for the majority of its mask business.

“Sadly, (masks) are going to be part of our wardrobes for the foreseeable future. (Businesses) wanted something elevated that had their branding on it,” Trible said.

The company’s retail mask offerings include a variety of patterns, colors and designs aimed at men, women and children. Packs of adult masks run $25 to $28, while individual masks sell for $12 to $18.

About 45 percent of Ledbury’s business is in dress shirt sales. Those sales dropped by half in March and April. Dress shirt sales are still down 30 percent from what they would be normally, Trible said.

The company also hopes mask sales will increase the brand’s visibility. Trible said that in the last six to eight weeks, women accounted for 60 percent of retail mask sales from the menswear company.

“It has been an interesting way to introduce our product to a whole new group of people,” he said. 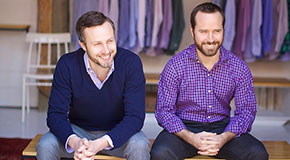 Though Ledbury initially pivoted fully to mask production, it has since returned to making clothing items as well. In addition to its staples, the company is weighing new casual items to keep pace with consumer trends driven by remote work.

“There very well could be a very nice Ledbury T-shirt in the future,” he said.

Ledbury’s brick-and-mortar locations have taken a beating this year.

The company permanently shuttered its store in New York City and its D.C. store is temporarily closed but expected to reopen in September.

The downtown Richmond store was damaged in the early days of local protests spurred by the death of George Floyd in Minneapolis but has since reopened. The company doesn’t plan to leave its location at 315 W Broad St.

“We got back up and running as soon as we got the glass (to fix the windows). We love this street and believe in it,” Trible said.

Trible said he’d like to see Ledbury return to New York City and that the company may revisit pre-pandemic plans for additional stores in other cities. He said the company is in a wait-and-see approach to gauge changes in consumer buying habits.

Ledbury’s resilience stands in contrast to the fortunes of other businesses in the retail clothing sector.
JCPenney declared bankruptcy and announced plans to close many stores, including its Regency Square location. Lord & Taylor is going out of business after it, too, declared bankruptcy.

Locally, Need Supply Co. has shuttered its Carytown store as it too goes out of business.