Owner Jim Hamilton (pictured) has worked in local restaurants such as Kuba Kuba as well as as a chef for touring musical acts. Courtesy of Sous Casa.

Jim Hamilton has had a burrito business on his mind for a while, but was too busy touring with Phish as the band’s chef to give it his full attention.

He can thank the pandemic for giving him the nudge to dive in.

Hamilton recently rolled out Sous Casa, a frozen burrito delivery company based in Richmond. The concept was an idea pitched by Hamilton’s business partner, but one he didn’t get around to until the coronavirus led to the end of his employment with Phish.

“When the pandemic hit and my job abruptly ended, it seemed to be the perfect opportunity to try it,” he said. 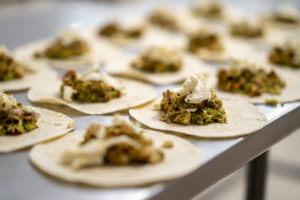 The company operates out of Hatch Kitchen RVA.

Sous Casa sells burritos, enchiladas and burrito bowls through its website. Items run $3 to $4. After customers place their orders, the company drops them off during its twice-a-week delivery runs. Each order requires a minimum of four items.

“It’s a stock up and put in your freezer kind of thing,” Hamilton said.

The company delivers orders itself with a truck outfitted with freezers. While there isn’t currently an on-demand delivery option, Hamilton said one might be introduced in the future.

Hamilton kicked off his culinary career in Richmond restaurants such as Kuba Kuba, Proper Pie Co., and Millie’s. More recently, he’s been on the road cooking for musical acts. Hamilton has cooked for Jay-Z, Beyonce, Jon Bon Jovi and other performers.

Hamilton and his business partner, who wishes to be anonymous, have invested around $60,000 in the venture, using money from their own pockets and family loans. Hamilton runs the company full-time and has two part-time employees.

Sous Casa, which launched in June, cooks its food in commercial kitchen space at Hatch Kitchen RVA, a food and beverage company incubator near Manchester.

“(Burritos are) fun and flexible,” Hamilton said. “You can put so much into them.”

Sous Casa plans to expand its delivery area beyond the Greater Richmond region into other cities.

“There are a lot of houses out there with a lot of people who like convenience,” Hamilton said. “The sky’s the limit on this.”

Sous Casa is one of several unconventional food concepts to launch during the pandemic:

Website? I can’t even find this company via Google.

1-Please put a web site for every company mentioned in every article, if they are a customer facing business.
2-This business makes me wonder, why isn’t there a food truck that would come to you and cook stuff for you on the spot? You place an order on an app, and the food truck pulls up and makes stuff for you. I would understand there would ahve to be minimum ordes and a small service area. But If Im going to get frozen food i’d jsut as soon do it wiht my regular shopping.
But i wish these guys luck.

My guess is that they are purely a “stock your freezer” service vs. the walk up food trucks…doing in that manner allows them to build suitable inventories and then twice weekly deliveries. I guess if you want food right away, you simply find a truck or restaurant. At least that’s my take…love the concept! I wonder if they’d deliver out to the far west end?

Chuck, we definitely deliver to the far west end. Of Richmond that is, so Short Pump or Glen Allen. Charlottesville is a little too far west (for now…).

Thanks for your thoughts Ed Christina! We always looked at the frozen food section of the grocery store and said “meh”. Frozen food should be a convenient savior on days when you really just don’t have it in you to cook something or wait for an overpriced delivery. Need a meal in 5 minutes? Pull it from your freezer and nuke it! Unfortunately frozen food purveyors have chosen scale over quality. They have built their entire business model on making food that will last months in a freezer so it can languish in a broken supply chain while it is… Read more »