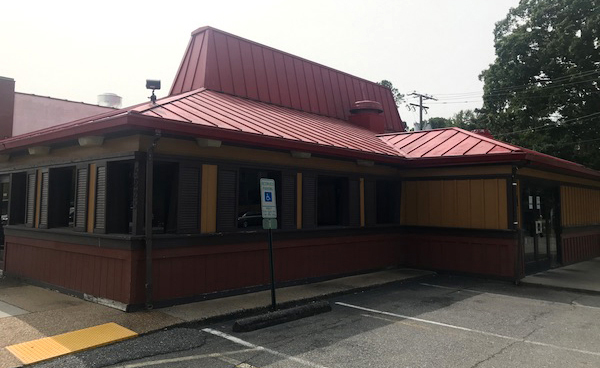 The Pizza Hut had operated on Patterson for decades. (Photos by Mike Platania)

A West End pizza joint has served its final slice after decades in business.

The buffet, takeout and delivery location was a mainstay of the Patterson and Libbie intersection dating back to the 1980s.

The closure is part of a mass shutdown of Pizza Hut locations nationally due to the bankruptcy of the brand’s largest franchisee, NPC International. It filed for bankruptcy protection last month and announced it would be closing about 300 restaurants, per a CNBC report. 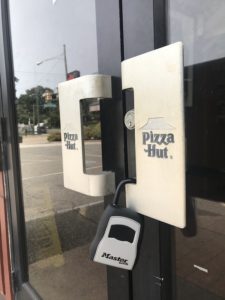 The location closed earlier this month.

NPC operated the Patterson location, which was among the 300 or so that closed. Pizza Hut operates more than 6,500 locations nationally, including more than 20 in the Richmond region — the majority of which are NPC-operated.

The Patterson property, including the 2,800-square-foot restaurant building complete with Pizza Hut’s signature peaked red roof, is owned by entities tied to the Robins and Dobbins families, who own a handful of other properties in the surrounding area, per city property records. It sits on a quarter of an acre and was most recently assessed by the city at $961,000.

While there are no plans on file with the city for the property, new development has been a trend at adjacent properties of late. Last year, a Hive salon location opened in a former medical office building across the street from the Pizza Hut.

Meanwhile the $73 million redevelopment of the Westhampton School continues to go vertical on the other side of Patterson. A bit further down, the Nichols brothers wrapped work last year on a new office building at 5701 Patterson Ave.

No loss. Maybe a decent pizzeria will move in there.

Pizza Hut was never good, but it used to be distinctly less awful. Now it boggles my mind that people order from there

The quality of the food (and your personal taste) is secondary here. It’s a business that people supported for almost four decades.