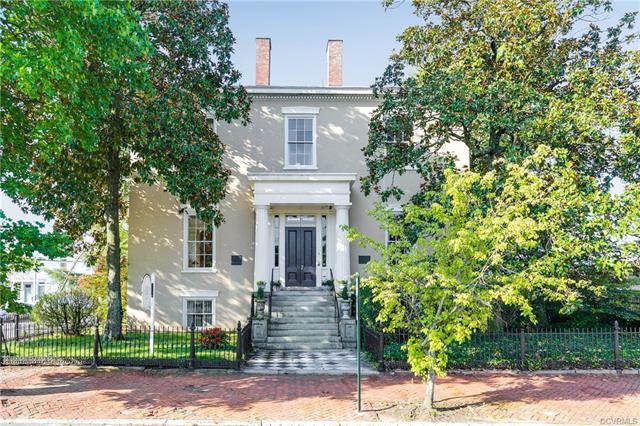 One of Richmond’s more notable 19th-century mansions that was home to one of the city’s most notable residents has been put up for sale for the first time in decades.

The nearly 180-year-old Ellen Glasgow House at 1 W. Main St., named for the Pulitzer Prize-winning novelist who resided and wrote there the majority of her life, hit the market Tuesday with a $3.5 million price tag.

Totaling 11,000 square feet of finished living space, the mansion, on the south side of the street a block east from The Jefferson Hotel, was listed by One South Realty Group’s Patrick Sullivan and Corby Hicks for sellers Jack and Tricia Pearsall. 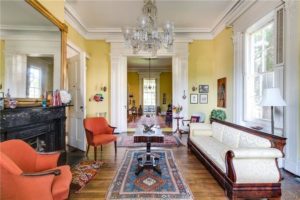 The couple, who have called the house home for 34 years, is in the process of moving across the river, where they have purchased a 2,600-square-foot townhome in the modern-style 7west complex at the foot of the Manchester Bridge.

The move will be a considerable change for the Pearsalls, who were drawn to the mansion’s architectural details and have kept it up over the years in keeping with its history. But it’s one that Jack, a retired attorney and preservationist, said was necessary when he realized he might not be able to maintain the house into his 80s.

“We still love it, but the time has come,” Jack said.

Of their new digs in Manchester, which he described as the best view in Richmond they could find, he added: “It’s one-third the size and totally different in style. We’ve always liked modern. It’s really midcentury modern, almost.”

Totaling six bedrooms and 5½ bathrooms on a quarter-acre corner lot, the Ellen Glasgow House – also called the Branch-Glasgow House in reference to its original owner – previously served as offices for what’s now Preservation Virginia and, later, Pearsall’s law firm, which purchased it from the nonprofit in 1983 for $250,000. 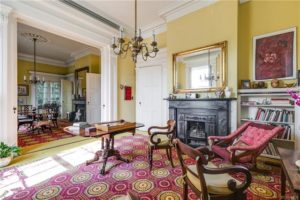 When that version of the law firm split in ’86, the Pearsalls bought it for $400,000 and made it their residence, moving from Church Hill. Jack’s firm with his late father, Pearsall & Pearsall, remained based in the house’s English basement until Jack retired and ended the business at the close of last year.

Other businesses were born out of the house over the years, including Glavé Newman Architects, now Glavé & Holmes, which started out of its second-floor sunporch, according to a business bio.

Reflecting that history of residential and commercial uses, the house is being marketed as a residential listing as well as a commercial opportunity, as the property’s zoning allows both by right. The property was among those rezoned to the city’s TOD-1 “transit-oriented nodal district” as part of an overhaul of zoning districts in Monroe Ward last year. 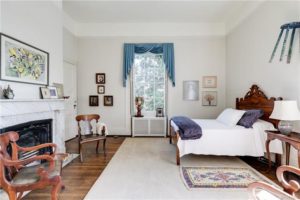 The upstairs bedrooms have 13-foot ceilings.

While protective covenants restrict what can be done with the main house, which is listed on state and national historic registries, a rear annex addition isn’t included in those covenants, meaning that portion of the property could be altered or remodeled, One South’s Sullivan said.

The listing also includes an adjoining parking lot, at 5 and 7 W. Main St., that Pearsall also owns and could be developed. Sullivan said the inclusion of the lot, which adds two-tenths of an acre, factored into the total asking price, which he said was determined based on comparable homes that have sold up and down the coast.

In Richmond, Sullivan said, such comps were hard to come by for a house he described as without peer for its preservation and continual use since it was built. The latest city assessment valued the three parcels that make up the listing at just over $1.82 million.

“It’s like a livable, breathing monument. It’s unlike anything else that I’ve seen,” Sullivan said. “We have lots of other great, historic properties and we have other large mansions, but most of those have seen extensive remodeling over the years or they’ve fallen into disrepair and been restored. To have something that has stayed consistently in the shape it’s in (is a rarity).” 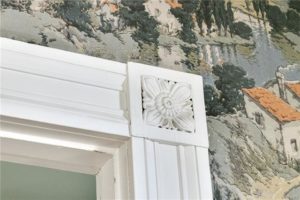 Century-old wallpaper that Glasgow installed remains on display in her writing room.

Among original features still intact are a mirror in the front parlor that Sullivan said came from James Madison’s Montpelier estate, as well as a gas chandelier that was never converted to electric. Such items are likewise protected by the covenants, and Sullivan said other items and furniture could also convey with the house, as the Pearsalls cannot fit it all in their new home.

Century-old wallpaper that Glasgow installed in her writing room remains on display, and the house as a whole was described in Richmond preservationist Mary Wingfield Scott’s “Houses of Old Richmond” as “in the most perfect condition of any of the remaining Greek Revival mansions.”

Built in 1841 for tobacco manufacturer David Branch, the house was later owned by Richmond industrialist Isaac Davenport before Glasgow’s father purchased it when she was 13, according to its state registry description. 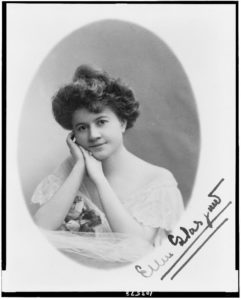 Glasgow would live there until her death in 1945, writing all but one of her novels there depicting Southern American life, including her Pulitzer-winning final novel, “In This Our Life.”

Glasgow’s brother donated the home to the Virginia Historical Society, and in 1947, it was purchased by the Association for the Preservation of Virginia Antiquities, now called Preservation Virginia. The nonprofit held programs there and leased out portions of the home to various tenants, including the Junior League of Richmond, the Richmond School Board and, in 1982, Pearsall’s law firm.

Jack said the firm’s lease had an option to buy after a year, which it exercised. He acquired the two parking lot parcels in 2002, property records show.

Sullivan said he came to list the property for the Pearsalls after meeting Jack through their respective real estate dealings over the years. Sullivan was involved in marketing 7west, which is adjacent to land the Pearsalls owned that Eagle Construction of VA is now developing as another townhome complex. 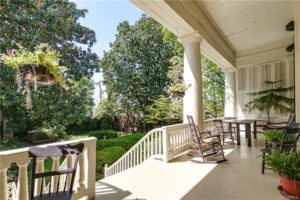 Jack also is working with Eagle in a joint venture to develop more townhomes at 1 E. Main St., a surface parking lot across Foushee Street from the Glasgow House. Such infill development and reuse of existing buildings have changed the character of the area over the years, said Jack, who acknowledged more neighbors than when he and Tricia moved in.

Tricia, a writer and former chairwoman for the Hand Workshop, now the Visual Arts Center of Richmond, said owning the house has connected them to the community over the years, hosting gatherings, fundraisers and even some chamber music concerts.

“We have been privileged to be stewards of the house now for 35 years, and it’s been fun being emissaries of Ellen Glasgow and Isaac Davenport,” Tricia said. 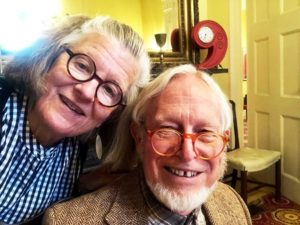 While they’re sad to say goodbye to their home of over three decades, Tricia said she’ll be happy to turn over stewardship of the house, which Jack said they hope will remain a residence.

“We would love to see it continue as a home,” Jack said, “but the zoning permits either residential or commercial by right, and it’s possible that somebody would want it for offices again.”

Asked what they’ve enjoyed most about the house, Jack said, “It’s all the architectural details and the wavy emblem windows, the space. You just get wonderful perspectives all over the place.

“My son wrote a poem when he was 10 or 12, when we moved in: ‘The Glasgow House, so huge; five-and-a-half bathrooms, two of which work’ – which pretty much summed it up,” he said with a chuckle.