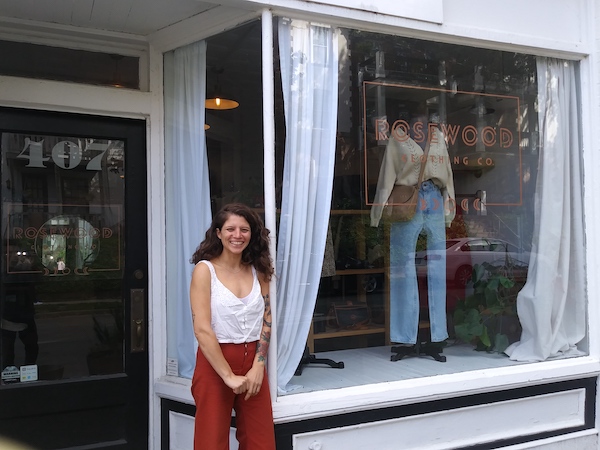 After close to six years in a Jackson Ward space, Rosewood Clothing Co. owner Ashley Carruthers has moved her shop into the Museum District. (Photo by Jack Jacobs)

The shop, which sells a combination of vintage and new women’s clothing, as well as accessories and home goods, opened earlier this month at 407 Cleveland St. in the Museum District, a few miles west in the city from its original home at 16 W. Broad St.

A combination of economic fallout from the coronavirus pandemic and lingering parking issues along Broad delivered a one-two punch that store owner Ashley Carruthers said led her to seek a smaller and more accessible space elsewhere in town.

“I didn’t want to leave, but this move was a decision made to survive,” she said.

Carruthers said her customers had difficulty finding places to park near the store after the GRTC Pulse bus line reshuffled the streetscape. The effort to build a new transit route wrapped up in 2018, and much of the parking along Broad Street was lost in the course of the project that started construction in 2016.

“At first it was fine, but then (business) just dwindled,” she said.

Then came the pandemic. After temporarily closing the Broad Street storefront in line with public health guidelines in March, Carruthers reopened in mid-June but came to realize the revenue wasn’t there to be able to continue to operate in the space.

Though Rosewood’s previous location was in Richmond’s epicenter of early police brutality protests in response to the death of George Floyd by Minneapolis police in May, Carruthers said that wasn’t a deciding factor in the decision to relocate.

The new space, at about 600 square feet, is smaller than the 900-square-foot shop she left behind on Broad Street. Carruthers is subleasing her new space from a salon called Amoura that shares the same building.

Rosewood has shifted its hours to a reduced schedule and has also been doing by-appointment shopping as some customers are more comfortable with that format. The store also has an e-commerce presence.

“We’re trying to find that balance between in-store and online,” Carruthers said, adding that foot traffic has been steadier in the new location.

Oh wait, you mean the Pulse didn’t bring you business?! Obviously, I kid. City leadership continues to fail us. Parking has been a significant undiscussed unaddressed issue since the beginning build out phase of the Pulse. But let City leaders present their bias data to tell us how well their project has gone. Keep in mind not a single parking space, much less a parking lot, was crrated for commuters using Pulse. It makes zero sense. We see time and time again a hit to parking availability and then wonder why businesses won’t come, or stay. It’s happening on North… Read more »

It doesn’t have to be either/or. We have the Pulse, but now we need more parking. I’ve always thought that was one area of economic development that the city was in a better position to address than the private sector. For example, if Shockoe Bottom had a parking deck near 18th and Main, it would allow the businesses in that area to flourish in ways they simply can’t on their own. The same is true for other areas of the city. Responsibly-run decks (like the one at Grace and 2nd) can pay for themselves over time. They just need someone… Read more »

Ridership on buses has been falling nationwide for years. So what does Richmond, Virginia, do? Expand bus service. Go figure.

So the solution is?

I hope that was a joke. The Tide in Norfolk cost 10 million a year to operate and 320 million to build. Roughly 45 million per mile to build. It was built over a mile or two of main roads but the majority was threw right of ways and across less populated areas. That was also 10 years ago. I can’t fathom what it would cost to build right down the middle of Broad, I can guess with inflation and the impact on traffic, etc. close to $1 Billion and it would all have to be elevated as there are… Read more »

The Pulse was designed with intention of upgrading to light-rail, so all they theoretically need to do is add the tracks to the existing path and buy the stock. Given that, I do not understand why they did not keep all of Broad median running like typical LRT rather than crossing lanes at both end like they have now.

Unlike the Tide run in Norfolk, Richmond benefits from a denser, centralized core and cooperation from the surrounding county. If the Tide could at least continue to the Beachfront then it would like be a lot more successful.

To be honest I don’t even like driving that section of Broad any longer with the lanes swerving back and forth, very uneven roads, lanes abruptly ending and confused drivers and pedestrians very close to the right hand lanes and medians. I certainly don’t want to try and park among all that confusion.

Don’t forget the arses that know it is a travel lane but still stop, park, get out and run into a store as you are stuck behind them!

Cities like Richmond abandoned their trolleys in favor of buses for the flexibility they offered. The PULSE is simply a bus without the convenience of a bus. I have lived in Richmond since the 80s and I used to ride the bus almost every day. Most of the routes I rode were eliminated. I use my car now. I realize many people profess an absolute religious adoration for the PULSE and that I will be soundly condemned for this blasphemous opinion.

In a functioning urban commercial neighborhood, patrons to shops like these would walk or take transit to shop. The idea that this stretch of Broad Street should cater to out-of-area patrons that refuse to use other options already available to them is silly. Furthermore, downtown Richmond has a surplus of parking, much of it completely free. The real issue here are patrons, coddled by suburban design, expect to pull their cars up right in front of a business and pay not a dime. In an economically vibrant and functioning city core, sales are primarily driven by those arriving by foot… Read more »

Allan, the unsubstantiated claim that Richmond has an abundance of parking is absolutely incorrect. Just ask the many of us who live in the City. We’d suggest a different reality.

Ashley, you not wanting to pay for parking and there not being any parking are two very different things.