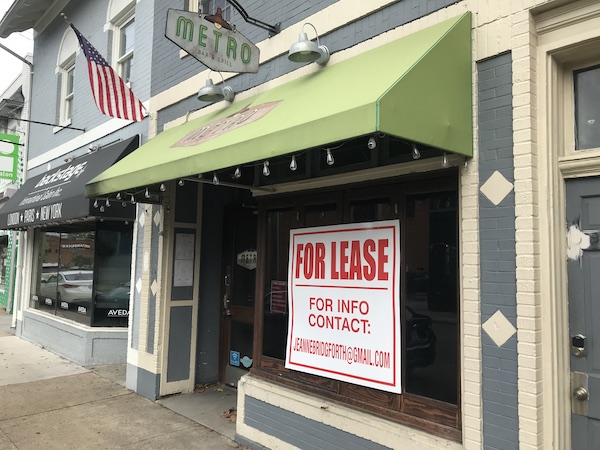 The Krusty Krab Seafood Grill and Bar plans to open at 301 N. Robinson St. in January. The restaurant took over the space Metro Bar & Grill occupied until it shuttered due to the coronavirus pandemic. (BizSense file)

The vacated Metro Bar & Grill storefront in the Fan won’t stay empty for long, as a mother-daughter team plans to open a new restaurant there early next year.

The Krusty Krab Seafood Grill and Bar will serve a wide-ranging menu of seafood, hamburgers, sandwiches and pizza at 301 N. Robinson St. in the Fan. It’s slated to launch in January.

The 4,000-square-foot space had been occupied by Metro Bar & Grill from 1999 until earlier this year, when it closed permanently in response to the disruptions of the coronavirus pandemic, which has upended the restaurant industry and other sectors due to stay-at-home orders and state-imposed operational restrictions.

The Krusty Krab will be the first for Yenci Lemus and her mother, though the co-owners have prior experience working in the industry.

“My mom always wanted to have a restaurant, and we’re trying to make that dream come true,” Lemus said early this week.

Lemus said her mother picked out the restaurant’s name because she liked the sound of it. Lemus said the name wasn’t a reference to the burger joint by the same name seen in the Nickelodeon cartoon Spongebob SquarePants and therefore wouldn’t be themed as such.

Krusty Krab is one of several eateries that have recently staked out Fan spaces emptied by the pandemic. Blanchard’s Coffee Roasting Co. has taken over a former Lamplighter Coffee Roasters cafe 26 N. Morris St., while takeout Mexican restaurant TBT El Gallo plans to open at 2118 W. Cary St., which was formerly home to The Naked Onion.

I hope they got legal permission from Viacom…a man in Houston tried to open one and got sued. He lost even though the restaurant had no theme or reference to the sponge sponge bob show.

I wonder what name they will eventually use? I can’t imagine this one won’t get blocked. Which is fine by me, it sounds like something from short pump