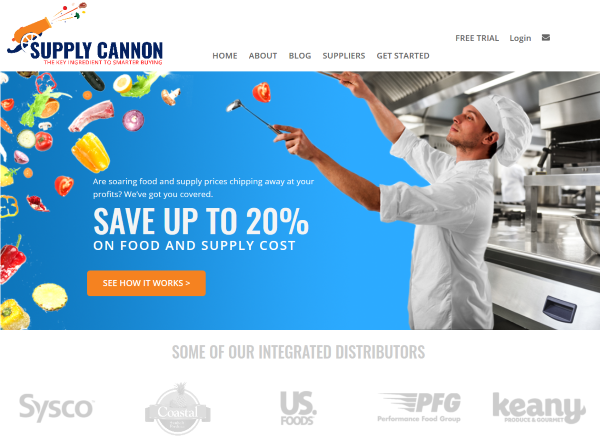 Supply Cannon is a one-stop shop procurement platform for businesses in the hospitality sector. The program consolidates vendors so users can compare prices and buy food and supplies in one place. (Courtesy of Supply Cannon)

With a local restaurant owner among its founding foursome, a new tech startup wants to take some of the legwork out of keeping a commercial kitchen stocked.

Supply Cannon launched last month as a web-based service that aggregates products and prices for items needed by restaurants. The site allows restaurants to shop around and order in one place in a manner similar to travel website Kayak, which helps travelers compare the costs of flights from multiple sites.

Supply Cannon’s website officially went live in early October with a focus on Richmond, Northern Virginia and Charlottesville. The platform gathers together the offerings of vendors that range from large companies like Sysco and Goochland-based Performance Food Group as well as smaller local and regional suppliers. There are six suppliers with listings on the site as of early November and the company aims to add additional local vendors.

The platform collects a little under a percentage point of the order cost at checkout to generate revenue.

“We want to make sure the barrier to entry is low,” co-founder Alp Akbasli said.

Supply Cannon doesn’t have a direct vendor relationship with suppliers. Rather, it provides a webpage that allows users to access suppliers’ catalogs on its platform with the same credentials users would use to order directly from those vendors.

“Essentially Supply Cannon is operating as an agent on behalf of the restaurant,” co-founder Lancen Lachance said.

The concept was born of co-founder Steve Rogge’s personal experience as a restaurateur. Rogge owns barbecue restaurant Flyin’ Pig and Wood & Iron Gameday. He said that to buy food and other supplies was a challenge as the search took him to multiple websites and sources.

“We faced situations where we either couldn’t source it or we could get it cheaper (somewhere else),” he said. “It was time consuming … it could take up to two to four hours to fulfill orders.”

Rogge shared his challenge with Akbasli, a friend he made while at the University of Virginia. The pair then brought on their college friends Lachance and Willow Noonan to fill out its roster of founders.

Supply Cannon is one of several food sector startups to pop up in Richmond in recent months. Foodē is launching an app-based delivery service. ELYA, which sells quick-serve meals out of vending machines, launched in October.