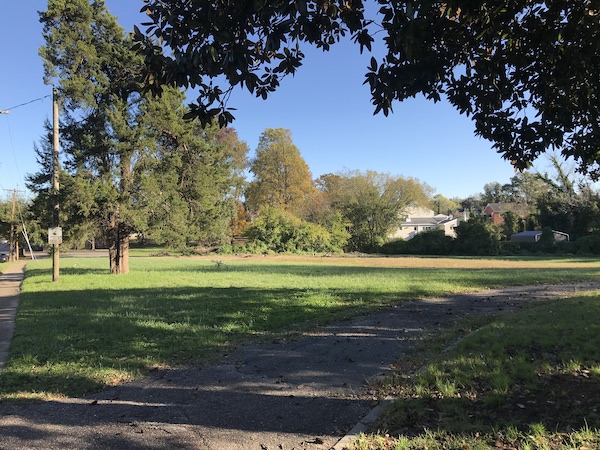 A development with 56 affordable housing units is being planned for this vacant site in Northside. (Mike Platania photo)

A local nonprofit is looking to add to the city’s stock of income-based housing.

Commonwealth Catholic Charities is planning a development with 56 apartments on about 3.25 acres at 1031 and 1101 Fourqurean Lane near Highland Park. The project would be entirely income-based units.

The Catholic Diocese of Richmond and its parish in the area, St. Elizabeth’s Catholic Church, are partners with CCC on the project.

“(Affordable housing) is a need for the city overall, but our market studies indicate that it’s a huge need and there’s a huge demand for it in Northside and in the Highland Park area,” Yenson said. “We don’t anticipate having any trouble leasing up these units.”

CCC is applying for a special-use permit to authorize more density on the site. Yenson said the project has been in the works for about a year and a half, and that past proposals included up to 100 units.

The units would be spread across 14 buildings and each apartment would range from one to three bedrooms. The site will feature on-site parking, and Yenson said they’re exploring adding connective trails to the project.

“We’d like to have a trail that connects through the south end of this site to Overby-Sheppard (Elementary School) and to the Cannon Creek Greenway,” Yenson said.

Over the last few years, the Catholic Diocese of Richmond purchased the vacant land the project would rise on for a total of $368,000.

St. Elizabeth’s Rev. Jim Arsenault said the parish operated a school on the plot for decades until the 1970s. In the years since, the land changed hands a few times and the school was ultimately demolished.

“It was acquired back by the Catholic Diocese in Richmond to secure our growth because the parish and Highland Park are growing. We just thought this would be a good fit,” Arsenault said.

The project is being designed by Baskervill with Timmons Group as its engineer. Yenson said they’re still in discussions with general contractors.

If the special-use permit is approved, Yenson said they’re aiming for an early 2022 groundbreaking which would precede a 12- to 18-month buildout. The matter is not yet listed on a Richmond Planning Commission agenda.

Yenson said being the lead developer on a project is a new concept for CCC.

“We’ve partnered in a couple other Low-Income Housing Tax Credit deals where we’ve been a nonprofit partner in Newport News, Richmond, Staunton and Suffolk. But this is the first one that we are leading on,” he said.

Earlier this year, the nonprofit sold its building at 517 W. Grace St. to Daily Planet Health Services for $1.7 million.

Praise be to God! No, . . . really. I mean that in all sincerity. While private enterprise is best at supplying goods and services (to rich and poor alike), it is charities (ahem —not government) who should step in and help where there is a perceived unmet need.

I’ll never get this LIHTC articles that we read on here after the current awards are out (2020). The 2021 app schedule it out and City projects have about a 3% chance of getting funded any given year looking at all the projects that apply statewide. If you look at projects in the City/MSA group you have less than 25% chance of getting approved in your first year. In fact in 2020, only two complexes in the city got funded and the elderly Church Hill North second phase project under RRHA’s application was denied. It is not like a credit… Read more »

I wonder if anybody has really thought what this project will be like to live in. This area is a food desert. There aren’t areas for children to play or for families to enjoy outdoor time together. Why such a big effort to pack in more low income housing. Why not make a park or an exercise area. Make something so children don’t have to hang out on street corners. Give them a chance to experience nature.