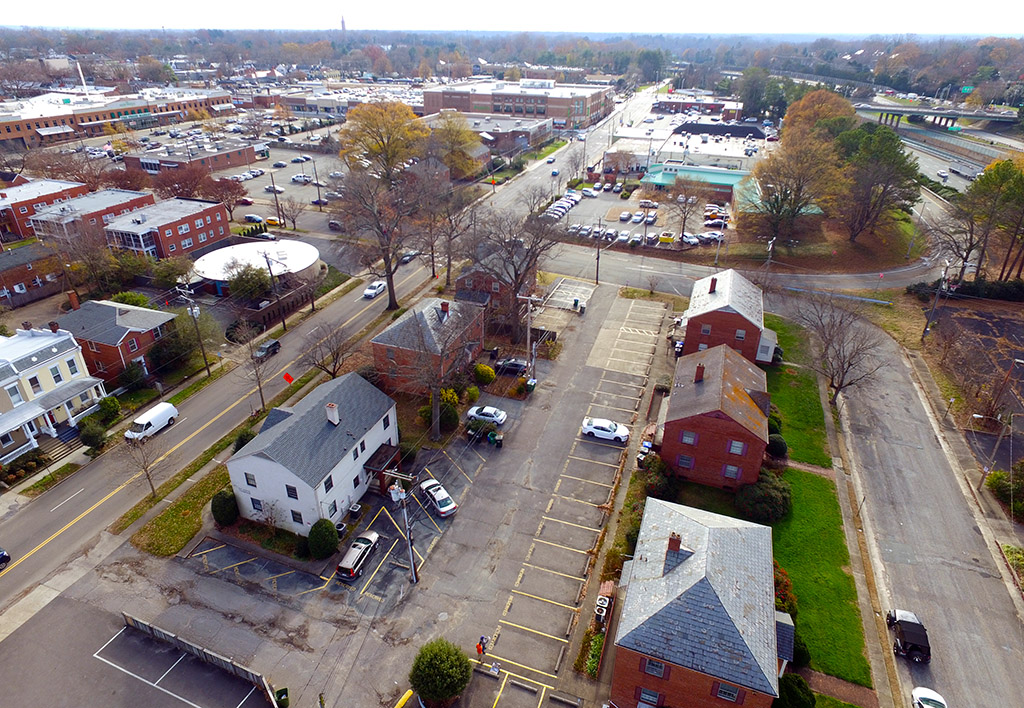 The site encompasses the six buildings in the foreground. The new Carytown Exchange development is visible in the distance. (Michael Schwartz photo)

It looks like the western edge of Carytown won’t be getting a new hotel after all.

The 0.77-acre site at the intersection of North Thompson Street and Floyd Avenue that had been planned for a Residence Inn is now in the hands of a new owner.

However KM’s plans for the new hotel look to be off the table following the land’s sale. The Carytown project is no longer listed on KM’s website, and company President Mayur Patel did not respond to calls and emails seeking comment.

Woodfin Vice President Kevin Walsh said Woodfin is part of the property’s new ownership group. He added there are other unnamed partners in Doswell Ventures LLC but that KM Hotels is not among them.

Walsh said the group doesn’t have any immediate plans for the site, which is currently home to six residential and office buildings.

“We saw it as opportunistic,” Walsh said. “It’s a well-located piece of property and a lot of positive things happening in the immediate neighborhood. We don’t have any specific plans for redeveloping the property.”

KM Hotels had previously had the land under contract but never closed on it, city property records show. The seller in the deal was BMS Partners LLC, an entity tied to W. Bruce and Margaret Swartz.

Woodfin’s headquarters are about a mile north at 1823 N. Hamilton St. in Scott’s Addition, where it’s been for five years.

The Thompson Street property is a block north of Carytown Exchange, the new development where Publix opened a few days ago. No other retail tenants have been announced for the new development, though the Virginia ABC is considering putting a store there.

Love the new use of drone shots in your stories Bizsense – thank you.

That’s unfortunate. I’ve believed for years that the one thing missing from Carytown was a hotel.