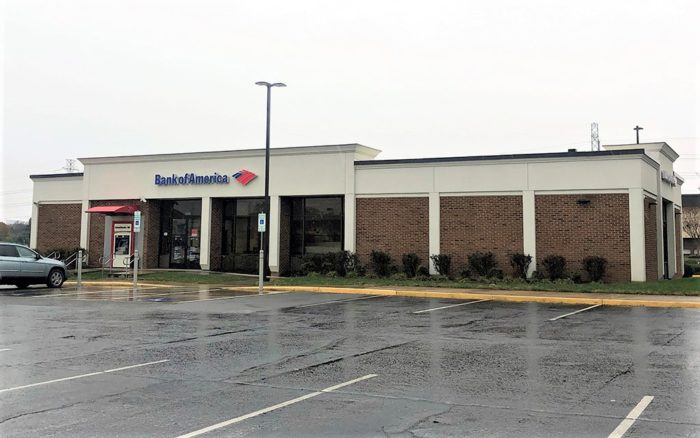 The former Bank of America branch at Stonebridge has been leased by Chase Bank. (BizSense file)

A Southside property is trading one national bank for another.

Chase Bank, in the latest step in its ongoing Richmond expansion, is taking over a shuttered Bank of America branch at 7203 Midlothian Turnpike. The standalone building is in the Kroger-anchored Stonebridge development, where the Cloverleaf Mall once stood.

A Chase spokeswoman said the bank has signed a lease for the 4,000-square-foot property and expects to open in August.

The Midlothian Turnpike property has sat vacant for about a year after Bank of America vacated in favor of other locations nearby.

The Stonebridge spot will be the eighth Richmond-area branch either open for business or in the works for Chase. Its first two opened last year in Short Pump and on Staples Mill Road in Henrico. Others are in the works in the former Peking Pavilion building in Shockoe Slip, on the site of the former Extra Billy’s BBQ restaurant next to Willow Lawn, in the under-construction Carytown Exchange development, as well as spots in Mechanicsville and Midlothian.

The banking giant is well on its way to achieving its goal of adding up to 20 new branches in Central Virginia over time, 10 of which it aims to open by the end of 2022.