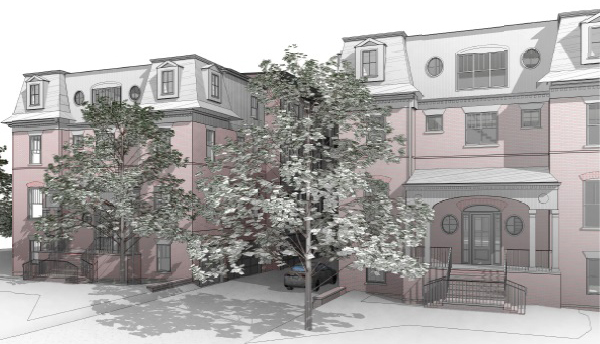 A trend toward bigger buildings and increasing density along the stretch of Libbie Avenue between Grove and Patterson avenues received further endorsement from city officials this week.

After deferring a vote at its meeting last month, The Richmond Planning Commission on Monday backed Eagle Construction of VA’s plan to replace two houses at 509 and 511 Libbie Ave. with a 14-unit townhome development.

The project, which was recommended for approval with one dissenting vote, now goes to the City Council for a deciding vote Feb. 8.

Commissioner Jack Thompson, who cast the lone “no” vote, reiterated concerns of some neighbors that the development’s density and height would overwhelm the corridor and adjacent properties. While the townhomes would be within the established height of the four-story Tiber condo building across the street, opponents maintained that the recently adopted Richmond 300 plan calls for restricting heights along the corridor to three stories.

After reviewing the plan since last month’s meeting, city planner Matthew Ebinger said the three-story restriction is intended for by-right development allowable through zoning, not through a special-use permit — as requested in this case — that is meant to allow for exceptions to zoning.

Ebinger also said staff was supportive of the project because the proposed townhomes would be closer to 3½ stories than four, putting them about three feet higher than a nearby office building on the same side of the street. Thompson took issue with that justification.

“I think to try to justify the height with topography is a stretch,” Thompson said. “This corridor was specifically called out with a maximum of three stories, and I’m having a hard time getting past that. If you stand on the north side of where this building is going to be and look at it, it’s four stories tall.” 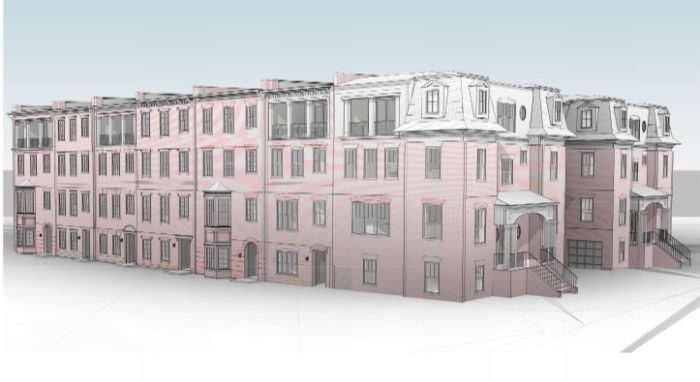 An elevation rendering of the two rows of townhomes Eagle Construction is planning on Libbie Avenue. (BizSense file)

Other commissioners and supporters who spoke in a public hearing stressed that height should not be a deciding factor for the project, arguing that the difference from what’s currently allowable by-right is six feet.

“I think we have a little bit missed the focus,” said Burt Pinnoch, a principal with local architecture firm Baskervill. “The discussion between three and four stories is really, as you noted, about six feet of conversation today. It’s not about the quality of development that the applicant is proposing.”

The project, which would fill about three-fourths of an acre between the two existing home lots, received eight letters of support, including from Pinnoch and from developer Jason Guillot, whose projects in the area include Westhampton on Grove and the Westhampton School site redevelopment at Libbie and Patterson. Tiber developer John George also spoke in support during the hearing.

The project received 18 letters of opposition, including from the Westhampton Citizens Association, which maintained the stance it took at January’s meeting.

“We remain opposed to the SUP,” WCA’s Joe Andrews said in Monday’s hearing, describing the buildings as “too tall” based on the Richmond 300 plan.

“We also feel the setbacks for the two buildings are too close to the front line of the property,” Andrews said, “and the buildings will overpower the streetscape and neighboring single-family dwellings and will detract from the village-like feel of area.” 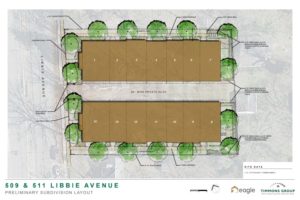 A site plan of the Libbie project. Click to enlarge.

As proposed, the townhomes would range between 3,000 and 4,500 square feet in size, and each unit would have between three and five bedrooms, at least 3½ bathrooms and a two- or three-car garage accessed by the shared alley. The two rows of seven townhomes would be oriented perpendicularly to Libbie, with one end of each row fronting the street and the private alley between them with access from Libbie.

Lory Markham, a consultant working with Eagle, argued that the application process for the project started two years ago, before Richmond 300’s recommendations were fully formed. Regardless, she maintained that the project abides by the plan’s vision for that stretch of Libbie Avenue, which is designated as community mixed-use, a land use designation that calls for building heights of two to six stories.

“If there is going to be a rezoning of the entire area, it makes sense to limit the height to three stories,” Markham said, reiterating that the case is a special-use request. “If you’re considering a specific case on a case-by-case basis, there might be extenuating circumstances that allow for additional height.”

“I think that the writing’s on the wall when we look at this district. We’re not going to be looking at a row of single-family little houses that were on a suburban market with 50-foot-wide lots. We’re going to be looking at the strong development that we’ve been talking about,” he said. “I feel that this project is relatively small relative to what can be happening down the blocks.”

Added Commissioner Vik Murthy, referring to Eagle: “We have a strong, well-versed developer who has the ability to execute on this project. They’ve got a number of SUPs on projects similar to this throughout the city, and we’re excited to have them here in the city.

“This will not be like the Tiber where it hopefully will not sit for a number of years before it gets finished. I think they’ll do a great project and continue to hopefully look at other projects in that corridor.”

The vote carried with support from Andreas Addison, who was in his first meeting as the commission’s City Council representative. Addison’s First Voter District includes the Westhampton area.

Those elevations are very strong on eye appeal. The Libbie-Grove area reminds me a lot of happened in McLean in the 80’s where small houses on large lots were redeveloped into large houses on small lots. The location is just too good to ignore for a public that is starved for in-fill housing opportunities as opposed to urban sprawl. I think we’re going to see a lot more of it, as well as many more parking lots developed closer in the City.

I promise you no one living in that area is clamoring for this 4 story behemoth. But that’s what happens – developers develop regardless of the costs & toll on the neighborhood, the structure and integrity of the existing neighborhood be damned. I wonder where this array of my fellow residents are that are so “starved” for this project. I personally am starved for the City to come up with a plan and …. yes, actually follow it. Instead its the same ole same ole – have a master plan and then grant so many exceptions (under the cute title… Read more »

Per the article the difference is 6 feet in height from what the developer wants and what’s in the master plan. I don’t get what the fuss is about because I’m so accustomed to seeing people on here clamoring for property owners rights. This property owner has gone through the process and we all know there will always be exceptions. This is a high quality development that will add to the tax base. I see no reason to oppose it.

I guess that would be the same Lori Markham who used to work for City Planning. How convenient. City Planning will do what it wants…community input is just for show. Objecting is a waste of time for the cash cow that is the near West End.

It’s about time the city pays less attention to the Not In My Back Yard (NIMBY) crowd, because this is a great development. It looks nice and it’ll add to the tax base.

Chill out, Justin Reynolds. These humongous homes, which will probably have prices starting at at least 850K, will be built. They’ll cause the assessments and real estate taxes to skyrocket, ultimately leading to the demise of the practical, efficient, well-built starter homes which currently dominate the neighborhood.

I’m all for density, but it doesn’t look nice. Design wise it kind of sucks. Wish developers would just replicate the better apartment buildings in the fan/museum district – doesn’t seem like any contemporary designs are ever particularly attractive