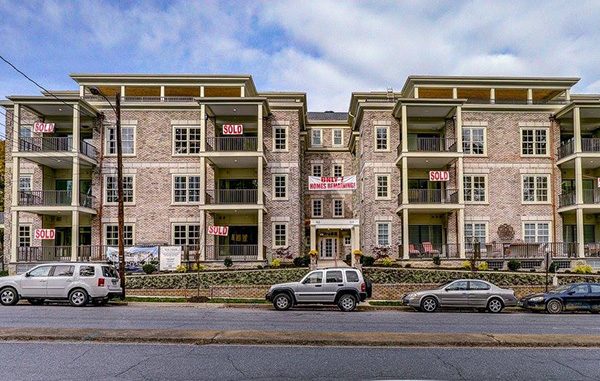 The high-end development at Libbie and Guthrie avenues has finished construction on its primary condo building. (Courtesy Page George)

Nearly five years after the project broke ground, the once-troubled Tiber condo development in Westhampton is entering 2018 with its main building completed and most of its units sold.

The high-end development at Libbie and Guthrie avenues has finished construction on its primary condo building and is slated to start its final unit this month – a detached 2,800-square-foot cottage.

The project has also sold more than half of its15 units, with 11 of the 14 condos closed or under contract. Those include the two penthouse units, both of which were under contract as of late December with listing prices at or just below $1.5 million.

The sales have been a long time coming for John George, who enlisted local businessman David Posner to help him finish the development after a falling out with his original partners on the project.

“It has been tremendously gratifying to complete the Tiber project as I originally envisioned it,” George said in an email. “…I am proud to have brought such a quality residential project to Westhampton.”

Construction on the project got underway in early 2013 but came to a standstill after infighting led to a string of lawsuits between George and former partners Scott Boyers and Berkeley and Jennifer Fergusson. All but one of the units at the time had deposits from prospective buyers, who were later refunded their deposits after George and Posner bought the loan on the property and took ownership of the site in a bankruptcy sale in 2016.

Posner, who has said he personally financed the bulk of the project since stepping in, described the completion as a point of pride for him and George, who served as general contractor and designed the project with Scott Stephens of SMS Architects.

“It’s exciting to get to this point, with of course the history of this project,” Posner said.

“The people that live in that area have got to be happy. The people that have bought units and are moving in, we know are happy. And as an investor-developer, of course I’m happy that we were able to complete the project and hopefully we’ll make some money.”

Posner declined to say how much he has put into The Tiber or disclose its overall cost. He acknowledged the duration of the project added to its cost but said the bankruptcy proceedings had more financial effect.

“We’ve had a fair amount of interest in that,” Posner said of the cottage, which he said would get underway with insulation and drywall later this month. “I don’t want to say it wasn’t a priority, but finishing the (condo) building was the main priority.”

Each condo features a unique floor plan and finishes that are determined by buyers, Posner said.

While none of the original buyers are among those purchasing units this go-round, Posner noted the buyers’ demographics are more varied, with several younger buyers in the mix.

“At least two buyers are in their 30s, which is crazy compared to the original set of buyers,” Posner said. “The original set were older people, 60s and 70s, who were downsizing. We’re seeing now we’re going to have a reasonable number in their 50s and 60s.”

George’s wife, Page George, an agent with Engel & Volkers, is handling listings and sales of the units. She said interest in the units has been strong, and Posner said they anticipate selling the remaining three units within the next 90 days.

While lawsuits surrounding the project remain active, with Boyers and the Fergussons each seeking $10 million in damage awards and judgments against John George and Posner, the project’s completion marks an end to a five-year saga that Posner called unfortunate.

“Everybody will say the whole situation has been unfortunate, but we did what we said we were going to do,” Posner said. “We were able to get control of the project and finish it. It’s as beautiful as certainly what John George originally envisioned and what a lot of people in the area hoped it would be.”