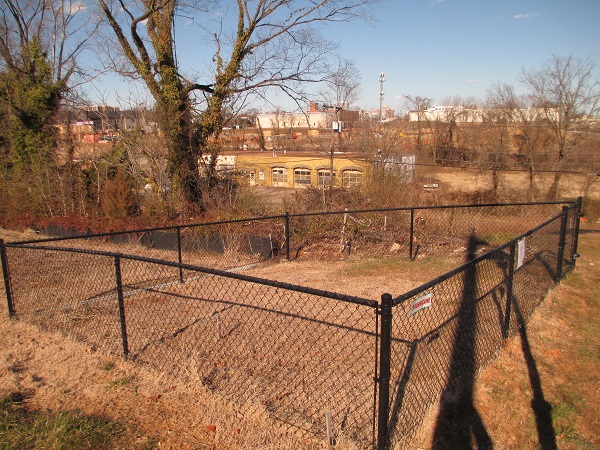 An existing burial site on the property has been fenced off as a cemetery for the recovered coffins. (Jonathan Spiers photos)

A townhome development in Richmond’s Swansboro area is picking back up after a grim discovery last summer stopped the project in its tracks.

Crews prepping the site of The Hollands development near Semmes and Cowardin avenues ran into an unexpected obstacle along a stretch of Perry Street: three small iron coffins dating to the mid-1850s, two of them with nameplates identifying children: one 7 years old, the other a month old.

Since the discovery in late August, an archaeological survey identified three more graves in the area, adding to two others that were already known to be on the property and remain buried in a fenced-off cemetery on the site.

The city is applying for a permit from the state to exhume the three graves and relocate them to the cemetery site, as was done with the three coffins and a fourth that was exhumed in the initial recovery in early September.

A notice posted last week asks anyone with a family or community relationship with the burials — specifically four surnames that may be associated with them — to contact the city and state with questions or concerns. Respondents also can request that a public hearing be held.

The four names that research indicates could be associated with the burials are Sumner, Keese, Cobbs and Hardgrove. The two nameplates on the coffins that were displaced and reburied identify the occupants as Bettie Munford Sumner, 1847 – May 13, 1854, and Amelia Word Sumner, May 11, 1854 – June 12, 1854.

“We’re letting people know that these were found and that they have been reburied. So, if anyone is concerned about their whereabouts, they know where to find them,” said Joanna Green, an archaeologist with the Virginia Department of Historic Resources’ Preservation Incentives Division.

“Unfortunately, in late August, a machine operator hit an iron coffin. The operator noticed immediately, stopped, immediately backed the machine off. They did everything right,” she said. 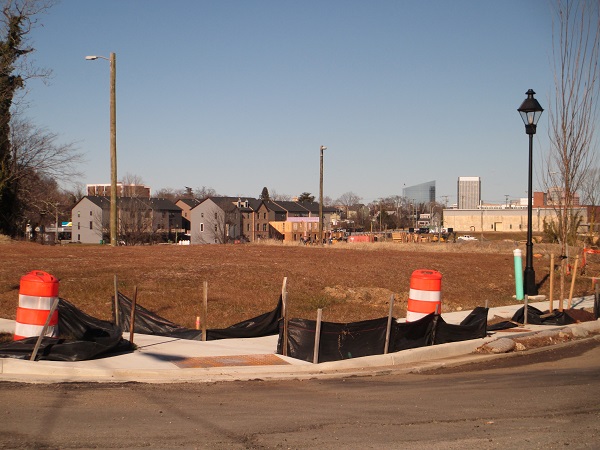 The development site at Perry and 24th streets. Townhomes at the nearby Belle Heights development are visible in the background.

While the coffins, being metal, were sealed airtight, Green said one was broken by the machine, requiring a speedy response to prevent decomposition. With the summer heat a factor, and with COVID-19 making refrigerated storage options scarce, Green said the decision was made to immediately rebury them.

“We understood that they were quite small, and no one wanted someone else’s children to stay in that condition any longer than necessary,” Green said.

“The city tried desperately to find refrigerated storage for them so that we could take a reasonable amount of time to determine how best to reinter them. But given the COVID pandemic, nobody was willing to offer storage space that they might need for other purposes. So, we had essentially about a 24-hour turnaround on the recovery process.”

Given that the coffins contained children, Green said the experience was difficult for all involved.

“It was heartbreaking,” she said. “It was really heartbreaking for the entire crew and the construction guys.”

Enviroscape’s Jim Aldous deferred comment to Dianna Bowser, CEO of SCDHA, who said the coffins were found underneath what’s now the 2200 block of Perry Street, which borders the development site along with McDonough Street between West 22nd and 24th streets.

Research by Kim Chen, a preservation planner with the city, found several subdivision plats showing a cemetery in the area.

The development site is two blocks south of Semmes Avenue, west of the Belle Heights development under construction closer to Cowardin Avenue. 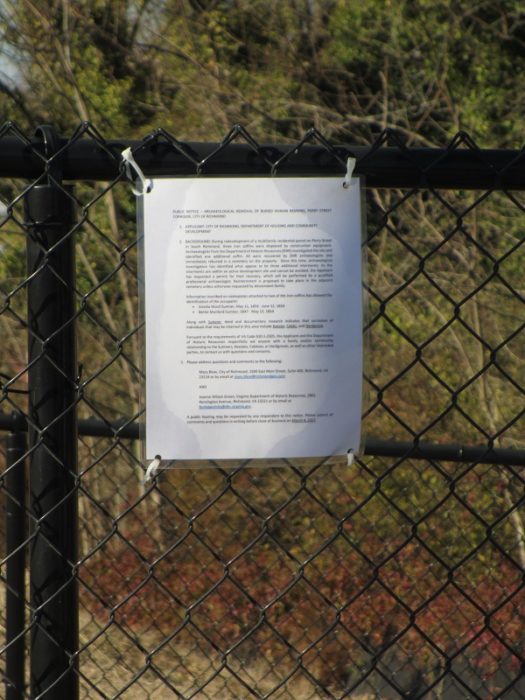 Notice of the city’s permit application to exhume bodies is posted at the cemetery site.

Because the coffins were in city-owned right-of-way, Bowser said the discovery stopped work in the street but didn’t significantly delay work on the development site.

“We had to immediately stop and contact the city to determine what they wanted to happen, so that’s what was done,” Bowser said. “We had to wait to see what do we do next, and we got the go-ahead to start the buildings on the site where we’re building the homes. We just can’t do any work in the actual street. The only thing we had left to do was to repave it.”

“They were very good and helped us through this process. They were really good in doing what they needed to do for the state and the archaeologist,” she said.

“When you see something like that … it’s history,” she said, “and we had to just stop.”

An archaeologist was brought in to determine if there were other graves in the area, leading to the three that are the subject of the permit. SCDHA enlisted Lyle Browning of Midlothian-based Browning & Associates, who has handled similar scenarios in which developments encounter grave sites.

While it’s clear that the recovered coffins contain children, Green said the identities of the deceased are not known, except for the two with the nameplates.

Those bear the same surname, indicating they might be siblings, but Green said it’s unclear whether all of the graves are of members of one or more families. She said their race or ethnicities also are unknown.

That the coffins are metal indicates that the buried were of families with the means to afford them, Green said.

“They were produced and used a fairly brief period of time. There was only a 20- to 25-year period where they were in relatively common use,” she said. “They were expensive. So for families to invest in that, they had to have reasonably solid economic footing to begin with.” 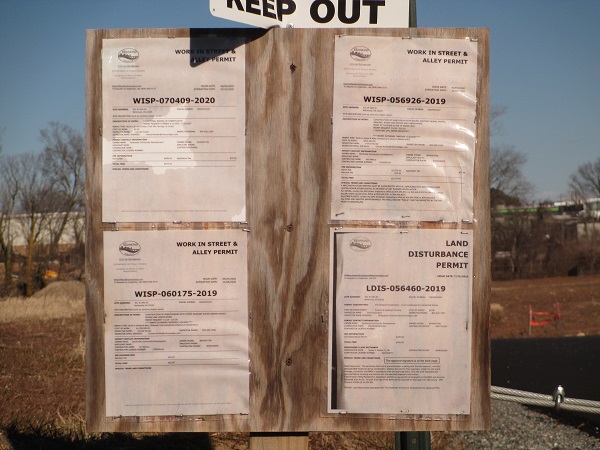 Land disturbance and work-in-street permits are also posted on the property.

While their airtight design would prevent spread of a contagious disease, she said iron coffins are not typically an indicator of a particular cause of death.

Green said the graves do not appear to have a correlation with any disease epidemics that occurred in Virginia, though she did note that the timeframe was during a period when Richmond was dealing with a bad cholera outbreak.

“That may or may not be relative to these particular individuals, but there were a lot of deaths right around that period of time,” she said. “And these being children, they would have been more vulnerable to disease.”

Anyone with comments or questions about the graves and the city’s permit application is asked to submit them in writing before close-of-business on March 8.

While there may be more graves in the area, Green said they are certain that all graves that would be affected by the development have been located.

“I think that we can be confident that all remains have been found within the development site,” she said. “There’s still some question as to whether or not there may be some underneath what is now Perry Street, but that’s a question for another time. At this point, the area that needs to be disturbed for the development has been thoroughly investigated.”

Meanwhile, SCDHA is moving forward with The Hollands, which will total 22 townhomes for households earning less than 80 percent of the area median income. 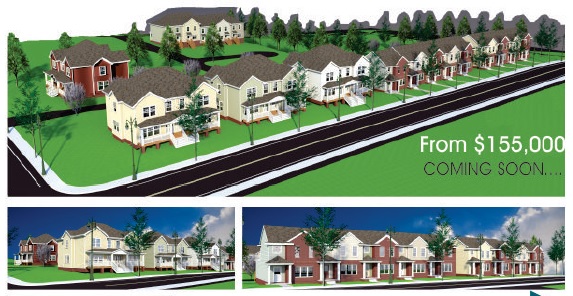 Images from a marketing flyer show The Hollands townhomes, which now will be priced starting at $185,000. (Courtesy of SCDHA)

Named for a family that Bowser said owned a farm on the land, the $6 million development will consist of two- and three-bedroom homes ranging from 1,300 to 1,500 square feet, with prices starting at $185,000.

Bowser said site work for the homes is completed, and construction on the first eight units could start this month. Glen Allen-based US 2 BG Contracting is building those units, while the rest of the homes will be bid out as the development progresses.

The homes are designed by Banerjee & Goff, an architecture and interior design firm in Midlothian. Midlothian-based Sekiv Solutions is the civil engineer on the project.

The project has been years in the making for SCDHA, which has been buying up and assembling the parcels that had previously housed an old apartment building and other blighted properties. Bowser said the area had become a haven for criminal activity when the city enlisted SCDHA for the project, which officially broke ground in May 2019.

“The city wanted us to look at areas that had been blighted and abandoned. A while back, it was an abandoned apartment building that was a haven for drug transactions. It was awful,” Bowser said.

“During the years we were able to acquire all the property that we needed. It took a whole lot of time,” she said. “The property needed so much infrastructure and site work, but we’re almost there.”

Credit goes to the machine operator for his quick action once he hit the unmarked graves. That dated aerial belies the changes that have rapidly converted that intersection into a major residential area. There are hundreds of residences–apartments and townhouses–that are not shown. The metal tobacco warehouses no longer exist. I enjoy giving windshield tours to my neighbors who haven’t seen the area south of the river in years. Their eyes pop out!

The builder could give the unmarked graves new stone monuments with the people’s names on them.

Betty Sumner appears in the 1850 federal census for Richmond. She was both deaf, and blind. Listed in the same household are family members named Keesee, and Cobb. Her mother’s name was Amelia, so it seems likely that the infant, Amelia, was Betty’s sister.

Yeah it shouldn’t be that difficult to figure this out and find their kin.