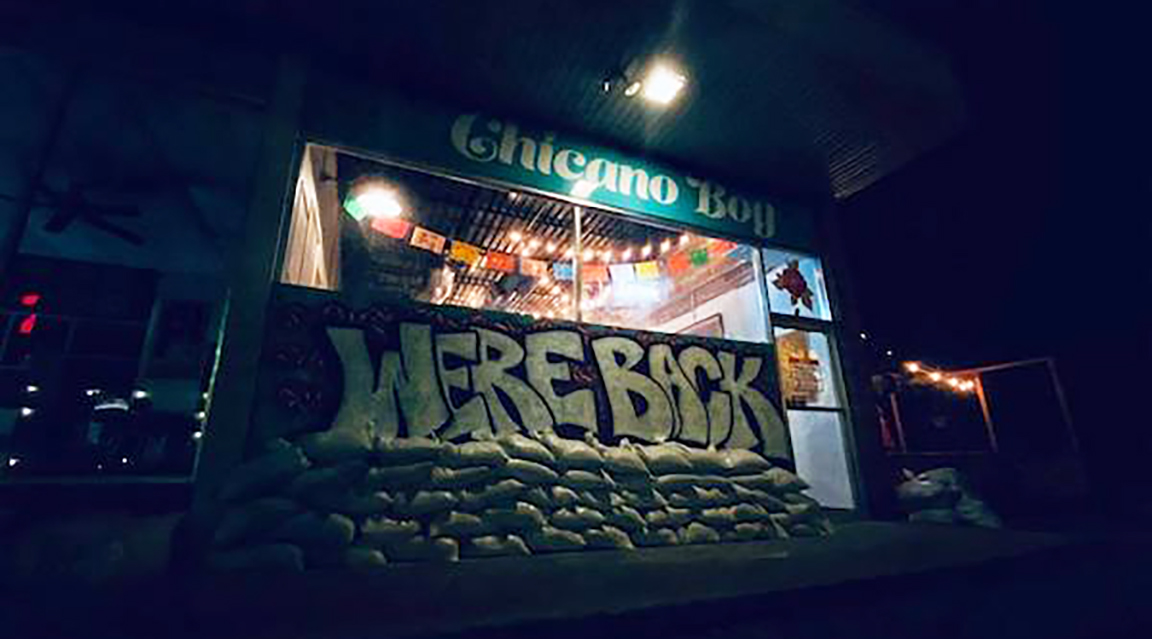 Equipped with sandbags out front and a “We’re Back” sign, Chicano Boy Taco reopened in Staunton after a flood last summer. (Courtesy of Justin Hershey)

On a rainy afternoon last August, Justin Hershey was getting ready to lay down for a nap at his place in downtown Staunton — a small city west of Charlottesville in the Shenandoah Valley.

He’d noticed the gutters outside his home were struggling to keep up with the rain coming down, so he called the staff at his nearby restaurant, Chicano Boy Taco, to check in. They said things were going fine. 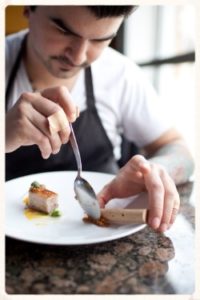 “Then five minutes later they called me again and were like, ‘OK, the water’s up to the door,’ ” Hershey said. “They called again later and said the water’s like three feet high and they were standing on chairs.”

He rushed down to the restaurant, which had been open since 2015. Minutes later, a van floated through the front of Chicano Boy. Water levels inside the restaurant eventually reached 4.5 feet.

“It turned into The f***ing Shining,” Hershey said. “A neighbor dropped a ladder through the roof and my general manager climbed out. The rest of my staff were all stuck in trees.”

In the months since, Hershey bounced back to reopen his restaurant in Staunton and is now bringing Chicano Boy Taco to the Richmond area.

Chicano Boy is a fast-casual concept, serving tacos, salads and California Mission-style burritos, nachos and salads. Its main dishes range from $10 to $11, and Hershey said the Midlothian location’s menu will mirror Staunton’s.

Originally from California, Hershey worked as a chef in Charlottesville’s food scene for over 10 years. It took a toll on him, and in 2014 he said he was starting to feel burnt out on the industry.

“For over a decade I helped other people make money and turn restaurants into successful ventures,” Hershey said.

One of those ventures was The Shack, a restaurant he helped chef Ian Boden open in Staunton. Within a week of being open, The Shack was discovered by an Esquire writer who heaped praise on the concept. In addition to the business boon, Hershey said the positivity reinvigorated his love for the food industry.

“That launched me back into having a positive viewpoint of the hospitality industry,” he said. “I was finally like ‘OK, I’ve gotta do this for myself.’ I had a handful of small, niche (restaurant concepts) in my head that I could execute in Staunton. Chicano Boy was one of them.”

He first opened a pizzeria in Staunton called Newtown Baking before doing a few pop-ups for Chicano Boy at a local brewery. The taco concept was well-received.

“I thought I was going to make some weekend money,” Hershey said. “It turned into me doing over $2,000 in a parking lot in three or four hours.”

Hershey opened a brick-and-mortar Chicano Boy and said the business has enjoyed double-digit growth every year since opening, even during the pandemic.

Two weeks after being flooded, Chicano Boy was back open for business. When insurance wouldn’t help cover the repair costs, Hershey leaned on donations from the local community and private donors to fix the restaurant, but said he had to eat most of the cost.

“I kind of went into John Rambo mode,” he said. “My staff helped rebuild it and we got it open in nine business days. The biggest thing was keeping everybody calm.”

As for his new location, Hershey said he sees Richmond as a proving ground for Chicano Boy. 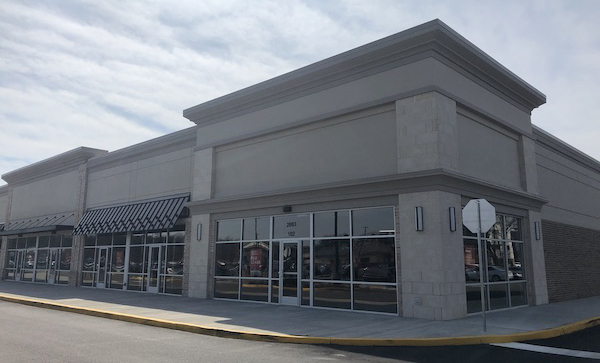 “We want to know whether this concept is truly scalable or not,” he said. “It’s a big city, it’s the capitol, all the major competitors are there and it has an amazing food scene established already. We want to put the concept against all these different pressures to show where we need to be better and to get a grip on what the feelings are for this (concept).”

If the Huguenot location does well, Hershey said he has plans for a third location in the city proper.

“Richmond has the population to support more stores. To be geographically centered in Richmond would be really smart,” he said.

Huguenot Village was redeveloped in 2019 with Publix as its anchor tenant. Chicano Boy Taco is the first confirmed tenant for the project’s Publix-connected building. Thalhimer’s David Crawford and Kevin South handle leasing on the project.

Hershey said he’s excited to get the Richmond spot open, something he hopes to have done by August.

“We’re still very fired up about the food. I have a great staff that is, along with our guests, allotting me this opportunity,” he said.

I’m surprised at his choice of location I confess. That’s chain restaurant world. Unless he’s looking to start a chain…

Charles, the only reason you say that is the lack of privateers in the area. We welcome them and look forward to having independent places to support. It’s difficult to find locally owned eateries in our area that we can support.

I’ve been to Chicano Boy in Staunton many times and am so excited about this news!!! Best of luck Justin & team!

I can tell you this Midlothian is a tough area people know who they support among restaurants and they stick with them. If Chicano Boy starts off strong he will survive in Midlothian. California Mission Style tacos and burritos arent my style but I do wish this young man luck and hope he does well.