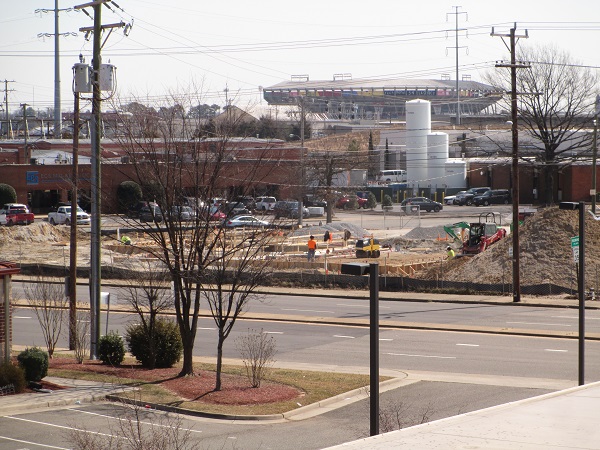 The Carvana construction site as viewed from the I-195 expressway. (Jonathan Spiers photos)

Site work is underway for what effectively will be the newest — and perhaps flashiest — billboard along Interstate 195.

Crews have started work on the “car vending machine” tower that online auto seller Carvana is erecting at 2201 Westwood Ave. The 1.6-acre site is at Westwood and Hamilton Street, across the expressway from TopGolf.

The $4 million facility is replacing the former ERNI Electronics building, which was demolished last year. The electronics manufacturer, which had based its U.S. sales headquarters there since 2008, has relocated to a new office near Brandermill.

In the building’s place will rise a multistory tower and adjoining customer center, where car buyers will be able to retrieve their online purchases from a 12-tier, window-paneled structure. 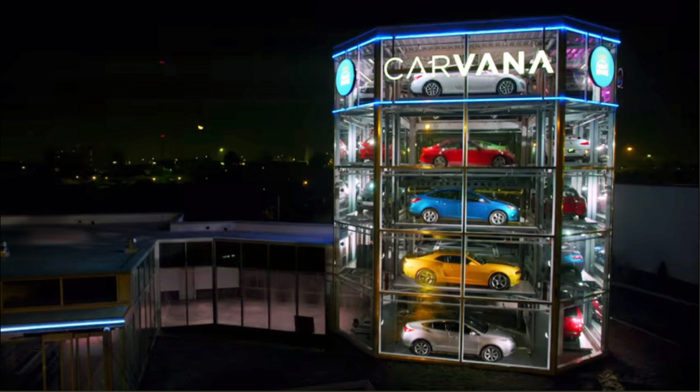 Purchases are lowered to customers from the automated tower, which also serves as a vehicle display and will be visible from the expressway.

It isn’t clear when the car tower is scheduled to open. Carvana did not respond to questions from BizSense Tuesday.

The structure will be Carvana’s first in Virginia, and its first physical storefront in the Richmond market.

It had previously proposed a similar facility on land along Interstate 64 near Short Pump, within a mile of Richmond-based competitor CarMax’s original location. It withdrew that proposal after failing to find agreement with neighboring property owners, who had a say in the land’s use.

Carvana currently distributes vehicles from an undisclosed location in Petersburg. It had been planning a $25 million, 200,000-square-foot vehicle inspection and processing center in Chester but scrapped that project last summer. 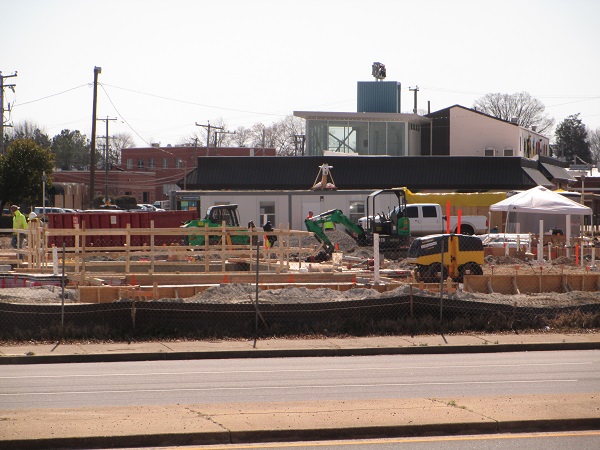 The site at Westwood Avenue and Hamilton Street is adjacent to the SPARC performing arts building, visible in the background.

The company purchased the Westwood site last year for $1.75 million. A building permit filed with the city says the center will include delivery bays, wash bays and an office area.

Colorado-based Catamount Constructors is the contractor on the project, and North Carolina-based WHN Architects is the designer. S.B. Cox handled the demolition.

Carvana has built two dozen of its signature car vending machines across the country, including three in North Carolina and one in Maryland. This week, the company secured approval for a new tower in Denver, as BizSense sister site BusinessDen reports.

Carvana in CarMax’s backyard! A disruptor getting disrupted? Reminds me of Best Buy’s move into RVA when Circuit City’s backyard many years ago. I’m rooting for the home team. Nonetheless, it will be interesting to watch the competition unfold.

Its a tacky gimmick. Makes the area look cheap. But so the other used car lots in the area. At least they’re spending some money on the construction. Hopefully they’ll create some lasting jobs for people.

I love the way these car vending machines look and it’s mostly good to see development in the city that is of a higher/more dense use. However, drivers on that curvy stretch of 195 do not need more distractions.

Good point. I have seen a few drivers spinout in that curve on a rainy day. But, hey, those drivers might be looking for a new car sooner than they planned, which is good biz for Caravana…haha.

As if Top Golf wasn’t enough of an eyesore. Now we’ll have two.

Yeah, that whole industrial zone/interstate interchange/railyard area has been a popular backdrop for wedding photos and postcards for years. Now it’s gonna be ruined.

I appreciate your humor.