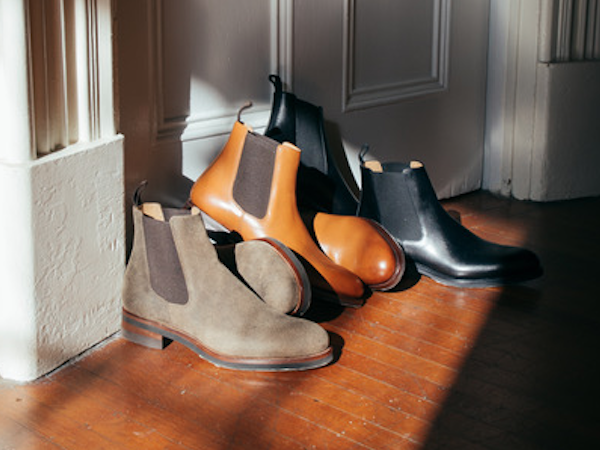 The company last week unveiled its first in-house shoe brand, Tangier, launching with a lace-up boot and a Chelsea boot in several colors at $425 a pair.

Ledbury co-founder Paul Trible said a combination of his personal affinity for footwear and customer interest in shoe options from the company spurred the concept’s development.

Trible said the decision was made to create a distinct brand for the shoes to give them their own identity.

“Footwear and clothing are two different things even though we think of them living in the same closet,” Trible said. “We wanted to develop something unique that could live in Ledbury and live outside it. In doing that, it really (says) that we think this is something we can build.”

Ledbury designs the boots, which are produced at a factory outside Milan, and sells them online and at the company’s Richmond flagship store at 315 W. Broad St.

Additional styles of boots and shoes will be introduced in the $300 to $400 range.

Trible decline to share the investment made in Tangier, but said it was “substantial.”

Tangier doesn’t have any dedicated staff and the brand is managed by Ledbury employees, though that could change if the concept takes off. The company has 20 employees.

Ledbury does have an additional helping hand in the venture from Ron Rider of Richmond-based Rider Boot Co. Rider has served as an informal adviser to help Ledbury get its sister brand off on the right foot.

“We know a lot of footwear folks being in the industry. What I like about what Ron does is (the shoes) feel so custom and unique,” Trible said.

Ledbury and Rider collaborated on a special-edition boot a year and a half ago. Trible said that later led to discussions with Rider about how to do a shoe that would fit the Ledbury style.

“(Trible) has a great eye and vision for what he wants Tangier to be, and my job is to simply guide his needs and make sure our factory in Italy is producing what they have developed,” Rider said. “I am more of a sounding board on the U.S. side and an organizational guy on the Italian side.”

Rider Boot closed its Jackson Ward shop at 18 W. Broad St. in November 2019, where it had opened three years earlier. The company has largely paused operations during the coronavirus pandemic, though it has continued some online sales during the last year. The company expects to ramp up again in the fall, Rider said in an email.

Ledbury made some changes of its own during the pandemic, including a pivot into mask production when offices shuttered and the transition to remote work cut into sales of its mainstay dress shirts.

More recently though, Trible said sales have shifted back toward its clothing products, which account for about 75 percent of business these days.

“The pendulum has certainly swung back toward clothing,” Trible said, adding that he remains bullish on the brand’s ability to stay in demand amid the unpredictable return to office work.

“The office of the future, at least in the near term, has changed dramatically. We think there’s something powerful and productive about face-to-face and we think there will be demand for that,” he said. “People will still need to look professional and more and more personal interactions are going to happen, whether it’s a meet-up for coffee or a day in the office, and you can’t do that in sweatpants.”

Ledbury also expects to revisit pre-pandemic plans to expand its brick-and-mortar footprint. The company permanently shuttered its New York City store during the pandemic, but could make a return there and plant its flag in other cities. Ledbury’s Richmond store is fully opened, and the company is doing appointments at its store in Georgetown.

As for the Tangier brand name, it’s a reference to Tangier Island in the Chesapeake Bay, which is home to a small community of watermen known for their distinctive English dialect. Trible, a Northern Neck native, visited the island as a kid and said the community left an impression on him.

“I thought it was a unique and distinctive place. I filed the name away in my head,” he said. “We landed on that as a placeholder but we felt it went with the brand feeling.”