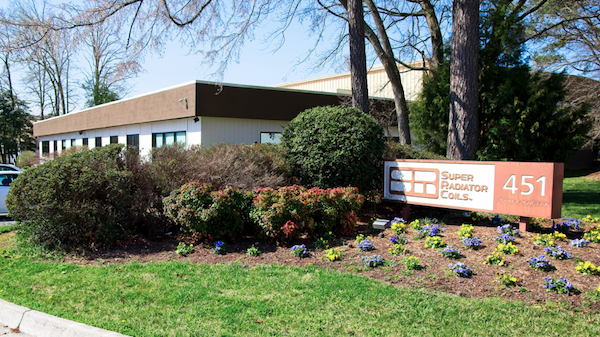 A Minnesota-based coil manufacturer plans to expand its Chesterfield County facility for the third time since it opened in 1980.

Super Radiator Coils is expected to spend $9 million to increase the size of its 121,000-square-foot manufacturing and engineering facility at 451 Southlake Blvd. by 56,000 square feet, the county announced Monday.

Super Radiator Coils builds specialty cooling coils that are used by data centers, food processors, the military and other industries.

The company, which also has facilities in Arizona and Minnesota, expects to break ground on the project in April, and construction is expected to take about a year.

The new construction will be built on company-owned land, and the additional square footage will be added to the existing building.

Much of the addition will be manufacturing space, but about 5,000 square feet will be for employee amenities like a break room and restrooms, said Matt Holland, vice president of operations for the company’s Richmond division.

Holland said the company expects to add up to 50 new jobs as part of the expansion. The facility currently has about 210 workers. Those new jobs are expected to pay an average of $18 an hour plus benefits.

“We’ve been here a long time and done a couple different expansions over the years and Virginia has been a good place for us to do business,” Holland said. “We had to decide where to expand our facilities between Arizona, Minnesota and Virginia. Our Virginia business continues to grow as we supply the East Coast. It just made sense to expand here.”

Leipertz Construction will build the expansion, which was designed by architecture firm Baskervill.

The expansion has been in the works since spring of last year prior to the coronavirus pandemic, which contributed to a delayed timeline for the project.

The county agreed to pay the company a $50,000 match as a reimbursement for the expansion after the project is completed, said Tina Shreve, a senior project manager with the county economic development department.

The county’s economic development authority recently sold about 54 acres in Meadowville Technology Park to Columbia, South Carolina-based Red Rock Development for $3.2 million, land on which the developer plans to build a 350,000-square-foot warehouse on spec. In December, the EDA announced it had picked up 2,000 acres for $13 million near Moseley.