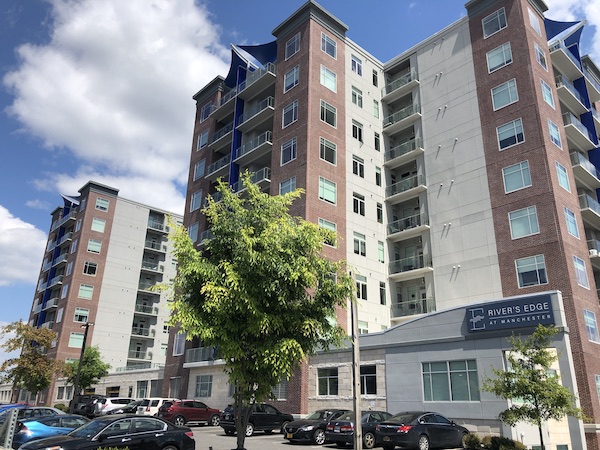 The 10-story tower was completed in 2018 and will be joined by two more towers to the west. (Mike Platania photo)

As they plot two additional riverfront towers in Manchester, two local developers have offloaded their first major addition to the neighborhood’s skyline for nearly $50 million.

The tower’s new owner is Four Mile Capital, a five-year-old real estate investment firm based in Denver. Per its website, Four Mile exclusively targets multifamily buildings and has over 20,000 units under management across the country.

Neither Four Mile Capital nor Blundon were available for comment by press time.

The deal closed April 19, according to city property records, and the 1.8-acre parcel was most recently assessed at $43.1 million. Bruce Milam of Bruce Commercial Realty and Berkadia’s Drew White represented Blundon and Purcell in the deal.

The sale of River’s Edge comes as Blundon and Purcell, along with Charlottesville-based investors Keith Woodard and Ludwig Kuttner, are preparing to break ground next door on River’s Edge II at 301 W. Sixth St.

Totaling 344 apartment units, River’s Edge II is set to be twin 11-story buildings connected by a sky bridge on the top level. The developers purchased the 2.2-acre site last spring for $8 million, and work has yet to begin.

The original River’s Edge was built on part of the former Reynolds Metals plant as part of Thalhimer’s City View Landing development. The building was completed in spring 2018.

Congrats Bruce! Looks like your off to a good start with your commercial real estate firm!