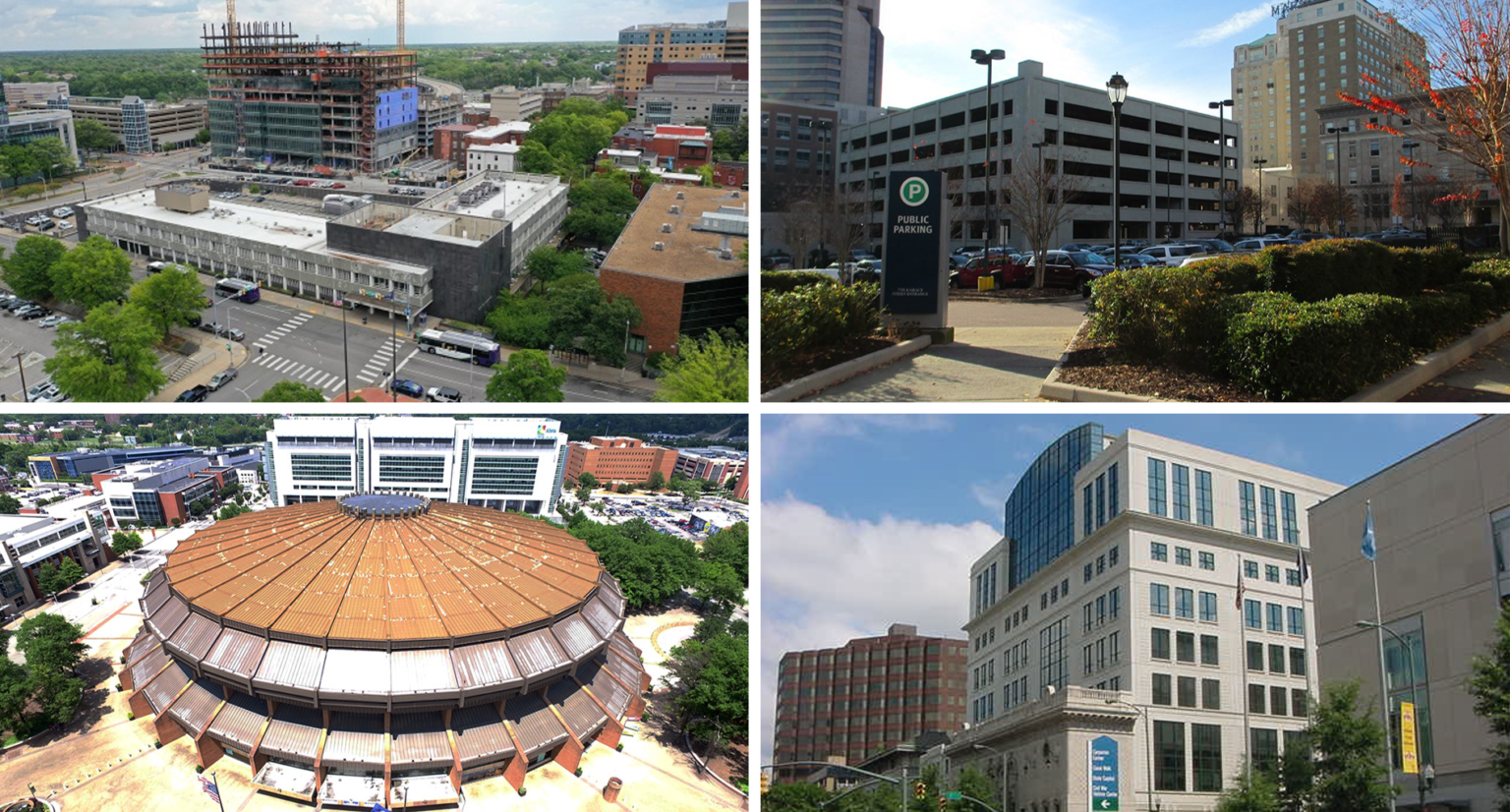 Three of the city-owned properties included in the real estate disposition plan include, clockwise from bottom left: the Coliseum; the Public Safety Building at Ninth and Leigh streets; and the parking lot at 609 E. Grace St. The Theatre Row Building on Broad Street, bottom right, is not included in the plan after being considered for a surplus declaration last year. (BizSense file and submitted photos)

Efforts to position the Richmond Coliseum and other city-owned properties for redevelopment took a step forward Monday night, as the City Council approved a plan for disposing of dozens of parcels deemed to be surplus — including the long-dormant downtown arena.

The council formally adopted a real estate disposition plan that city administrators first proposed last fall. The biennial plan lists 77 properties that the city wants to unload to housing nonprofits and private developers, with a goal of adding to the city’s tax base and increasing its supply of lower-income housing.

The bulk of the parcels, totaling nearly 150 acres’ worth of land, is earmarked for disposition to housing nonprofits. Among them, 36 parcels are likely to go to the Maggie Walker Community Land Trust, which manages the Richmond Land Bank, and 24 parcels to other housing nonprofits through a competitive request-for-proposals (RFP) process.

Rounding out the list are 17 parcels that, combined as assemblages, make up six sites that administrators have identified as economic development sites. Totaling 85 acres among them, the sites include the Coliseum, the 60-acre site along Arthur Ashe Boulevard that includes The Diamond, the Fulton Gas Works site, and about 7 acres of public works properties at the southern end of Barton Heights.

Also on the list is the city parking lot across Clay Street from the John Marshall Courts Building, as well as the adjacent Public Safety Building site, which the City Council just recently OK’d to sell to developer Capital City Partners for a planned 20-story, VCU Health-anchored tower and mixed-use office complex.

The five remaining private development sites would likewise be disposed of through an RFP process, though it’s not clear when those RFPs could be put out.

Documents summarizing the plan do not specify a timeframe for disposing of the properties, and questions submitted to administrators Monday afternoon were not responded to in time for this story.

Mayor Levar Stoney, who presented the plan last fall along with his Equitable Affordable Housing Plan for the city, has indicated that RFPs for the most high-profile of those sites – the Coliseum and The Diamond – are imminent.

At a groundbreaking last week for Grenova’s new headquarters near The Diamond, Stoney said the city will be issuing its long-awaited RFP sometime this year for the 60-acre site that includes the aging baseball stadium.

The city also has been setting the stage for a Coliseum-area RFP through development of a small area plan that remains in the works. Administrators have said that that plan, which would be an amendment to the Richmond 300 master plan, would be presented this month and potentially adopted by summer, though no updates on the effort have been announced since March.

The fate of the Coliseum has taken on renewed interest since the announcement late last year of a new regional arena planned as part of a $2.3 billion development in Henrico County. That development, called GreenCity, is by the same development team behind Capital City Partners, which also was involved in the failed Navy Hill plan that centered on redeveloping the Coliseum.

City administrators have been looking to position the Coliseum and other Navy Hill properties for potential sale and development ever since. Last year, a group of properties including the Coliseum were proposed to be declared as surplus, though only the Public Safety Building was, amid concerns from councilmembers.

Most of those properties are included on the real estate disposition plan, though one is not: the Theatre Row Building at 730 E. Broad St., which was the only property involved in last year’s proposal that was not tied to Navy Hill.

At Monday’s meeting, the City Council approved a separate item involving the Theatre Row Building: an ordinance amendment allocating $352,000 from the sale of the Public Safety Building for renovations that would alter space previously leased by VCU for use by the Department of Justice Services and the Adult Drug Court program. That program had been housed in the Public Safety Building.

Other properties from last year included on the list are the parking lot at Broad and Fifth streets, across from the Greater Richmond Convention Center, and the bulk of the city block at 609 E. Grace St., across from the Dominion Energy Center.

Both of those are included in the 24 parcels earmarked for non-land trust housing nonprofits.

Other properties in that group, envisioned for multifamily and mixed-use development, include the so-called sandlot at 212 N. 18th St. in Shockoe Bottom, the old Oak Grove Elementary School at 2200 Ingram Ave., and two parking lots at Grace and Adams streets and at Grace and Jefferson streets. Also included are historic structures beside Carver and Holton elementary schools.

The 36 parcels on the disposition list that are likely to go to the land trust include 16 addresses in the 1900 block of Eastview Lane, in Whitcomb Court. Other parcels in that group, which is envisioned for single- or two-family attached and detached homes, are scattered among the city’s magisterial districts.

Yes, finally! I never understood why the city pleads for revenue, but sits on piles of real estate that could generate potential revenue if developed by someone else. Although perhaps some of these purchasers will not be paying taxes depending on uses.