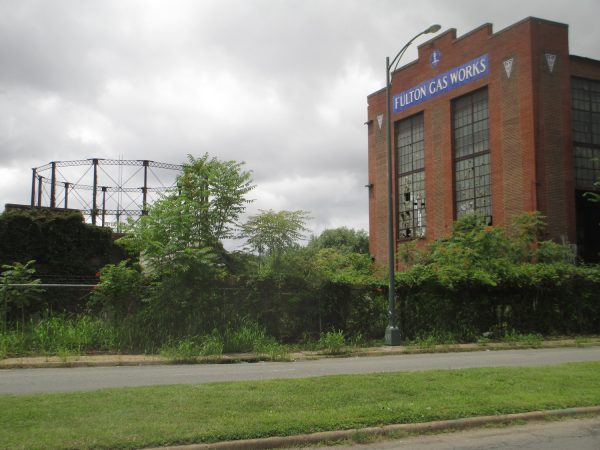 The City of Richmond’s efforts to remediate the former Fulton Gas Works site for reuse or redevelopment will mean the loss of nearly all of the site’s century-old structures, including the main building beside Williamsburg Avenue.

The city’s public utilities department, which owns the former natural gas facility just north of Stone Brewing, filed a permit application last week for demolition of all of the site’s above-ground structures, save for the circular-shaped gasometer building frame, which would be disassembled and later reassembled either there or at another site.

The blue enamel emblems on the main building also would be preserved for use in future development of the site. The city is considering the site for new facilities for the department, or selling it for private redevelopment. 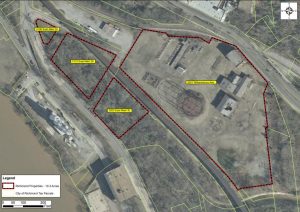 A map of the four parcels that make up the Fulton site. (Courtesy City of Richmond)

Initial plans had been to restore the property for use as a city building, but an assessment of asbestos and pollution remediation that is needed for the site to be developed in any way determined that the buildings would have to be removed, said Daniel Rifenburgh, engineering manager for the public utilities department.

“We have to remediate underneath them. Pipes are running under all those buildings to move the gas, so you have to get rid of all the subsurface conduits to move the pollution,” Rifenburgh said. “Once we found out where everything is, we had to basically dig out under the buildings too.”

Rifenburgh said the original idea for the site was to renovate it for the department’s use, though options include selling the land for private-sector redevelopment. The department has eyed the site for years for a possible central office for its natural gas division, Richmond Gas Works, as well as for potential economic development opportunities.

Once remediation is complete, the city’s planning and economic development departments would develop an area plan to determine the properties’ highest and best use. 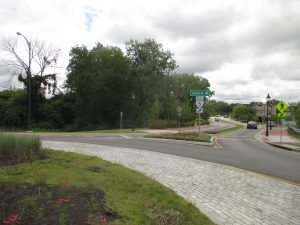 The wooded parcels along East Main Street are just beyond the traffic circle leading to Rocketts Landing. (Jonathan Spiers)

Remediation work got underway last year on three of the four parcels that make up the site, at 3100, 3110 and 3200 E. Main St. A second, separate remediation project for the Williamsburg Avenue parcel, where the structures are located, is estimated for completion by the end of 2021.

Both efforts are being paid for through Richmond Gas Works’ enterprise fund and are projected to cost $4.36 million combined. Locally based Timmons Group is providing engineering services and conducted the assessment.

Department spokeswoman Rhonda Johnson did not provide a cost estimate for the demolition project, which she said has yet to be put out for bid. She said demolition could start early next year.

Demolishing the structures goes against recommendations in the city’s Richmond 300 draft master plan update, which calls for redeveloping the site and preserving the Fulton Gas Works building as well as the gasometer, which it describes as historic. The recommendation is listed among “primary next steps” for the Rocketts Landing area. 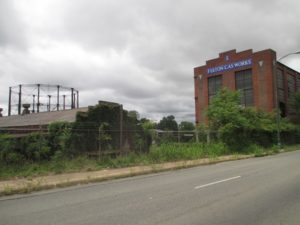 The blue enamel emblems on the main building would be preserved for use in future development of the site. (BizSense file)

Though eligible, the structures are not listed on state or national historic registers. City property records date the structures to 1900, and the site was rebuilt in 1925, according to a listing application for the nearby Armitage Manufacturing Co. building, which was listed to state and national registers in 2012.

The Armitage building, across the street at 3200 Williamsburg Ave., is in line for eventual redevelopment, following The Wilton Cos.’ purchase of that property and others around it in 2016.

Rifenburgh said the city previously documented and submitted the Fulton Gas Works site’s archaeological and structural resources for the National Park Service, which he said accepted them for its archives. Asked if the interest from the park service, which administers the National Register of Historic Places, was cause for any concern about demolishing the structures, Rifenburgh said it wasn’t.

In addition to the structures, the demolition work would include removal of asphalt, concrete, gravel and “other associated site features,” according to the permit application, which was filed July 27. The application is listed as pending review.

Correction: An earlier version of this story incorrectly described listings on state and national historic registers as providing protections from demolition. Listings encourage preservation but do not provide protections on their own.

I get that there are pipes under the building and that is part of the remediation. And I also understand the more difficult you make the remediation the less likely this property is ever brought back to use. But is there a middle ground? What about instead of saving the entire building they just save the once façade that has the blue Fulton Gas Works emblem? Then some history and architectural merit on the site can be preserved.

Isn’t this project related to Stone Brewing, which i guess now with the Pandemic is not building a beer hall?

To my knowledge, this property has never been involved with Stone. They have parking next door, however.

Seems sad to lose that iconic building. History should be more than saving the mansions of The Rich. Look what the British did with their Battersea Power Station.

Richmond has its own personality and character in the same way that NYC and New Orleans do. Removing these buildings that look and feel “Richmond” kills a part of the personality and flavor that make Richmond unique, until all you have left is Anywhere, USA.