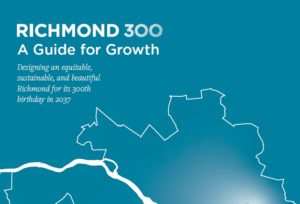 Four years’ worth of work. Scores of workshops and meetings. Hundreds of recommendations. A 20-year vision.

There’s a lot represented in the 200-plus pages that make up Richmond 300, the draft update to the city’s master plan that’s meant to guide growth through 2037, Richmond’s 300th year.

As the plan’s public comment period comes to an end tonight, with feedback accepted until midnight, here’s a look at some of the ideas that stand out from the pack, listed in no particular order.

And for more coverage of the plan’s contents, follow these links to our articles on recommendations for Jackson Ward, areas near The Diamond, Southside and Stony Point Fashion Park. 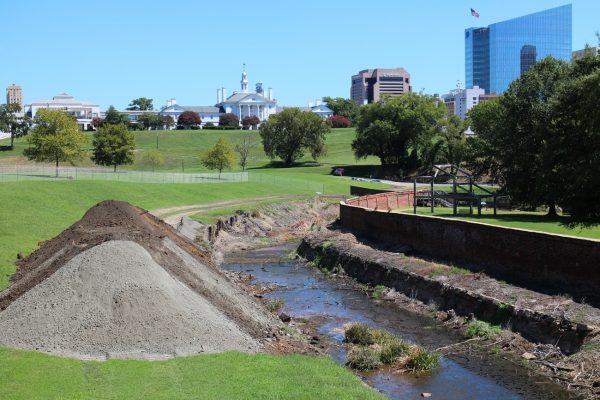 Part of the Kanawha Canal on the NewMarket Corp. campus was filled in last year. (BizSense file)

Two hundred years ago, according to the document, Richmond’s Kanawha Canal stretched nearly 200 miles upriver from downtown, providing a controlled water route for shipping goods and passengers as far west as Botetourt County. Richmond 300 recommends returning the city’s unused portions of the canal to how it functioned in 1820, complete with a reopening of the lock at Great Shiplock Park.

While not detailed in the plan, the concept is reflected on maps showing future road, bridge and greenway connections. The canal also is mentioned among greenway routes that the plan suggests developing to create an interconnected, regional network.

Returning water to the canal is not a new idea, as proponents, including Historic Richmond, and local attorney and preservationist Jack Pearsall, have been calling for it for decades. A 1988 plan called for restoring and reconnecting the locks so that boats could run continuously from Haxall Point in Shockoe Slip to as far west as Maymont and potentially beyond. In the next decade, a roughly 1-mile stretch between Fifth and 17th streets was opened in phases to create the Riverfront Canal Walk.

Already considered an expensive and logistical challenge, the concept of continuing the canal westward appeared less likely last year, when NewMarket Corp. covered and partially filled the portion of the canal that runs through its campus. The project was designed so the section could be unearthed later. At the same time, it created a sunken greenway that the company planned to complement with interpretive signage.

Tunnel under the expressway

In recommending connections where highways and interchanges create barriers, Richmond 300 endorses a previously proposed concept of a pedestrian tunnel under the Downtown Expressway at Shockoe Slip, in alignment with a former right-of-way for 13th Street between Byrd and Virginia streets. 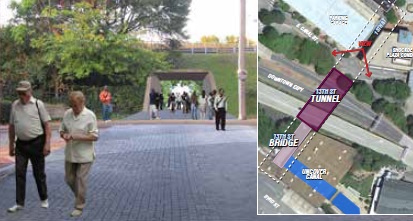 Images of the proposed 13th Street pedestrian tunnel under the Downtown Expressway.

The so-called 13th Street tunnel would run from Canal Street at Shockoe Lane, now a pedestrian walkway beside The Martin Agency, and connect with a right-of-way south of the expressway that leads to Pipeline Overlook, between Haxall Point and the Pipeline trailhead. The route falls between The Locks Apartments complex and an old warehouse building that’s part of the site of a planned hotel along the canal.

The concept was pulled from the 2012 Richmond Riverfront Plan, one of many previous plans that were used in developing Richmond 300, which is meant to consolidate them as one guiding document.

There’s a reason for all those new apartments

Richmond’s population grew by more than 32,000 residents since 2000 – the first time the city added residents over a 20-year span without annexing land, according to the plan. The last time such growth occurred was between 1920 and 1940, when the population increased by 12 percent, the plan states. The city’s 21st century growth through last year outpaced that, increasing 17 percent from nearly 198,000 residents in 2000 to over 230,000 in 2019.

Driving that growth are young adults and retirees, with Richmond boasting a higher growth rate among millennials and baby boomers than its neighboring counties. According to Richmond 300, the number of 25- to 34-year-olds in the city grew by 43 percent, while the 55- to 74-year-old demographic grew by 38 percent. Henrico and Chesterfield, by comparison, had 6 and 11 percent growth respectively among millennials, and 32 and 33 percent growth among boomers.

The plan encourages development of more housing options in Richmond with recommendations, including the creation of 10,000 new housing units for very-low and low-income households in the next 10 years.

Planners were wrapping up the draft just as the coronavirus pandemic’s effects hit Richmond, prompting a late addition in the form of a survey of what residents want in a post-pandemic world. More than 400 responses painted a picture of the future, with respondents predicting desires for, among other things, more private balconies and porches.

Other results showed respondents believe Richmond will continue to grow in population, teleworking will continue above pre-pandemic levels and more people will use digital engagement than before. Respondents said they also will want more sidewalks and parks, and will bike-ride and walk more, while mass transit use may decrease or return to previous levels.

Paul Goldman missed his calling as an urban planner

In its recommendations for Carytown and pedestrian improvements citywide, Richmond 300 encourages consideration of closing off Cary Street to traffic – either permanently or occasionally – to make Carytown more conducive to pedestrian, bicycle and retail use.

Closing Carytown to vehicles has been pitched before, notably by local attorney and activist Paul Goldman when he ran for mayor in 2008. Goldman said he would pursue the concept if elected, envisioning Carytown as a pedestrian mall a la Charlottesville’s Downtown Mall.

Richmond 300 suggests a modified version, encouraging the city to consider weekend closures of Cary Street in Carytown and of Riverside Drive to open those roads up for bicyclists and pedestrians.

“Though Carytown currently is a walkable node, the movement of people not cars should be further prioritized by limiting vehicular access to Cary Street, whether permanently or temporarily, while accommodating other modes of transportation,” the plan states, going on to suggest that the city “Explore the opportunity for permanent or temporary street closure of Cary Street in Carytown to limit use to bicycle, pedestrian, transit, and retail use.”

In recommending the development of so-called “Complete Streets” and “Great Streets,” with buildings close to the street, safer pedestrian crossings and enhanced transit, Richmond 300 includes a conceptual rendering of what Arthur Ashe Boulevard beside The Diamond could look like with such an approach. 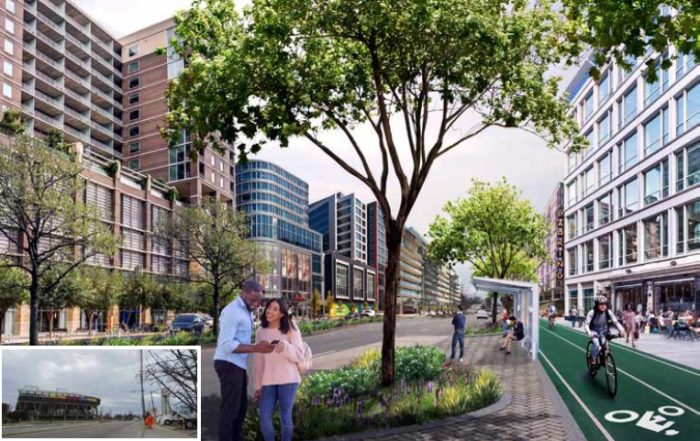 A conceptual rendering in Richmond 300 of how Arthur Ashe Boulevard could develop after The Diamond, pictured lower left, is relocated.

One use of the rendering includes the caption, “The proposed transformation of Arthur Ashe Boulevard near the Diamond accommodates multiple modes of transportation.” Another is coupled with a rendering of a suggested crescent-shaped park along Hermitage Road that’s designed to balance out the growth along the boulevard.

The “Great Streets” approach likewise is recommended for West Broad Street and nearby Hermitage Road, with the addition of street trees, lighting and other amenities. The plan suggests that the boulevard and Broad “transform into high quality urban avenues that are safe to cross, while becoming a destination in their own right for residential, office, retail and compatible entertainment uses.” 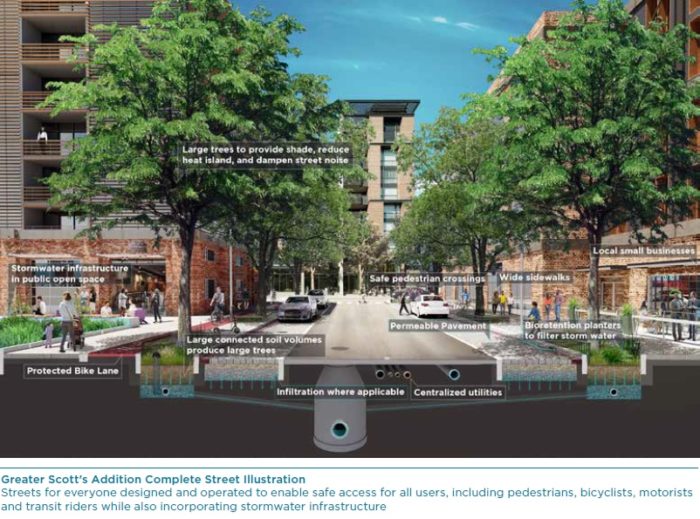 A rendering of the plan’s “Complete Streets” approach that also informs its “Great Streets” suggestions.

The full Richmond 300 draft plan can be viewed here. Public comment on the plan is being accepted through midnight tonight.

The number one principle of successful planning is to involve the affected community.
Oregon Hill has participated in the process from the beginning but our input has been ignored. The planning process is illegitimate if the input from the affected community is ignored. We have consistently demanded a residential future land use designation for our residential Oregon Hill Historic District.

Ironic that the City took 3 1/2 years to get to the public review and has rushed it through during a pandemic with public meetings one HAD to register to attend.

What makes you think that your input has been ignored as opposed to other city residents input being also heard?

The night the rioters tore down the Columbus statue there were no police whatsoever on the ground. Clearly they had been given the order to stand down. Levar Stoney and his cronies are controlling who receives police protection and who doesn’t. I voted for Stephanie Lynch for city council, which I now deeply regret. Richmond is no longer a democracy, it’s a banana republic run by crooks who belong in prison.

Richmond should now prepare for shrinking business and residential sectors. Who wants to live and work in a city where the Democrats are using the mob as a political weapon?

Wouldn’t most Americans wish to live in a district where politicians are responsive to the requests and demands of their constituents?