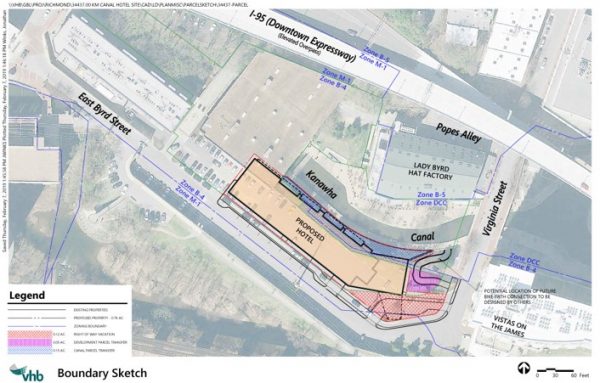 AC Hotel by Marriott is set to rise on about 0.8 acres near Byrd and Virginia streets. (Photos courtesy KM Hotels)

A Henrico-based hotelier is making its first splash in the city with plans for an eight-story hotel downtown.

KM Hotels is planning to construct the state’s first AC Hotel by Marriott on part of a nearly 2-acre site at 1300 E. Byrd St., along the south side of the Kanawha Canal.

Plans call for the 150-room hotel to rise next door to the Lady Byrd Hat Factory building and across Virginia Street from the Vistas on the James condominium building.

The project also would include 10 residential condominium units, a 4,000- to 5,000-square-foot rooftop restaurant that the group is negotiating to be run by Chris Tsui’s EAT Restaurant Partners, and about 3,700 square feet of retail space along the canal side of the building. 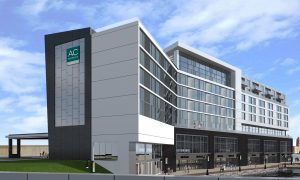 A view of the proposed AC Hotel by Marriott from Kanawha Canal. Renderings courtesy nbj Architecture.

Launched in the U.S. by Marriott International in 2013, AC Hotel is the chain’s latest boutique concept for business travelers and visitors.

There are 53 AC Hotels operational throughout several large and midsized metros, with Marriott planning to establish 75 additional locations nationally in the coming years.

“It has a similar feel to the Quirk Hotel … with upscale European design and amenities,” said Mayur Patel, KM Hotels’ president and chief operating officer. “It will serve the higher-tiered, millennial corporate clients traveling into Richmond.”

Pending city approval, construction would begin in the first quarter of 2020, Patel said, with a delivery date in late spring or early summer 2021.

Plans call for a two-story parking deck via East Byrd Street with 78 parking spaces, Patel said. The hotel’s lobby will be located on the ground floor and include pedestrian access to Kanawha Canal.

All of the hotel’s rooms and condos will be located on six levels above the parking deck and lobby area, Patel said, each with views of either the James River or Kanawha Canal. A similar conference room also is planned for the property that will have views of the canal.

Looking to help enhance the Canal Walk experience, Patel said his firm has proposed an idea to allow the city to construct a bike ramp on its property along Virginia Street that would connect the Virginia Capital Trail with the Canal Walk. The group also is working with the city to reconfigure the Byrd and Virginia streets intersection. 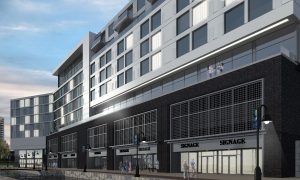 All of the hotel’s rooms and condos will have views of either the James River or Kanawha Canal.

Other hotel amenities include a 24-hour fitness center, and a breakfast bar and lounge.

Land deal in the works

KM Hotels is under contract with North Falls Acquisitions LLC, a business entity comprised of Fountainhead Properties’ Tom Papa and WVS Cos.’ Jason Vickers-Smith and Richard Souter, to purchase about 0.8 acres of the 1.8-acre tract at 1300 E. Byrd St. for an undisclosed amount.

Andrew Condlin, an attorney with Richmond-based law firm Roth Jackson who is representing KM Hotels, said the firm will close on the property once city officials approve the project.

The project also is under review by the Architectural Review Board of Venture Richmond, a process necessary for owners of property along the riverfront that are planning new construction.

A cost estimate for the project was not released.

As part of the agreement, Condlin said North Falls plans to raze the existing 22,000-square-foot warehouse building to make way for the hotel.

North Falls originally had the entire parcel under contract with local developer Charles Macfarlane, who had planned a 10-story, 144-room Hyatt Place hotel on much of the site.

Both sides voluntarily withdrew their claims last summer without resolving the matter.

AC Hotel will not require access to Pope’s Alley for the project to be developed.

The property falls within the Downtown Civic and Cultural District (DCC) and the B-4 Central Business District zoning, which allows the development to take place without a rezoning, Condlin said. 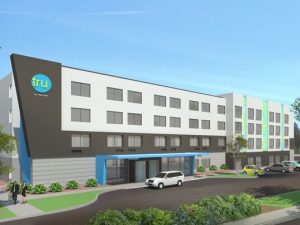 The company has been busy in metro Richmond, most recently breaking ground on a new Tru by Hilton hotel in Ashland.

A 119-bed Residence Inn also is under construction on the former Skilligalee restaurant site at 5416 Glenside Drive in Henrico County by KM Hotels, and it is remodeling the Holiday Inn Express at 2000 Staples Mill Road. It also recently converted the remaining Red Carpet Inn, which sits next door to the future Tru by Hilton in Ashland, into a Red Roof Inn.

The canal has so much potential but ultimately falls flat with a severe lack of energy after work hours (it’s used primarily by walkers/runners). This hotel, given the canal-front retail shown in the rendering, can play a large role in boosting that energy. Would loved to see more parking, so it can be utilized by nearby businesses and area visitors, but that’s tough to do with the canal there and no real means to go underground. I ask (not like my opinion matters) for two things with this project: 1. They fill the retail with something other than a handful… Read more »

I like to see better screening *windows vs. open screen on this side) of the parking garage on the canal side of the building but this is a great project.

The windows add a significant cost to the ventilation and fire suppression systems. I’m guessing that has a lot to do with the open parking space.

Another great project by KM Hotels. The 10 residential condominium units are out-of-the-box thinking for Richmond and a good idea. I look forward to enjoying the rooftop restaurant. I think how far the CBD has come in 25 years. This hotel continues that progression. Best Wishes to Mike and all of KM Hotels.

Looks like a great project that will add more dynamism to the neighborhood. Good luck to KM Hotels.