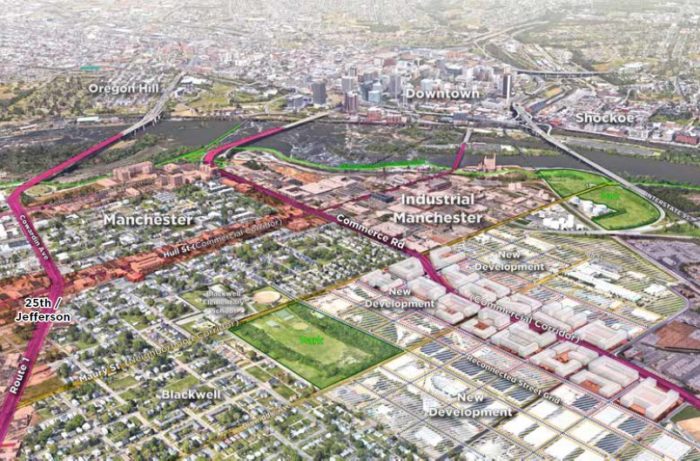 A Richmond 300 aerial rendering of priority corridors and envisioned greenspaces in the Manchester area of South Richmond.

Such ideas are among a slew of suggestions for Richmond’s Southside that are included in the recently released Richmond 300 plan, a proposed update to the city’s master land-use plan aimed at guiding area growth over the next 20 years.

The half of the city on the south side of the river is given a considerable amount of attention in the 200-plus-page document, which city planners and consultants have been rolling out in recent weeks ahead of potential adoption by City Council later this year.

Under development for years, the draft plan includes recommendations for several corridors and crossroads where planners see the most potential, and need, for guided growth in South Richmond. Priority areas include Route 1 at its intersections with Bellemeade and Bells roads, the Southside Plaza area, and Commerce Road south of Manchester, among others.

Recommendations are also offered for various crossroads identified as “neighborhood nodes” in the plan, including an intersection on Hull Street Road where planners see potential for what’s described as a mixed-use “town and family entertainment center.” 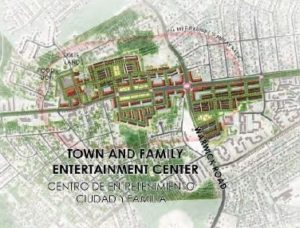 A conceptual rendering of the town center envisioned at the intersection of Hull Street and Warwick roads.

The plan envisions that center at Hull Street Road’s intersection with Warwick Road, where several sizable tracts are wooded and undeveloped. Those tracts could facilitate, according to the plan, a coordinated development of mixed-use buildings that could serve as a town center and gateway to the city, along with infill development of existing parking lots and underdeveloped parcels.

The concept for the intersection was previously floated as part of the Hull Street Corridor Revitalization Plan, a joint effort in 2013 by the city and Chesterfield County. That plan is one of many that were used in developing Richmond 300, which is meant to consolidate them as one guiding document.

The town center concept would depend on participation from property owners, as well as updated zoning and infrastructure improvements by the city.

Recommendations in the plan include rezoning parcels that are zoned B-3 General Business or OS Office-Service to districts that would encourage more pedestrian-focused development, among other steps the city should take. 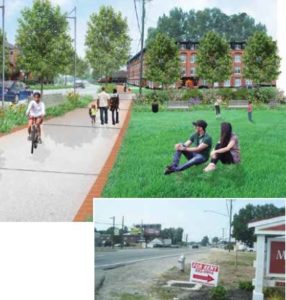 Images in the Richmond 300 plan visualize the town center concept.

The larger vacant tracts in the intersection’s southeast corner are owned by LLCs tied to Seminole Trail Properties, a Charlottesville-based real estate development firm. A call to the firm this week was not returned. Other vacant land nearby include parcels owned by All Saints Child Care Center and by Frank Cava, a local real estate investor and developer.

The area already is attracting new development projects. Virginia Beach-based Kemp Enterprises is planning a hybrid residential-and-storage development on about 12 acres on the north side of Hull Street Road east of Warwick. City Council last month approved an amendment to that project, which now calls for a minimum of 240 age-restricted apartments and 157,000 square feet of self-storage space. 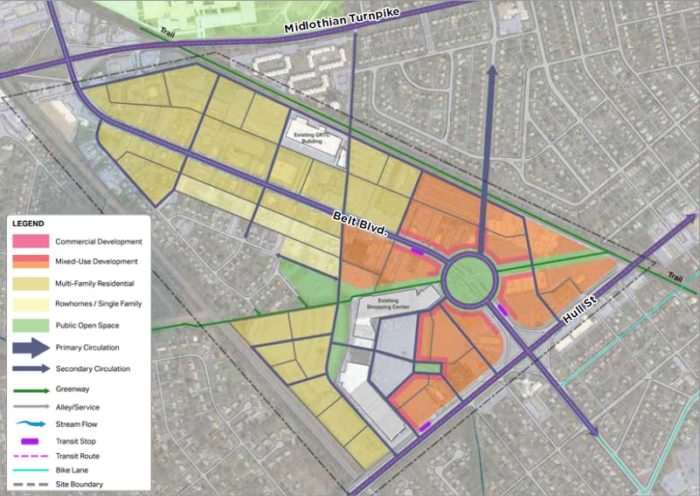 Suggestions for the Southside Plaza area include a roundabout on Belt Road beside the shopping center.

At Southside Plaza, about a mile east of Warwick, planners envision the area along Belt Boulevard as a hub of housing, recreation and entertainment with commercial and mixed-use development surrounding a central roundabout.

The traffic circle would revive a former road configuration that involved a roundabout at the intersection of Hull and Belt, where a signalized crossroads replaced it in the 1960s. The roundabout in the plan is suggested about 500 feet north, near the northern end of the Southside Plaza shopping center. 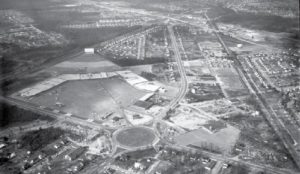 A Library of Virginia photo from the 1960s shows the former traffic circle where the Hull and Belt intersection is now.

The plan suggests filling the bulk of the center’s expansive parking lot with mixed-use buildings, and filling the former drive-in theater property behind it with rowhomes or other single-family residences. The traffic circle would be positioned to align with Roanoke Street, providing a potential connection to nearby residential neighborhoods.

The circle also would align with a powerline right-of-way that could create a greenway connection with the planned James River Branch Trail, which would run along an abandoned railroad line nearby. The plan recommends completing that trail, which would run from Westover Hills Boulevard just north of Midlothian Turnpike to Route 1 near Bellemeade Road, where it would pick up the planned Ashland to Petersburg (ATP) Trail.

The plan describes Southside Plaza as a high-growth-potential area, with 54 acres of vacant or undeveloped land in 2019, representing about one-third of its total land area.

If completed, James River Branch Trail would provide a greenway connection to Route 1 near Bellemeade Road, which along with Bells Road is a priority crossroads in Richmond 300. Bellemeade also connects to Commerce Road, which the ATP Trail would follow before continuing south on Route 1 to Petersburg.

In a presentation last month – one in a series of virtual summits that planners and consultants have used in recent weeks to highlight various aspects of the plan – Olinger emphasized the impact that the ATP Trail could have on development trends in the area, particularly along Route 1, where the plan encourages a mix of industrial and mixed-use development akin to Manchester.

“In the nine years I’ve been with the city, the question comes up: What are we going to do with Route 1?” Olinger said, noting recent planning efforts by Chesterfield to invigorate its portion of the corridor, as well as activity in the corridor picking up north of the city.

“We really need to spend more time thinking about the future of this area, rather than just playing around the margins, and give it the attention it deserves,” Olinger said. “I think the entire Route 1 corridor, from Cowardin (Avenue) all the way down to the city limits, needs to be thought of in much the same way that Chesterfield has thought about it and Henrico thinks about it and even Hanover.” 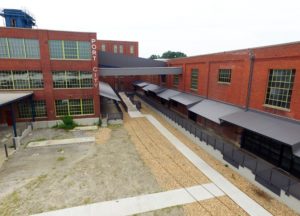 Olinger noted the redevelopment of the former American Tobacco Co. complex and similar plans for the nearby Model Tobacco property among examples of interest picking up along the corridor. Finding ways to continue that trend farther south, to the Bellemeade and Bells crossroads, is a goal of the plan, he said.

The plan recommends rezoning B-3 properties to encourage revitalization, as well as a complete rethinking of the B-3 district as development trends move away from its larger setbacks and surface parking requirements. Olinger said it’s been 45 years since the city conducted a comprehensive update to its zoning code. 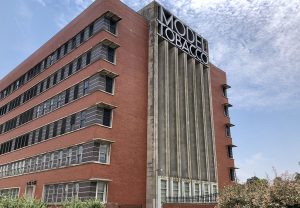 He said a more-detailed plan for the corridor is needed, as is an extension of mass transit such as GRTC bus lines. The plan also suggests creating a technology zone and other strategies to incentivize redevelopment, as well as housing programs to discourage displacement of current residents – the latter a suggestion repeated throughout the Richmond 300 document.

“We really need to spend some time working with everybody, thinking at what the long-term vision is for Route 1,” Olinger said. “There is stuff happening in the area. We need to see how all those pieces fit together.”

Commerce Road was a late addition to the Richmond 300 presentations, included at the request of City Councilmember Ellen Robertson, whose Sixth Voter District includes the transforming corridor.

In a virtual summit on the corridor last week, Robertson said her request was prompted in large part by concerns surrounding the Pamunkey Indian Tribe’s proposed casino-hotel complex, a $350 million project that the tribe is planning along the west side of Commerce south of Ingram Avenue. 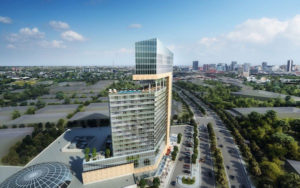 Robertson said she had heard from constituents concerned about the project’s potential impact on traffic and surrounding neighborhoods. A few of those constituents also spoke during the summit, questioning whether the project was a good fit for the area and stressing needs for other development, such as a long-sought grocery store.

Maritza Pechin, a planner with consulting firm AECOM who serves as Richmond 300’s project manager, noted that the casino project depends on a referendum that is scheduled to be held in 2021. She said more details about the development could be detailed in that referendum.

Robertson recently requested that the city conduct a redevelopment study of the Commerce Road area between Bellemeade and Semmes Avenue. City Council approved that request at its latest regular meeting.

The proposed casino site is just south of the former Caritas Furniture Bank warehouse that’s undergoing a conversion to apartments. The plan would encourage similar development along Commerce through an industrial mixed-use district that would create a transition between nearby residential neighborhoods and industrial uses closer to Interstate 95.

Planners noted other changes in store for the corridor, such as an approved roundabout interchange at I-95’s Maury Street off-ramp. They also mentioned talk of a potential new interchange at Bellemeade that could create an opportunity for a new river crossing as well. The Commerce Road presentation reflected those ideas, though planners stressed that such projects are likely decades out.

As for the Manchester area that includes Commerce Road, Richmond 300 identifies it as a high-growth-potential area, with 162 acres of vacant or underdeveloped land in 2019, representing 55 percent of Manchester’s total land area.

The full Richmond 300 document can be viewed on the plan’s website. Public comment on the plan is being accepted through Monday, July 13.

Great article, thanks for all of this information. Excited to see this come to fruition. Wondering if these locations will also be a part of the city’s Enterprise zone.

This might be better proposed directly to the Manchester Alliance but have the neighborhood or City considered making a master plan for the Hull Street corridor between Commerce and Cowardin? As I see it, all the corner locations at those intersections are undeveloped and as gateway locations, it would be nice to have architecturally striking buildings there to welcome visitors/residents. Old Town Manchester may also be a great stretch of street to try soemthing similar to Frenchmen Street in New Orleans or Broadway (but less touristy) in Nashville.

Start with changing that name of Jefferson Davis off that road.

What would that change other than a name, history still stands IF you beLIEve most of what you are told or whats perpetuated on the news. This is an article about new development in Richmond, not your opinion on the name of a highway. Why go through life worrying about a highway name… We need to stand together as a human race, not divided in sections. That highway is not holding you down from anything.