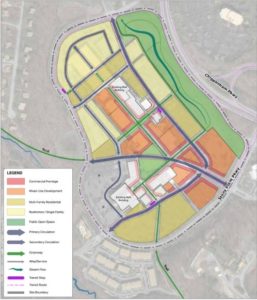 A Richmond 300 conceptual plan of the mall site shows additional buildings and connections, including a road bisecting the mall’s southern end. Click to enlarge.

As national tenants continue to vacate amid bankruptcies spurred by the coronavirus pandemic, urban planners behind a proposed update to Richmond’s master plan are not giving up on Stony Point Fashion Park.

The struggling shopping mall at the heart of its namesake hub that includes office, medical and residential buildings has suffered a string of tenant departures that has picked up in recent months, amid the pandemic’s economic effects and the mall’s fall into the hands of a special servicer in late April.

But the roughly 60-acre mall site remains a priority for city planners, who list it among a group of “priority growth areas” in the recently released Richmond 300 plan, a draft update to the city’s master land-use plan that’s intended to guide growth in the next 20 years, through the city’s tricentennial in 2037.

The plan envisions refashioning the fashion park site as a sort of urban village with mixed-use buildings supplementing the existing mall, and a mix of residential development filling the parking lots around it.

A central park and open area along Chippenham Parkway would add greenspace, and an expanded street grid would enhance connectivity within the site and with nearby trails and greenways. A conceptual plan included in the 200-plus-page document shows one such connector road bisecting the mall site, via its internal courtyards between Saks Fifth Avenue and Sur La Table.

That latter store is the latest to announce plans to leave the mall, following its filing this week for Chapter 11 bankruptcy protection. The announcement followed the recent closures of Stony Point’s Panera Bread and H&M locations, and national gym chain Life Time’s decision to nix a planned location there.

Richmond Planning Director Mark Olinger, who is guiding Richmond 300’s development along with consultants with national engineering firm AECOM, cited Life Time’s about-face while discussing the challenges that face Stony Point in a presentation. It was one in a series of virtual summits that planners have used in recent weeks to roll out the plan and highlight priorities. 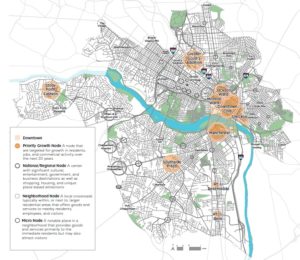 A map of priority growth areas and neighborhood nodes detailed in the Richmond 300 plan.

While he said it’s no secret that the mall had been struggling years before its owner was forced to let the mall go, Olinger said Stony Point still has “a lot going for it,” with several retailers and restaurants that do good business there, recent development of additional apartments and medical office buildings, and the involvement of the Richmond Economic Development Authority, which owns about 40 acres that make up the mall’s parking lots.

“We have a very dynamic residential environment that has been developing around it over time; we have strong office – a couple of those buildings related to VCU and VCU Health – that are in the vicinity of the fashion park,” Olinger said.

“We believe that it still has a strong future as a destination in and of itself. We want to continue to build on that destination and see what that might be.” 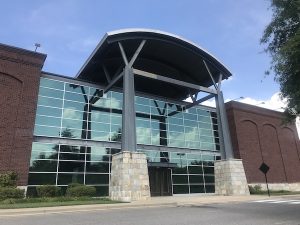 The former Dick’s Sporting Goods space has been vacant since late 2018. (Mike Platania)

Noting Chesterfield County’s investment in the former Cloverleaf Mall site’s transformation into the Stonebridge development, and similar efforts by Henrico County with Regency mall and Virginia Center Commons, Olinger said a comparable transformation is due for Stony Point. He did acknowledge several challenges, its ownership status among them.

Noting talks in recent years between the EDA and the mall’s then-owner, Starwood Capital Group, about potential enhancements to the site, Olinger acknowledged the transfer to a special servicer that followed Starwood’s default on loan payments throws a wrench into those plans. Connecticut-based Starwood purchased the nearly 700,000-square-foot mall, which opened in 2003, from original developer Taubman Centers for $72 million in 2014.

“We had discussions with the ownership interest in Stony Point over the last couple years about doing some things that I thought were pretty interesting,” Olinger said in the presentation. “The market realities have made some of them not moving ahead now, but it’s worth having that discussion further on.”

Other challenges planners noted include the site’s low visibility for retailers and its one-way-in, one-way-out reliance on Chippenham Parkway, with no connectivity to established residential neighborhoods nearby. Past proposals have faced opposition from neighbors who have likewise challenged other aspects of the site’s development, such as the addition of the James River at Stony Point apartments. 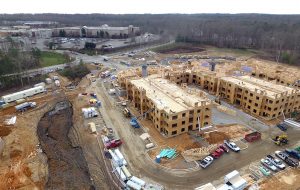 The James River at Stony Point apartments, shown under construction in 2017, filled a 27-acre site near the mall’s Dillard’s-anchored northern end. (BizSense file)

Olinger also cited the process involved with amending the city’s community unit plan for Stony Point, which he noted involves more than 500 acres beyond the mall’s roughly 60-acre site. According to Richmond 300, 72 acres in the vicinity of the mall were vacant or underdeveloped last year, representing 27 percent of the site’s total land area.

The draft plan recommends rezoning the mall site and developing a small area plan with community input to encourage redevelopment and creation of streets, parks and greenways. A marketing plan is encouraged to attract businesses and potentially a corporate headquarters, and the plan calls for a mix of housing options with low-income and market-rate housing blended together.

Expanding transit service to the site is listed as a priority, and the plan also suggests improving connections with Huguenot Road and the nearby Larus Park, which lies between the mall and Stony Point Shopping Center, which recently landed the region’s second Trader Joe’s grocery store.

Olinger also noted the community unit plan for Stony Point has a site set aside for a hotel. He said such additional uses could further enhance the site as both a neighborhood and a destination.

The draft Richmond 300 plan can be viewed on its website. Public comment on the plan is being accepted through Monday, July 13.

Follow these links for previous coverage on the plan’s suggestions for Jackson Ward, Scott’s Addition/Hermitage Road and areas in Southside.

It be hard for some to get there because GRTC no longer has a bus running to it. I would suggest developers to talk to GRTC about that as it would benefit both.

Malls should think about being the downtown of modern life. Include a

The idea of adding a through road makes a lot of sense. Right now, it’s a dead end, and getting deader by the moment. I don’t think it can survive in isolation.

Adding a Target, Stein Mart, or TJ Max would help. Too many high end stores now operating in the mall.

This mall needs access to the surrounding neighborhood. The greenway trails are a welcome addition, but there needs to be vehicle access to Huguenot Road (through Stony Point Parkway). Many residents have fought this for years, but as the neighborhood turns over with new residents it needs to become a priority. I live less than 1/2 mile from the mall, yet I have to drive 5 miles to get there. Also, the idea of a road bisecting the mall is the dumbest idea I have heard, as it would kill the fountain, which is one of the only things that… Read more »

I still think they seriously dropped the ball when they located all of the residential on the outside of the ring road behind gates instead of integrating it with the mall. Integrating it more closely would have created the opportunity for more foot traffic.

Really hope they add a library and maybe a coworking space. A satellite campus for a local college like VUU or VSU or Reynolds would also be great. Rooting for this area.

I would make Stony Point 50% restaurants and bars on the bottom floor. Not huge venues, just small little restaurants, and upscale bars. Stony Point already has these amazing green spaces and communal areas where you can sit and relax, catch up, have a drink. Keep the upscale shops, it’s cool. Often, we would walk it and say, “Gosh it would be nice to have a glass of wine, maybe listen to some live music.” Imagine a place with about 15 different first floor patio bar venues, all with excellent food. Maybe two open air breweries. Wait; was I describing… Read more »