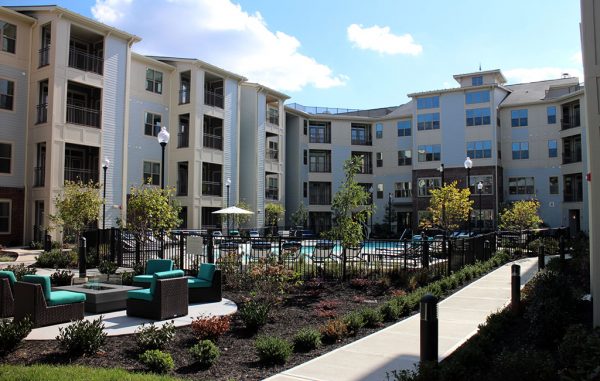 Less than a year since it opened, one of the area’s newest apartment developments has been sold to a new-to-town buyer in one of the biggest local multifamily deals in recent memory.

The 280-unit James River at Stony Point, constructed last year beside Stony Point Fashion Park, sold Nov. 1 for $62 million. That amounts to about $221,000 per door.

The purchase is the group’s first in the Richmond market, and the apartments are its sole property in Virginia, according to Zaremba’s website.

The sellers were Wood Partners and Eagle Realty Group, which were represented by Newmark Knight Frank, formed last month through the combination of ARA Newmark and Berkeley Point Capital. Brokers Drew White, Wink Ewing and Mike Marshall of NKF Multifamily Capital Markets had the listing.

Ewing, whose recent deals with White and Marshall have included the 457-unit Rivermont Crossing, declined to comment on the transaction beyond a prepared release.

The release quotes White as saying that Heritage was drawn to James River at Stony Point’s “record-breaking lease-up pace,” described in marketing materials as averaging over 30 leases per month in its first nine months since opening to residents late last year. The apartments, averaging 1,060 square feet and renting from $1,100 to $1,700 per month, were 98.5 percent leased when the property was listed for sale this summer. 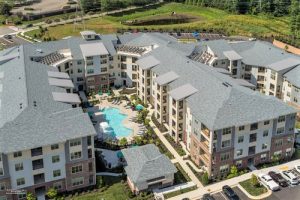 Wood Partners spent $40 million developing the 27-acre property, which consists of 296,800 square feet across three- and four-story buildings with a central courtyard and smaller, two-level buildings with carriage-home apartments above garages.

The courtyard in the middle of the main manor building includes a swimming pool, grills and fireplace area. Other amenities include a fitness center, playground, dog park, and additional grilling and gathering areas between some of the buildings.

While recently opened, the development, formerly called Alta Stony Point, was several years in the making, due in part to a court-ordered injunction that stalled development after the apartments first were proposed in 2013. Opposition from surrounding neighborhood associations prompted the injunction, which temporarily barred the sale of the 27-acre site.

Last year, the 366-unit Copper Spring apartments sold for $54.2 million, while the 340-unit Wellesley Terrace apartments near Short Pump sold to a local buyer for $51.12 million.

The Richmond apartment investment market continues on its impressive run. Players from out of town are putting more dollars in our region to satisfy our housing appetite. Thousands more of these upgraded rental homes are in the pipeline here .
Still we face a crisis in providing suitable affordable housing for those working at low and moderate income levels. Not everyone needs resort style pools and clubhouses, but we all need safe, secure homes with proper heat and water, free of vermin. That’s the challenge that faces every community and Richmond is no different .