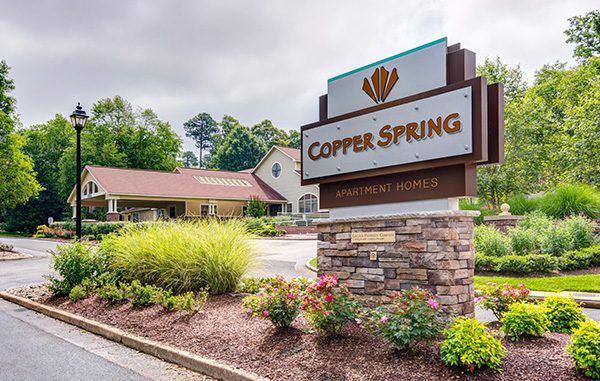 An out-of-town buyer has marked its entry into the local real estate market with an eight-figure purchase in western Henrico County.

The seller was Copper Springs LLC, an affiliate of New York-based Clarion Partners that purchased the property in 2011 for $36 million. The latest county assessment valued the property at $38 million.

The purchase is the first in metro Richmond for StoneBridge, a 37-year-old company that invests primarily in multifamily properties. The firm, which has offices in D.C. and Amsterdam, works exclusively with investors in the Netherlands and has acquired and developed more than $1.7 billion in real estate in the D.C.-Baltimore area, the Carolinas, Georgia, Florida and Texas.

“We liked the fundamentals of the market – maybe not as flamboyant as some other markets in the United States, but very solid, especially in the Henrico County submarket,” Bruggen said. “The Short Pump retail that has been developed over years – we liked the overall demographics.”

Built in 1989 and renovated in 2006, the 30-acre Copper Spring property consists of 23 two- and three-story buildings and an unused 1.25-acre parcel that is available for development. Located at 3301 Copper Mill Trace, the property straddles Mayland Drive between Tuckernuck Drive and Pemberton Road, east of Gaskins Road and between Interstate 64 and West Broad Street. 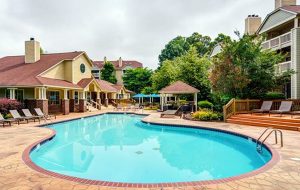 StoneBridge is planning upgrades to the pool area. (StoneBridge Investments)

Monthly rents range from $980 for a one-bedroom unit to $1,280 for a larger two-bedroom. Amenities include two swimming pools, Wi-Fi, a fitness center, a business center, lighted tennis court, racquetball court, shuffleboard and playground.

“The submarket has seen slow organic growth, so we’re not underwriting some aggressive rent increases for this property,” Bruggen said. “We see it as a fairly low-risk, and maybe also low-return, investment for cash in the bank.”

Bruggen said StoneBridge is planning upgrades to the pool and grilling areas, new furniture and painting for the clubhouse, an expanded fitness center, painting and landscaping, and “limited” renovations to units over time with hard-surface flooring, lighting and stainless steel appliances.

Bruggen said Copper Spring is the first of more investments for StoneBridge in and around Richmond.

“We think it’s a solid market. We think you get a little bit extra return in that Richmond submarket, which is always nice,” he said. “It’s a little bit less volatile than some other markets.”

The Copper Spring purchase is one of the priciest local apartment deals in recent memory, surpassing the 340-unit Wellesley Terrace apartments that sold in July for $51.12 million.

It’s also the latest 1980s-era apartment property to sell to new owners in that part of Henrico, particularly along the multifamily-heavy Mayland Drive corridor.

The sale surpassed Wellesley Terrace in gross but not per unit! But it’s one heck of a number regardless. There are some more surprises to come too. This will be a hot 2018 for Apartment community sales.