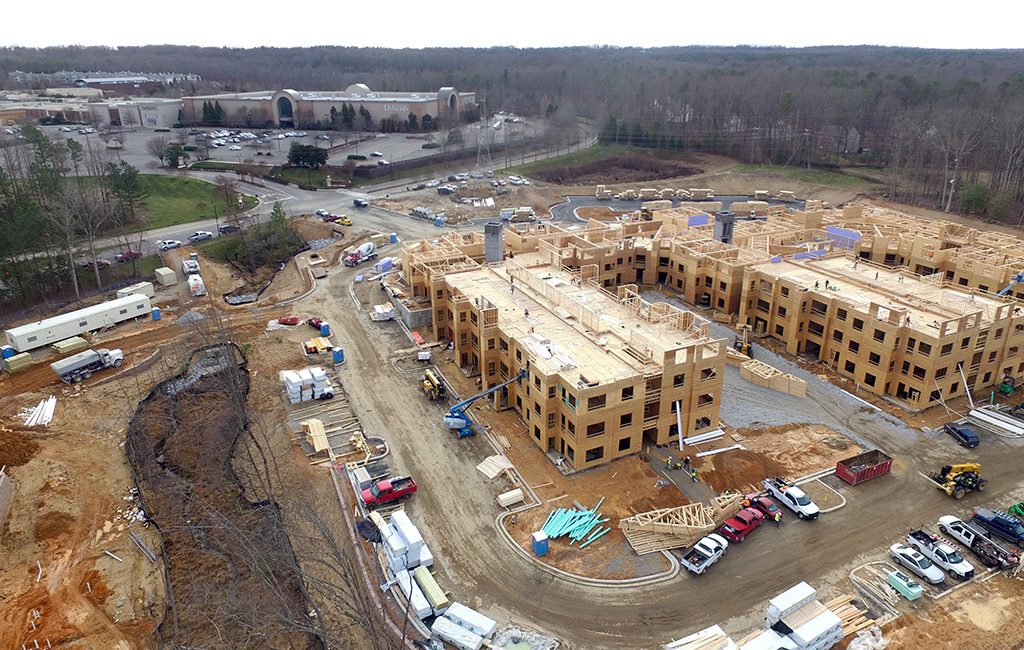 The apartments under construction at the 27-acre site just north of the Dillard’s at the mall’s northern end. (Kieran McQuilkin)

Editor’s note: This story has been revised from its original version to include input from the developer received after deadline.

Formerly called Alta Stony Point, the $40 million project was approved in 2013 for 282 apartments in four three- or four-story buildings and a handful of smaller carriage units. The building under construction now will be the largest of the bunch and is slated to come online around July, said Carter Siegel, a regional director with Wood Partners.

The apartments were first proposed in 2013 but stalled the following year when opposition from surrounding neighborhood associations culminated in a court-ordered injunction, which temporarily barred the sale of the 27-acre site just north of Dillard’s at the mall’s northern end.

Five months later, a circuit court judge filed an opinion and order allowing the property’s then-owner, an affiliate of Stony Point Fashion Park developer Taubman Centers, to sell the land without violating a 2001 agreement with the Huguenot Farms Area Association that restricted development to office and retail uses. The association represents about 250 residents in the Stony Point area and sought to make the injunction permanent. 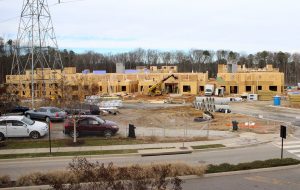 The construction as viewed from the Dillard’s parking lot. (Jonathan Spiers)

Taubman sold the land for the apartments last April for $5.52 million, to Wood Partners’ Alta Stony Point LLC. Wood Partners previously had pulled out of a contract to buy the land in light of the injunction, which effectively ended with the court order filed in November 2014.

Around that same time, Taubman sold the mall to Connecticut-based Starwood Capital Group for $72 million as part of a seven-mall deal totaling $1.4 billion. The deal did not include the adjacent development site, or the mall’s Dillard’s and Saks Fifth Avenue stores, which are owned by those retailers.

Starwood has since announced a $50 million plan to upgrade Stony Point’s outdoor areas and add retail options to the mall, which opened in 2003.

Reached Thursday, Siegel said little has changed with the development from what was approved two years ago, other than the name change to James River at Stony Point. The small-village-style project will include 104 one-bedroom, 154 two-bedroom and 24 three-bedroom units.

Rental prices have yet to been determined, but Siegel has said they would be comparable to properties nearby.

Those include the Creek’s Edge at Stony Point apartments on the opposite side of the mall, developed by Richmond-based Commonwealth Properties. Monthly rents there range from $1,135 for an 800-square-foot one-bedroom, one-bath unit to $1,230 for a 1,100-square-foot, two-bedroom, two-bath unit.

Siegel said rates would be set about three months before the units hit the market. He said the product will be high-end for the area and include elevators in the larger manor building, where courtyards and other amenities will be located.

“We’re biased, but it will be one of the nicer deals in that part of Richmond,” Siegel said.

While a portion of the property extends to the nearby Cherokee Road to the north, Siegel said no vehicle or pedestrian access will be added there, per the zoning agreement approved by the city.

Construction is expected to exceed eight months, the time frame originally stated for the project. Wood Partners is serving as the general contractor and builder, and North Carolina-based Cline Design was the architect on the project. Design Resource Group and Richmond-based Timmons Group provided planning and engineering services.

James River at Stony Point marks the first project for Wood Partners in the Richmond area. It has other properties in Northern Virginia, Charlottesville, Chesapeake and Harrisonburg, as well as in other states.

The apartments are the latest addition to an evolving campus around Stony Point Fashion Park. VCU Health recently celebrated the completion of its new 60,000-square-foot medical office building on the opposite side of the mall.

Thank you for this report. I’ve been wondering about this project, glad to get more details. I’d love it if this property actually connected down to Cherokee Road or in some way provided a bike/pedestrian connection into Stony Point Fashion Park for the public to use. More non-motorized connectivity would allow for many of us to become better patrons of the retail and food at the shopping center.

After the update to this story…drat. Missed opportunity, but the whole area needs to be reconsidered for its recreational and non-vehicular transit opportunities, not just Stony Point Fashion Park. –> “While a portion of the property extends to the nearby Cherokee Road to the north, Siegel said no vehicle or pedestrian access will be added there, per the zoning agreement approved by the city.”

On the flip side, as somebody who regularly bikes Old Gun / Cherokee, its good to know that there wont be new completion from automobiles for the narrow road space. Yeah, would be nice to have pedestrian / bike access from this to Cherokee, but glad no new cars.

It never occurred to me that there was not enough space on a narrow, hilly, and curvy road for both cyclists and motorists. I love riding my 4-wheel recumbent quadracycle up and down Old Gun Road. People are so nice here, and they often honk when passing by at 5 miles per hour (my max speed is 2 mph going up the hills) and some even point at me with their finger.

I too would like to know if this property will actually connect to Cherokee. A lot of bikers use Cherokee as part of their climb up Old Gun.